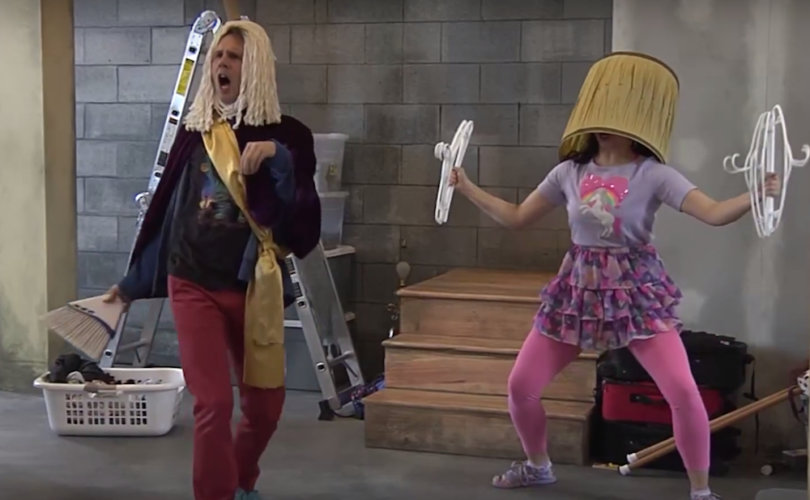 A scene from Boys, Girls and Other Mythological Creatures

ST. CATHARINES, Ontario, May 5, 2017 (LifeSiteNews) — The Niagara Catholic District School Board is facing a media spotlight and suggestions of “transphobia” for canceling performances of a play about gender identity that were booked in five elementary schools.

Produced by the St. Catharines-based Carousel Playhouse, which lists Pride Niagara as a community partner, the play is called Boys, Girls and Other Mythological Creatures and features an 8-year-old boy who dresses as a girl and questions his gender.

The cancellations came within 48 hours of the first performance of the play in the Catholic school district, for Grades 1 to 4 students at Mary Ward School on April 25.

“In the play, Simon(e) feels boxed in by the restraints of gender,” wrote Carmichael. “I fear these cancellations may be based on misinformation, grown out of fear, intolerance, transphobia, homophobia and misogyny.”

Playwright Crawford, whose work includes a play about a homosexual couple setting up a bed and breakfast, was even more blunt.

“Simon is afraid of what will happen if they express who they really are,” he wrote.

“I get afraid … when the motivating factor for canceling performances of this play is a few adults’ own fear, prejudice, and hatred.”

And then Carmichael went to the press, because the board “would not speak to me,” she told LifeSiteNews.

The story was picked up by the Globe and Mail on Tuesday, and by Thursday made it to the CBC and Reuters, much to playwright Crawford’s delight, who tweeted the same day:

Whoa! It's not everyday a children's play makes international headlines. And here I was just trying to write a fun show… https://t.co/NkZmZilrOL

On Wednesday, Education director for the Niagara Catholic school board John Crucco released a statement that after the play’s first performance at Mary Ward, “it was brought to the attention of the board” the play was “not age-appropriate for a predominantly primary audience.”

Moreover, the play “was not originally presented as a play about gender identity,” which required discussions with students both before and after the play to “discuss how the plays [sic] message aligns with various curriculum expectations,” he said.

Crucco told the Globe the principal at Mary Ward contacted superintendent Mark Lefebvre after seeing the play with this concern.

In the sex-ed curriculum set by Premier Kathleen Wynne’s Liberal government, the “Grade 3 curriculum … begins to talk about cultural values, beliefs, gender identity, sexual orientation, etc.,” Crocco said in the Globe report. “There were students [at the play] in Grade 1 and 2.”

Clinton Somerton of Campaign Life Coalition, which has been fighting the Liberal sex-ed curriculum, praised the Catholic board for its actions.

“Pope Francis condemned attempts to indoctrinate children into gender ideology, expressing outrage over such sexual propaganda by saying 'Today children – children! – are taught in school that everyone can choose his or her sex … And this is terrible!’” Somerton told LifeSiteNews in an email.

“So the Niagara Catholic District School Board was wisely following the Holy Father's guidance by protecting its students from the psycho-sexual molestation of this theatre group's propaganda-in-a-play.”

At the same time, the Catholic board  “should not to be afraid of the bludgeon-words ‘homophobe,’ ‘transphobe’ and the like, that are too often used to intimidate decent people into silence and acquiescence to the mental and spiritual molestation of their children,” Somerton said.

“On the contrary, NCDSB needs to be bold and outspoken in its commitment to protecting children, and in calling out these pan-sexual ideologues as child abusers,” he wrote.

“It is our collective failure to resist the sexual militants that has allowed the situation to deteriorate to the point where such groups can virtually demand access to little children while fearful adults stand gaping and blinking helplessly.”

What did the Catholic board know?

Crucco was to meet Friday with Carmichael, who contends the NCDSB’s statement is inaccurate.

So does Crawford, who tweeted Thursday:

The board “booked the play knowing full well what the play was all about,” Carmichael told LifeSiteNews.

Carousel Playhouse works with consultants from both the Catholic and public Niagara school boards, and the arts consultant for the Catholic board, Teri Cristelli, “sat on our committee, and helped us write our themes and curriculums connections which we send out with all of our marketing materials,” she said.

“So that description we send out about the play is always accompanied, paired, with a following message which tells them what the themes and curriculum connections are, which include self expression and gender.”

According to Crucco’s statement, the arts consultant “was aware of the play, based on the description Carousel Players provided, but was not present at a meeting with Carousel Players when the discussion regarding the curriculum links or themes took place.”

Carmichael also says the Liberal sex-ed curriculum calls for discussion of gender identity and gender expression from Grades 1 to 8.

The Catholic board is saying that “gender, anything to do gender nonconformity, gender fluidity, is not something to be discussed with those young age groups, but it is,” Carmichael told LifeSiteNews.

Nor does being Catholic make any difference to how the curriculum is taught, in Carmichael’s view.

“They are publicly funded, they can’t just make their own decisions, otherwise they shouldn’t be taking public funding, because this is mandated across the board,” she said.

“It’s something they have to uphold in their schools; they can’t pick and choose how they are going to do that.”

Knights of Columbus comes to the rescue

The performance at Mary Ward was donated by the Niagara Knights of Columbus Council, but financial officer Gary Tappay says he had no idea about the play until he read a review in the local press.

“We paid $500 well in advance, and we asked them to make sure it was cleared by the Catholic school board for content and theme, and I never heard anything about it until I read the article,” Tappay told LifeSiteNews.

He became alarmed because the article said Carousel Players had consulted with Pride Niagara and that the play would be staged at First Ontario Place at St Catharines.

“That’s when it twigged on me, this is going to be playing to an adult audience,” Tappay said. “Surely this is not the same play they’re going to be present at Mary Ward School. It was.”

Tappay said he called Carousel Playhouse, but he remained concerned, and then got an email that Carmichael would be in touch with Joseph Tornabuono, principal of Mary Ward.

He then called Tornabuono, who agreed to attend the performance with Tappay and Fr. Paul MacNeil, trustee and chair of the Niagara Catholic school board, “to use this more or less as a test case the first Catholic elementary school to view it,” Tappay said.

The three “all agreed it was not appropriate,” Tappay said.

Fr. MacNeil has not responded to a LifeSiteNews request for comment.

No other Catholic schools have booked the play, Carmichael told LifeSiteNews. One elementary school in Niagara’s public school board cancelled, as did one in Hamilton-Wentworth District School Board, according to NiagaraThisWeek.

However, “a total of 25 schools have seen the play now and six more are booked. Our tour ends May 13th,” Carmichael said.

Indeed, while pro-family advocates are glad the NCDSB cancelled the five performances, they warn it won’t stop schools from promoting gender ideology to children, including those as young as six years of age.

The Liberal sex-ed curriculum is a “clear and present danger to their precious little ones” and they must continue the battle against it, he told LifeSiteNews in an email.

“Even more pressing is the danger of this anti-scientific, new gender theory being pushed as if it were fact,” he added.

“I praise the school board for canceling this dangerous play but regret they didn’t use it as a teaching moment to set others free with the truth, as Jesus instructed,” Fonseca said.

“I believe we – including Catholic educators and Bishops – need to start explaining with clarity and plain speech, that gender identity theory is extremely harmful to children and should never be taught in schools.”

“It’s appalling for any school board, let alone a Catholic one, to use a cutesy play to force gender ideology, and whatever the the latest social fad is, on kids who are nowhere near equipped to process this information,” she told LifeSiteNews.

“What other new ways will people come up with to force this propaganda on our kids? Enough is enough,” added Granic Allen, a mother of four. “Leave our kids alone.”