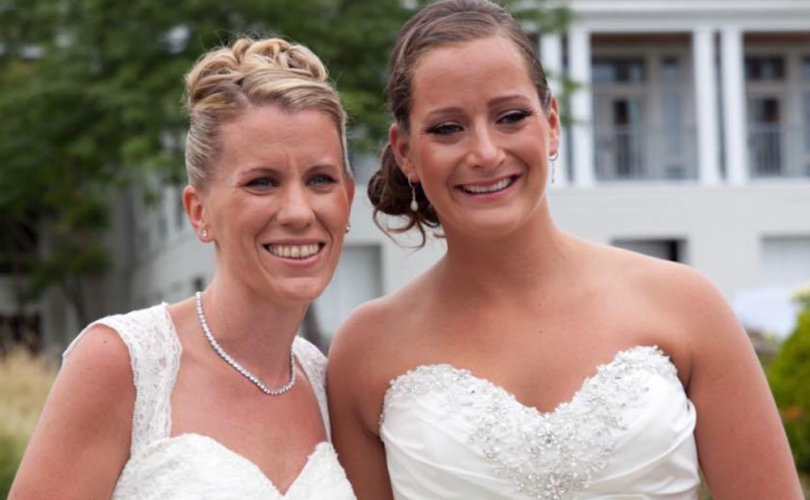 Drumgoole was fired as dean of guidance and head girls basketball coach after administrators learned she was “married” to another woman, which the school conceded in court last August, arguing it did not violate discrimination law because of the expectation for employees to abide by Catholic Church teaching.

“She was terminated for violating the Ministerial Policies and the Code of Ethics — in failing to abide by the tenets of the Roman Catholic faith, i.e. by entering into a same-sex ‘marriage,’” the school’s motion had said.

Additionally, Drumgoole had signed an agreement more than once since she was hired to follow the Roman Catholic Church’s tenets, which was part of her collective bargaining contract.

The superior court judge had ruled that further discovery was warranted, saying in particular the court must look at whether Drumgoole had worked in a ministerial capacity and therefore whether the dispute is secular or ecclesiastical. The judge also denied a second attempt by the school and the archdiocese to have the lawsuit dismissed in October.

An attorney for the archdiocese and the school then filed a motion with the Superior Court of New Jersey Appellate Division on November 9, NorthJersey.com reported, and the order was denied December 9.

“We note that the trial court’s denial of defendants’ motion for dismissal based upon claimed religious exemption grounds is without prejudice, in order to accommodate the discovery relating to plaintiff’s status and functions germane to the exemption issues,” Judge Jack Sabatino wrote in a decision reached with Judge Heidi Currier.

The archdiocese confirmed to LifeSiteNews in August that it does not comment on matters in litigation, though Newark Archbishop John Myers defended Paramus Catholic High School shortly thereafter.

“Every religious organization has the right to promote and define its own identity, mission and message,” he said in a statement.

“Every religious organization has the right to ensure that people in that religious organization support and promote its beliefs and teaching,” Archbishop Myers continued. “When someone involved in Catholic education ministry offers a public counter-witness to Catholic teaching, he or she does not teach the Truth or further the mission of the Church. Such actions can create confusion and uncertainty in the moral formation of the young people he or she encounters.”

Drumgoole’s attorneys have argued her duties were not ministerial and that because Paramus Catholic uses some of the New Jersey Law Against Discrimination in its faculty handbook the school is liable to all of the laws against discrimination.

Discovery phase in the case is expected to last roughly a year.

The school’s president and principal were placed on leave in September, according to NJ.com, but the archdiocese declined to say why. Stephanie Macaluso returned as principal after a week, but president James Wail, also named in Drumgoole’s suit, is still on leave.

Thousands among the school’s alumni and parents signed an open letter in August pushing the school to formally apologize, rehire Drumgoole and adopt anti-discrimination policies based upon “gender identity” and “marriage status.”

In a statement defending the school’s removal of Drumgoole, Archbishop Myers wrote, “It seems that many have equated, mistakenly, the Church’s position of welcoming sinners (for we are all sinners) with the notion that we accept teaching and lifestyles contrary to the principles of our faith that can create scandal in our Church.”

“Even Jesus recognized that some people could not or would not accept His teaching,” the archbishop said. “He was saddened when they walked away from Him, but He never altered His teaching. Nor shall we do so today.”