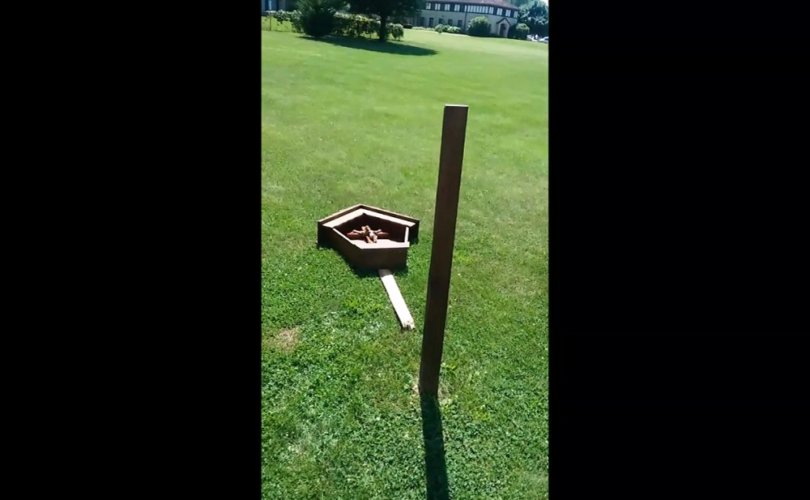 ROCKFORD, Illinois, July 28, 2020 (LifeSiteNews) — A roadside shrine in the Catholic parish of Saint Bernadette in Rockford, Illinois has been vandalized and destroyed twice within three weeks — but the community is determined to rebuild it “a thousand times,” if necessary.

The little shrine with the message “Jesus loves you” houses a crucifix and is located close to a bus stop in front of the church.

On July 5 or 6, the first act of vandalism took place, as reported by The Observer, the newspaper of the local diocese. “Parish staff member Kevin Rilott had recently restained the wood of the shrine, which has been in place on the parish campus for about five years. He says he could tell from marks on the wood that the corpus statue was destroyed by a hammer.”

Rilott speculated that the shrine was vandalized “in imitation of the destruction perpetrated the past several weeks against statues, including religious statues, around the country.”

On July 24, “someone took a sledgehammer to our rebuilt shrine and destroyed it again,” the parish announced via Flocknote, a popular tool parishes use to communicate with the faithful. “We will rebuild it again.”

Instead of destroying the crucifix, the pole on which the shrine rested was broken in half.

“This shrine is an image of the love of God in giving His life on the Cross for each one of us — it is a sign of faith, hope, and love for our community,” wrote the parish. “So how could it possibly be good news that it was destroyed again?”

“Because the people of St. Bernadette Church are a people of love and life,” the message pointed out. “Whoever is destroying this shrine has some kind of false idea of who Jesus is. We like our shrine at St. Bernadette but the soul of the person or persons doing this is infinitely more important than our roadside shrine.”

The parish encouraged its faithful to pray and make sacrifices “to seek the graces and blessing of God for those in need — and the person or persons who have been destroying our shrine are certainly poor in faith and it is our responsibility and blessing love and pray for those who are poor and in need.”

A short video showing the destroyed shrine was posted on YouTube by Kevin Rilott, explaining that the parish had experienced vandalism in the past. “Last summer, we had some banners out front on church property [that] simply said ‘Jesus loves you’ and ‘God loves you.’ Those were vandalized. Someone ran over them with a car.”

Additionally, the parish “had a pro-life display at this church with crosses to represent the lives of the beautiful unborn children who died by abortion. Somebody vandalized that.”

Responding to increasing numbers of acts of vandalism, a White House official stated that the “criminals” who have carried out the violent attacks will be prosecuted “to the fullest extent of the law.”

The unnamed official told The Daily Caller that President Trump has joined “the Catholic community in solidarity” during the wave of attacks on Catholic religious symbols.

“Rest assured, President Trump will always demand law and order in American communities, and ensure the criminals causing these sacrilegious acts will be prosecuted to the fullest extent of the law,” he explained.

A new interactive map is keeping track of attacks “on Catholic statues, parishes and persons in North America in 2020.” Launched by Complicit Clergy, an organization of laypeople attempting to hold Catholic clergy accountable for sexual perversion and corruption, the new project already lists more than 50 incidents in the United States and Canada.

In perhaps the most disturbing attack, a 24-year-old set fire to Queen of Peace Catholic Church in Ocala, Florida. He drove his car into the church and proceeded to light two gallons of gasoline on fire. Parishioners were inside the church preparing for Mass but were able to flee without injury.

Meanwhile, Catholics responded to the attacks with love and generosity. In Boston, Massachusetts, dozens of Catholics, including many members of religious orders, attended a prayer vigil in front of a statue of Our Lady that was set on fire.

Fr. John Currie, the pastor of the local parish, said during the event, “We’re prayerfully saying to this person or persons: We love you. We forgive you. And we are here to serve and help you in any way you may need. This is why we’re here primarily.”