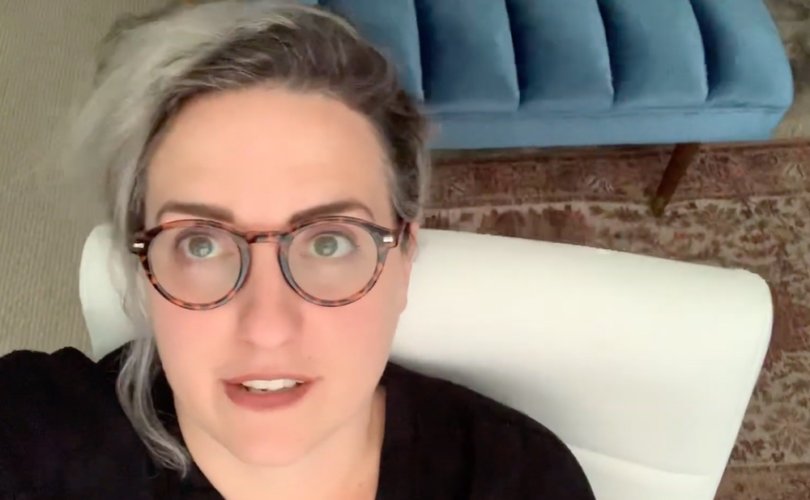 “Happy #Pride month. I love and celebrate you,” Assad had tweeted Sunday.

While Assad’s tweet garnered support from some followers, many pushed back against her implicit support for lifestyles and choices that conflict with Catholic sexual teaching. The Catholic Church teaches that God does not make anyone homosexual and calls same-sex attraction “objectively disordered.” The Church holds that experiencing same-sex attraction is not sinful, but acting on such inclinations are gravely sinful and could lead such a sinner to eternal separation from God for eternity if such a sinner were to die in a state of unrepentance. The Church calls homosexual acts “intrinsically disordered,” stating that “under no circumstances can they be approved.”

Some of Assad’s Twitter followers advised her that pride month could not be supported in good conscience by Catholics. Some suggested instead celebrating chastity or the Catholic devotion for June to the Sacred Heart of Jesus.

Shock, devastation, disheartenment, and disappointment were among the terms some followers used to describe their response, at least one saying they would be removing Assad’s music from their phone and others saying they’d be un-following her.

A number of her same-sex attracted Catholic followers expressed discouragement at her endorsement of pride events in response, because of the challenge they face in being celibate as Church teaching instructs. Catholics voiced dismay elsewhere on social media as well; lamenting how many publicly identifying Catholics have fallen in with support of the LGBT movement. Earlier this month, Catholic composer David Haas, known for such hymns as “Blessed are They,” “You Are Mine,” and “Servant Song,” composed a chant to celebrate “pride month.”

LGBT activists and others celebrate homosexual pride month in June each year to commemorate the anniversary of the 1969 Stonewall Riots. The series of riots in New York City’s Greenwich Village occurred after a police raid on the Stonewall Inn, an establishment frequented by homosexuals. The riots launched the modern LGBT movement.

Pride events, in particular parades, are known for sexually charged dress and behavior, frequently including nudity and public sex acts.

“I hear and see a lot of you experiencing confusion about my #pride post,” she said. “Those of you who are sticking by me even though you don’t share my feelings, thank you. Those of you who feel a need to unfollow or disown me in some way, thank you too.”

“I’m not going to get into details or explanation here right now,” she said, “because I’m simply more interested and invested in the relationships I have in my life our of which my statement was actually born.”

“I love and celebrate my gay/bi friends,” continued Assad, “and I trust providence to guide us all deeper in to love and truth and healing, whatever that looks like.”

Assad, 35, originally from New Jersey and the daughter of an American mother and an Arab-American father of Syrian descent, was raised Protestant and entered the Catholic Church in 2007. She resides in Nashville with her husband and two young children.

She has released 10 albums since 2008, her debut winning Christian album nods on Amazon.com and iTunes, and she has worked or toured with other popular Christian music artists.

Assad has a Catholic following and has performed at Catholic venues, including World Youth Day.

She has used her platform to speak out about the harm of addiction to pornography, drawing her witness from her own experience with pornography addiction as a teenager, and she is open about her personal struggles involving faith or other matters.

That she would express support for the LGBT movement’s “pride” month distressed Catholic fans within a culture where many Catholic celebrities and politicians openly support issues in contradiction with Church teaching, and a majority of the U.S. Church’s are bishops unwilling to address the matter or its resulting scandal, raising the question of their potentially being in agreement with the dissenters.

The Church teaches that sexual relations are reserved for marriage, which is between a man and woman (CCC-2360). Church teaching also states that homosexual tendencies are objectively disordered, and that individuals who experience them “must be accepted with respect, compassion, and sensitivity. Every sign of unjust discrimination in their regard should be avoided” (CCC-2358). However the Church also says that homosexual acts are “acts of grave depravity” and they “are intrinsically disordered” (CCC-2357). The Church states as well that, “homosexual persons are called to chastity” (CCC-2359), which is also what its teaching says about all people.

The Church’s Catechism states, “Everyone, man and woman, should acknowledge and accept his sexual identity,” and the Church opposes the concept of gender fluidity, as Church teaching holds that God created humans as male and female and that God does not make mistakes. “The unity of body and soul is so profound” that a person’s biology as either male or female “forms a single nature” with their soul, Church teaching says, rendering it impossible for them to exist in the ‘wrong’ body and thus impossible to change one’s sex.

Assad has been open about her accepting attitude toward homosexuality previously, and also expressed doubt about Church teaching on social media and in interviews.

She has spoken more than once on social media about being a viewer of the Netflix “Queer Eye” reality program, and a few years ago she questioned the Church’s teaching that an individual’s identity is separate from their sexual inclinations.

In a 2018 interview, Assad voiced doubt on the existence of hell, and in answer to the question of whether contraception was sinful, she said the contraceptive industry was disturbingly patriarchal and that the Christian conversation about the issue was problematically patriarchal. In that same interview she said she was pro-life, but placed gun issues and the death penalty on the par with abortion.

Earlier this year in an interview Assad had said she didn’t have extreme moral objections to anything anymore, and expressed doubt that Church teaching across the board was ultimately inspired by the Holy Spirit.

Explaining that she felt conflicted about performing at World Youth Day due to where her faith journey has led her, she said, “I’m still a Catholic, but I have absolutely expanded what it means to be a person who walks with God.”