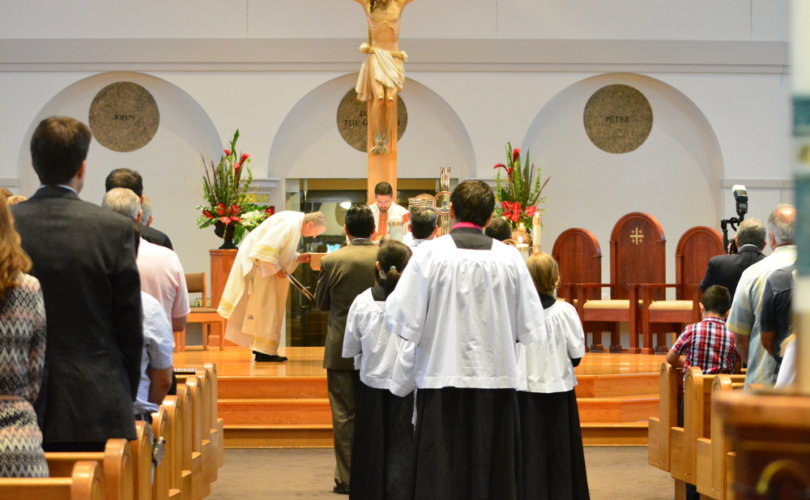 Father Christopher Plant, pastor of St. Bartholomew the Apostle Catholic Church in Katy, Texas,  announced the crime Monday morning on Twitter, calling it a “criminal sacrilege” and revealing that police are investigating the theft.

While the perpetrators have not been identified, some are speculating that members of the radical pro-abortion group Ruth Sent Us may be responsible, considering the group announced Saturday on Twitter, “We’ll be burning the Eucharist to show our disgust for the abuse Catholic Churches have condoned for centuries.”

The avowal of destruction was declared in response to an announcement that the pastor of St. Joe’s Catholic Church on Capitol Hill had called on police to be “ready to intervene” if pro-abortion protestors attempted to disrupt Mother’s Day Mass, as Ruth Sent Us has encouraged pro-aborts to do, because, in their words, “six extremist Catholics” — a reference to the generally conservative Supreme Court Justices — have “set out to overturn Roe.”

The group disrupted a Mass on Sunday, May 8 at the Cathedral of Our Lady of the Angels in Los Angeles in protest of the potential overturning of Roe v. Wade.

The pro-abortion group also addressed Twitter user Barbara Martin, who pledged to offer “rosaries this weekend for the protection of the clergy and Mass-goers, the police/security, and for the safety and change-of-heart of the pro-abortion protestors.”

“Stuff your rosaries and your weaponized prayer,” Ruth Sent Us replied. “We will remain outraged after this weekend, so keep praying,” they wrote before announcing their intention to “bur[n] the Eucharist.”

When one Twitter user remarked that the anger with which some were responding to “the ‘threat’ of basically setting fire to a small pile of bread” was “rather amusing,” a Catholic responded, in reference to the Eucharist, “Considering it’s actually God Himself, it’s pretty damn serious.”

On May 7, the “Ruth Sent Us” Twitter account replied to this protest that the Eucharist is God Himself, “We don’t care about your make believe or your God.”

The hosts kept in tabernacles in Catholic churches are consecrated. According to Catholic Church teaching on transubstantiation, the host of bread, once consecrated by a priest, becomes the true Body and Blood of Jesus Christ: “Under the consecrated species of bread and wine Christ himself, living and glorious, is present in a true, real, and substantial manner: his Body and his Blood, with his soul and his divinity.” (Catechism of the Catholic Church 1413)

Fr. Plant, who is on sabbatical and unavailable for comment to LifeSiteNews, asked for prayers for his church as well as for those responsible for the sacrilegious theft.

Martin responded to the group’s pledge to burn the Eucharist, “I was trying to avoid adding fasting, too, because I’m greedy and a sinner, but fasting it is. St Michael the Archangel, defend us in battle.  Be our protection against the wickedness and snares of the Devil.”