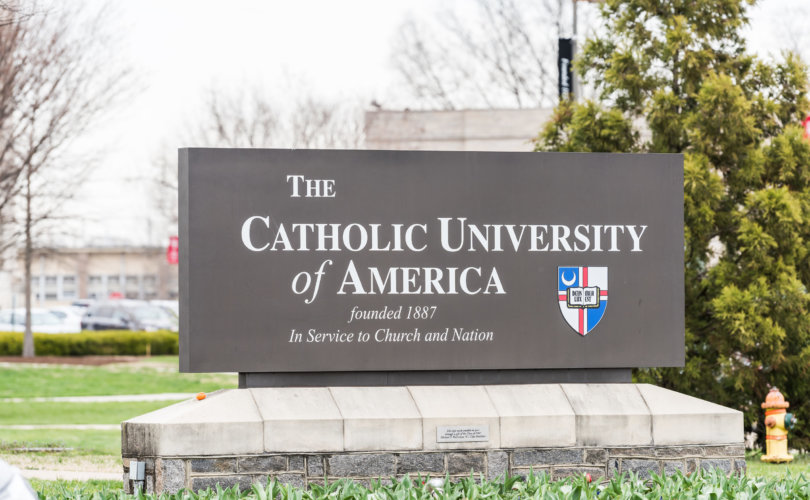 The university’s long-time president, John Garvey, 72, announced his resignation Wednesday, writing in a statement that he “began a conversation with the board of trustees about stepping down at the end of this academic year” around six months ago. “The board recently accepted my request, and I write today to inform you that I will end my service as President next June 30,” he wrote.

“The time has come to turn the responsibility over to those younger minds and stronger lives,” added Garvey, a constitutional lawyer and former dean of Boston College Law School. Garvey is the third lay president of CUA, a papally chartered university in Washington, D.C., and the only university founded by the U.S. bishops.

President Garvey’s 12-year tenure at CUA has met with mixed reactions from faithful Catholics. Under his leadership, the university notably reintroduced single-sex dorms, banned pornography from the school’s WiFi, and took legal action against the Obamacare abortifacient and contraception mandate.

Garvey has drawn criticism, however, for hiring an openly pro-LGBT dean last year for CUA’s social work school, despite having fired conservative professors for social media posts, and for defending heretical, dissident Fr. James Martin. At the same time, he has managed to head off some of the most radical demands of the university’s increasingly liberal students and faculty, blocking repeated calls from the faculty senate to impose a COVID vaccine mandate this year, for example.

As a rare university with an officially pro-life, pro-family mission, CUA remains one of just 19 higher education institutions in the United States still recommended by the Cardinal Newman Society.

But the makeup of the university’s new presidential search committee suggests that’s likely to change.

According to an email from Catholic University on Wednesday, the search committee features several high-profile, pro-LGBT names, including the committee’s highest-ranking cleric: Cardinal Joseph Tobin, archbishop of Newark.

Tobin, elevated to the cardinalate by Pope Francis in 2016, has gained a reputation in recent years as one of the most dissident, pro-LGBT prelates in America.

For years, Tobin has supported LGBT “Pride Masses” in Newark, personally hosted pro-LGBT retreats, and presided over what numerous priests and seminarians have described as a “homosexual subculture” in his archdiocese.

Among other things, Cardinal Tobin has publicly rebuked Church teaching on homosexuality as “very unfortunate,” hired a homosexual activist as his “senior associate for operations,” and strongly backed the pro-LGBT activism of Fr. Martin. In May, he added his name to a statement by an LGBT organization insinuating that God created homosexual attraction.

The cardinal, whom Pope Francis additionally appointed to the Congregation for Bishops this year, has also been harshly criticized for his handling of sex abuse allegations, including some regarding his predecessor, ex-Cardinal Theodore McCarrick, and for leaving homosexual, abuser priests in active ministry. Archbishop Carlo Maria Viganó has attested that Tobin’s appointment to the archdiocese of Newark was “orchestrated” by McCarrick himself.

Despite Tobin’s clear record of dissidence and mismanagement, Catholic University nevertheless tapped him to help spearhead “the transition process for the next President” as the leading ecclesiastical figure on the university’s search committee.

The committee features two other bishops besides Cardinal Tobin with problematic backgrounds, including Archbishop Allen Vigneron of Detroit, current vice president of the U.S. Catholic Conference of Bishops (USCCB).

The Michigan archbishop is a close associate of Tobin. Vigneron celebrated him as an “outstanding pastor” upon his appointment to the cardinalate and later invited him to lead Detroit’s convocation of priests in 2019. Like Tobin, Vigneron has a history of reported inaction on sex abuse claims and allowed LGBT Masses in Detroit for more than a decade before finally blacklisting LGBT groups last year amid donor pressure.

The third bishop on CUA’s committee, Archbishop Bernard Hebda of St. Paul and Minneapolis, fits a similar mold. Hebda, who immediately preceded Cardinal Tobin as coadjutor archbishop of Newark, has permitted not only LGBT Masses in his archdiocese but an “LGBT parish,” even after the parish invited two homosexuals to take the pulpit with a child they had developed through in vitro fertilization to promote their sodomitic lifestyle during Mass.

Last fall, Hebda was one of several American bishops, including Cardinal Tobin, who backed Pope Francis’ scandalous endorsement of same-sex civil unions, floating civil unions as “a kind of middle way that would allow persons of the same sex in long-term relationships to have legal benefits without a civil redefinition of marriage itself.”

An additional prelate not named to the search committee but well-positioned to influence the choice of Catholic University’s new president is Cardinal Wilton Gregory, archbishop of Washington D.C., chancellor of CUA, and chairman of the university’s Fellows. The Francis-appointed cardinal took over all three posts from disgraced Cardinal Donald Wuerl in 2019.