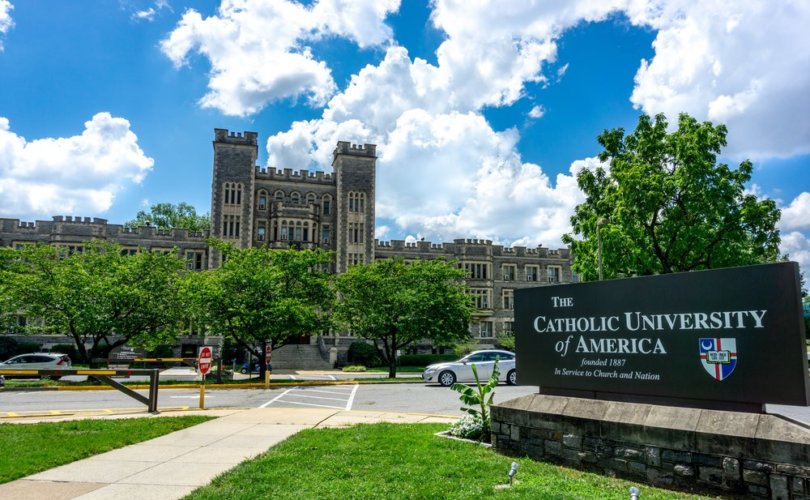 WASHINGTON, D.C., July 27, 2020 (LifeSiteNews) – The Catholic University of America has hired a new dean for its National Catholic School of Social Service who on her personal Twitter account appears to support homosexuality and gender ideology.

Dr. JoAnn Regan, formerly vice president of education at the Council on Social Work Education (CSWE), retweeted a CSWE brochure, titled, “How to Name and Address Anti-LGBTQIA2S+ Microaggressions in Social Work Classrooms.” Regan commented, “This is an important resource for social work educators!”

Regan was also acknowledged in another CSWE brochure “for contributing [her] time and expertise to this project” focused on gender ideology, “Guidelines for Transgender and Gender Nonconforming (TGNC) Affirmative Education.”

This resource claims, for instance, that a “lack of TGNC course content may contribute to transgender students feeling obligated or burdened by having to educate peers about trans-related issues.” Thus, “schools of social work must systematically integrate the most current and affirmative TGNC-specific literature into courses and ensure that assignments, projects, and activities are trans-inclusive.”

The report suggested using “TGNC-inclusive language in the classroom (e.g., asking for preferred names and pronouns; using the most current language associated with TGNC identities when discussing TGNC issues),” as well as featuring “TGNC experts and individuals as guest lecturers or panelists in courses.”

Neither Regan nor the Catholic University of America returned repeated requests for comment.

“The letter identified three tweets that the author called ‘racist.’ One of the tweets, posted to the account on July 8th, 2018, was a retweeted photo of former President Barack Obama with the caption, “[That’s] the Obama we all came to know and hate. Incredibly incompetent and vain. Perhaps he might consider staying in Africa and giving all his money to his people.’”

What on the surface sounds offensive, Tieso put into context in comments to The College Fix. Obama had spoken “at length about his personal wealth, and the poor of ‘his people’ in Kenya (his words). I suggest he might stay in Africa and use his money to help his people.”

None of the tweets mentioned by The College Fix go against Catholic teaching, but they are politically incorrect, directed, for instance, at President Obama and former First Lady Michelle Obama, as well as the Clinton political dynasty.

LifeSiteNews asked Tieso about his tweets. “My tweets on my personal, private, and unaffiliated Twitter account represent my personal perspective as an American entitled to those personal, albeit conservative views,” he emphasized.

After the letter by a student from a different university was sent to the Catholic University of America, the school asked Tieso to “drop my account so they could tell the press it was gone, and then terminated me anyway.”

“Interestingly, the e-mail from the Dean terminating me spoke to items in my Twitter account not supposedly mentioned in the letter; instead, they went back to read the account, my personal account, and added to their ‘charges,’” Tieso clarified.

“I was terminated within 5 days and never given the opportunity to deal with the issue,” he added. “My appeal to the Provost was only answered in part by the University Ethics Officer who refused to provide specifics in writing to which I could respond, instead demanding only telephone conversations.”

Tieso is planning to sue the Catholic University of America within a month. “There is no question in my mind, or that of my legal counsel, that litigation is coming,” he said.

On the question of Dr. JoAnn Regan, the new dean of the National Catholic School of Social Service, Tieso said “to discount her as a candidate out of hand is, in my view, unjust, as was my firing without opportunity to have my case adjudicated internally.” At the same time, there “is a limit to academic freedom.”

Students should know that issues like homosexuality and gender ideology exist, “and the Church’s position on them is, or should be, part of their education. Should the personal position of the professor be encouraged; there the answer is NO.”

In 2018, another professor at Catholic University of America was suspended over questioning the allegations of sexual assault directed at Brett Kavanaugh, who at the time had been nominated as a Supreme Court Justice by President Donald Trump, and was undergoing the Senate confirmation process.

William Rainford was the dean of the National Catholic School of Social Service, which is now headed by JoAnn Regan. Using a Twitter handle (@NCSSSDean) indicating he was making his comments as a representative of the university, he wrote: “Swetnick is 55 y/o. Kavanaugh is 52 y/o. Since when do senior girls hang with freshmen boys? If it happened when Kavanaugh was a senior, Swetnick was an adult drinking with&by her admission, having sex with underage boys. In another universe, he would be victim & she the perp!”

Rainford also questioned allegations of sexual assault by Christine Blasey Ford. “Riddle me this. Why would the accuser of Kavanaugh take a polygraph, paid for by someone else and administered by private investigator in early August, if she wanted to remain anonymous and had no intention of reporting the alleged assault?”

Several weeks later, Rainford resigned as dean. He is still listed as an associate professor at the National Catholic School of Social Service.