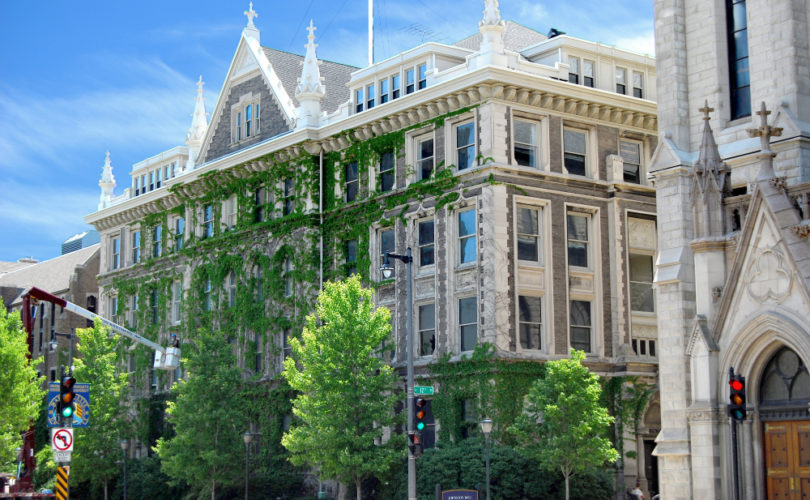 At Roman Catholic-affiliated Marquette University, expressing belief in the teachings of the Church could eventually get you fired.

That’s the conclusion many are drawing from a recent training seminar given to Marquette University employees that told workers to report their colleagues for harassment if they spoke openly against same-sex “marriage.”

Under federal law and Marquette University policy, all employees, faculty, staff, and student employees must submit to anti-harassment and diversity training as a condition of employment.  The programming in the anti-harassment portion of the course includes a comic strip-style story featuring a fictional employee named “Harassed Hans.” Hans is upset with his colleagues, Becky and Maria, who “have been talking about their opposition to same-sex marriage.”

“Their co-worker Hans is offended, but he struggles with whether to report the situation,” the strip says.  Eventually, Hans reports Becky and Maria to HR.

“I can’t believe he’s trying to trample on my free speech rights,” she says.

But according to the presentation, Becky’s free speech rights disappeared the moment she entered the workplace.

“Although employees have free speech rights under the United States Constitution, in academic and other workplaces those rights are limited when they infringe upon another person’s right to work in an environment free of unlawful harassment,” the presentation states.

“Even though Becky and Maria were only expressing their opinions and didn't mean to offend, they could still be engaging in harassment,” the presentation continues. “The complainant does not need to be involved in the conversation to be offended. Hans’ sexual orientation is also irrelevant; he does not need to be gay to be offended by his coworkers’ discussion of same-sex marriage.”

The presentation tells workers: “Hans is right to report Maria and Becky’s conversation.”

While the Roman Catholic Church teaches that marriage is a sacred union between one man and one woman for the purpose of creating new life, recent U.S. court decisions have redefined the institution in dozens of states to mean a legally sanctioned partnership between two people of any sex.

In light of these sweeping changes, Marquette, like many other employers, looked to the federal government and human resources experts to ensure their workplace policies kept up with the shifting legal landscape.  They hired Austin-based Workplace Answers, an HR training company that has reportedly been retained by several other Catholic institutions.  The company boasts on its website about its “customizable” course offerings, the content of which can be altered “to reflect your unique environment.” Writes the company: “Our courses are custom-tailored to your industry and employee base.”

Asked whether the content of the anti-harassment course reflects the position of Marquette University when it comes to speech related to same-sex “marriage,” Dorrington told CNA that the “hypothetical scenarios” contained in the programming are “teaching tools [that] do not necessarily equate to university policy.”

“They are simply tools to raise awareness of various forms of harassment that could arise,” he said.  Specific accusations of harassment “would be reviewed on an individual basis,” said Dorrington.

But the university’s approach to speech that could be called either “Catholic” or “harassment” – depending on who is doing the listening – is already facing scrutiny after a student accused his instructor of squelching a discussion over same-sex “marriage” in her ethics class, saying that there was no use discussing it because “everybody agrees” it should be legal.  When the student came to her after class to object, and told her that he opposed same-sex “marriage,” she said she would not tolerate “homophobic” remarks in her classroom and advised him to drop the class, even though it is required for graduation.

In relation to that case, Dorrington said in a statement that the university is “reviewing both a concern raised by a student and a concern raised by a faculty member. We are taking appropriate steps to make sure that everyone involved is heard and treated fairly. In compliance with state and federal privacy laws, we will not publicly share the results of the reviews.”