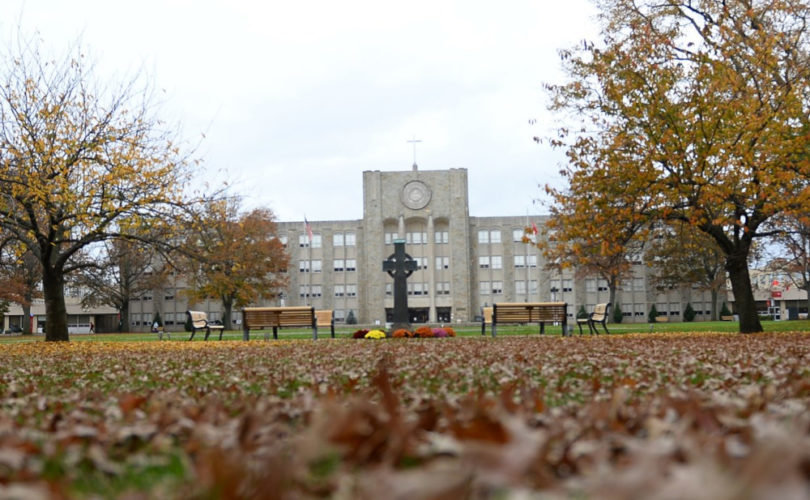 NEW YORK, April 30, 2021 (LifeSiteNews) — The Dominican priest and president of the Catholic St. John’s University in New York City has committed the school to furthering and promoting LGBT ideology, stating that more must be done to include LGBT individuals, and saying the university policies must reflect this goal.

Fr. Brian J. Shanley, O.P., issued an internal memo — obtained by LifeSiteNews — in which he decried the recent findings of a report by “The Transgender Training Institute” (TTTI), which stated that “it is not currently possible to say that SJU is a community that is open and welcoming for LGBTQ+ students, staff and faculty.”

The report called on the university to take a “stronger, more vocal stance in support of LGBTQ+ people through both words and aligned actions.”

Writing internally to the university in response to the report, Fr. Shanley wrote that he was “disheartened to learn about the many negative experiences of our LGBTQ+ students, employees, and alumni: a lack of support, neglect, ignorance, bias, and prejudice.”

“It is clear, both from the climate survey and my own observations, that much work needs to be done to transform St. John’s into a place that is equitable and inclusive for LGBTQ+ people.”

“As the new president of St. John’s, I want everyone to know that I embrace the LGBTQ+ members of our community and that I am committed to leadership that will help to create a climate that realizes our mission to love and respect every individual as made in the image and likeness of God.”

Shanley added that LGBT individuals had “enriched our community in many ways,” mentioning that they had made “contributions” to the university for “generations,” doing so “nearly always without proper recognition and at great personal risk. We must all work together to create a campus that is more inclusive, respectful, affirming, and loving.”

The radical transformation of the campus which Fr. Shanley looks to implement would be expressed in new “practices, policies, and norms.”

Shanley proudly referenced how St. John’s was the first university to commit to a statement from a pro-homosexual advocacy group, which affirmed LGBT youth by telling them that “God is on your side.” Yet despite this, Shanley stated that the university needed to improve in its commitment to LGBT ideology, referencing a “culture of silence” when it came to “affirmation of LGBTQ+ community members.”

The TTTI also mentioned such a culture of silence: “[S]ilence translates into a campus where LGBTQ+ people are welcomed as members of the SJU community, but not necessarily embraced as LGBTQ+ people.” Shanley wrote that “it is a culture I am actively working to disrupt.”

The Catholic Church teaches that homosexual acts are one of the four sins that cry to heaven for justice. The Catechism of the Catholic Church states that “basing itself on Sacred Scripture, which presents homosexual acts as acts of grave depravity, tradition has always declared that ‘homosexual acts are intrinsically disordered’. They are contrary to the natural law. They close the sexual act to the gift of life. They do not proceed from a genuine affective and sexual complementarity. Under no circumstances can they be approved.” (CCC 2357)

Fr. Shanley, appointed president of the university in late 2020, revealed himself to be aware of the Catholic teaching regarding homosexuality, commenting that “some of the tenets of Catholic moral teaching create challenges for making LGBTQ+ people feel fully included and embraced.”

He described this Catholic doctrine as “a difficult and painful reality,” which was a detriment to “greater understanding and connection in our community.”

The TTTI made a number of recommendations for the university, in order to become more in line with LGBT ideology. Among them were proposals for LGBT-specific Masses; pro-LGBT events, such as pride days; prioritizing “inviting LGBTQ+ speakers to campus”; increasing the number of “all gender bathrooms.”

The TTTI also recommended to use pronouns which align with the sex of which a student claims to be a member; provide “HR benefits” for “married” same-sex couples, including medical transitioning; begin a mandatory first-year seminar which would provide “LGBTQ+101 content, as well as content that is anti-racist, anti-ableist.”

Not only this, but the TTTI asked the university to perform actions which would seem to set the university in direct conflict with Catholic teaching on some matters.

Some such instances were the recommendations to “voice condemnation or solidarity when public news events of LGBTQ+ people intersect with the Catholic Church,” and “send messages to the university keeping the community abreast of the issue and offer support in affirming identities, highlight the mission of the university in affirming human dignity of LGBTQ+ peoples, and stress the message of inclusion embodied on campus.”

This latter suggestion was made in specific reference to the recent declaration by the Congregation for the Doctrine of the Faith, reiterating the Church’s teaching which bans blessings for same-sex couples.

In the internal memo, Fr. Shanley wrote that he would be asking the “senior management team, other campus leaders, and the Strategic Planning Committee to give careful attention to the Transgender Training Institute’s Climate Assessment.”

The various recommendations, as well as additional ones stemming from “ongoing community feedback,” would be “taken seriously,” he stated. “I am confident that our strategic plan will be responsive to the concerns highlighted in the climate survey.”

LifeSiteNews contacted the university about the matter, inquiring whether Fr. Shanley was concerned that his promotion of LGBT ideology placed him in opposition to the Church’s teaching on the matter, and if his actions could encourage students in a lifestyle condemned by the Church.

A spokesman for the university replied: “At St. John’s University, we embrace all members of the University community without exception in all that we do, and Fr. Shanley’s statements on the matters that you raise speak for themselves and the University.”

A constant tone for his presidency

The news comes just hours after LifeSiteNews reported on how Fr. Shanley was mandating COVID-19 injections for all on-campus students this fall. Citing the “expanded availability” of the injections, Shanley ordered that students must not only be injected, but provide proof of the event, in order to attend the university.

Some exceptions would be provided for those who could provide “proof of a documented medical condition,” or who did not have the injection “due to religious beliefs.”

St. John’s, which proclaims its Vincentian “compassion and zeal for service,” could face backlash based on violation of human rights under the new policy. Since the COVID injections have so far only received emergency use authorization, they are as yet only experimental, and forcing individuals to partake of experimental medicine is a violation of the Nuremberg Code, which came to be as a result of the atrocities seen in World War II.

However, the latest two developments at St. John’s are no surprise, as Fr. Shanley 2255

In 2016, as president of Providence College, he verbally attacked then-Professor Anthony Esolen, who had criticized what he described as the college’s surrender to the “the Totalitarian Diversity Cult.” Shanley rebuffed Esolen by saying that both he and the college “understand and value diversity in a very different sense from him.”

That same year, Shanley invited “Rhode Island’s most notorious abortionist” to take part in a political panel discussion at the college.

Indeed, two years later, Fr. Shanley made headlines for initially refusing to condemn a gay-rape cartoon in Providence College, which threatened a pro-family, pro-marriage student. Michael Smalanskas had put up a poster on the college notice board, defending the Catholic teaching about marriage, but was subsequently placed under the protection of campus police, after being threatened by fellow students, and a cartoon depicting his forcible homosexual rape was placed in his dormitory bathroom.

After nearly a month, following the intervention of the local bishop and a petition by the laity, Fr. Shanley intervened to condemn the threats made against Smalanskas.