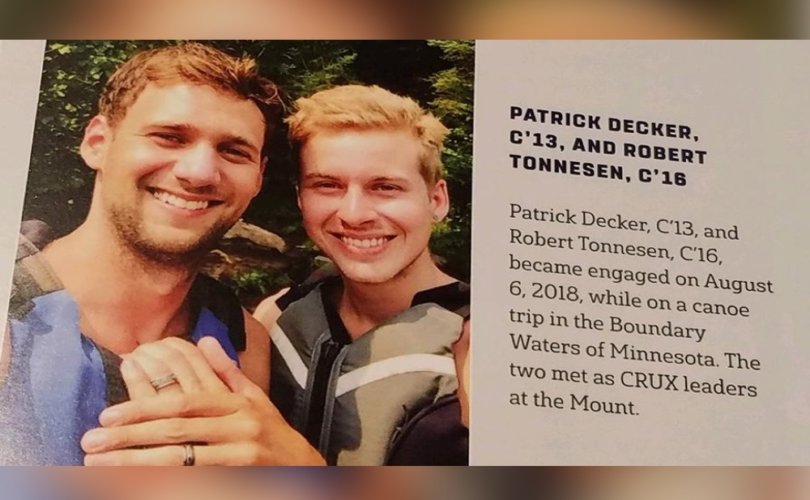 The homosexual engagement announcement in the MOUNT magazine

EMMITSBURG, Maryland, June 17, 2019, LifeSiteNews — The alumni publication of Mount St. Mary’s University, a Catholic institution in Maryland, has for the first time included an engagement announcement for a same-sex couple.

Until this spring, Mount St. Mary’s had been held in high regard for consistently upholding Catholic teaching. But there are some signs that may be changing.

In April, when the school administration announced its choice of Mark Shriver – a former Maryland politician with a 100% rating from NARAL Pro-Choice Maryland – as its 2019 commencement speaker, the Cardinal Newman Society immediately issued a statement saying it was “shocked and dismayed” that “an institution recommended in our Newman Guide for its faithful Catholic identity” had chosen Shriver. It noted “the possibility of scandal” created by honoring pro-abortion politicians.

That shock and dismay was reawakened over the weekend for some graduates of the school with the arrival of the MOUNT magazine in their mailboxes. A number of alumni reached out to LifeSiteNews to express concern that the Catholic identity of the school may be ebbing away.

I would like to call your attention to an announcement that appeared in the most recent MOUNT magazine, celebrating the engagement of two men. It saddened me deeply to see reported, alongside announcements of births and weddings and professional accomplishments, an event celebrating a lifestyle that is counter to everything that you say the Mount stands for: In your letter at the front of the same magazine, you say the Mount “wants to educate the next generation of ethical leaders in service to God and others.”

The lifestyle of two graduates who are choosing to embrace their same-sex attraction denies their dignity as sons of God, and will never allow them to be fully who God created them to be.

Celebrating this choice is akin to celebrating someone who has chosen to embrace their alcoholism, their drug addiction, their clinical depression. This is not something to celebrate; this is a call for remediation.

There are successful ministries within the Catholic Church that help both heterosexuals and those with same-sex attraction to live chaste lives; countless Christians can tell stories of how embracing God’s will for their lives has made them whole again, allowing them to pursue their full potential as children of a loving God who created them just as they are. This is what it takes to be an “ethical leader” and yes, even a saint.

God doesn’t make mistakes, but He does give us the tools we need to “attain to the whole measure of the fullness of Christ” (Ephesians 4:13).

This is what we are all called to: Mount students, Mount professors, Mount seminarians. Please hold that standard high and stop celebrating what needs to be healed. May the Lord God bless your efforts to build a faithful, God-fearing institution of higher learning.

Stief’s letter ended with an impassioned plea to the school’s president: “I have spoken with several other Mount graduates who feel the same way I do. Please uphold the clear teachings of our holy Mother Church, Dr. Trainor!”

In a statement to LifeSiteNews, Mount St. Mary’s administration chose not to address concerns about the school’s Catholic identity, and focused instead on “engagement with the world and hospitality to all.”

The school’s Director of Public Relations and Communications, Donna Klinger, offered the following rationale for inclusion of same-sex engagements in the school’s alumni magazine:

Mount St. Mary’s University is a Catholic university where the Church and the world dialogue, giving students the knowledge and skill to ethically apply the Church’s teachings in the modern world in service to God and others. Our enduring 211-year commitment to our Catholic mission inspires engagement with the world and hospitality to all regardless of religious background. We are a diverse, inclusive community composed of individuals of many faiths and beliefs. Through its alumni magazine, the university shares the news of all alumni. We do not make judgments about the news being shared, and inclusion of an announcement does not imply the university’s endorsement. Filtering news to reject anything that does not follow Catholic teaching would deprive all alumni of learning about life’s milestones of not only people who are in same-sex relationships but also those who are divorced and entering second marriages, or those who have children out of wedlock.

LifeSiteNews reached to Archbishop William Lori of Baltimore for comment but received no reply thus far. Lori is a member of the school’s Board of Trustees who also serves as chancellor of Mount St. Mary’s Seminary, which, although a separate entity, shares the Mount St. Mary’s campus.

The Cardinal Newman Society issued the following statement: “This is yet another scandal that undermines the University’s mission to uphold and teach the Faith. The Mount’s statement unsuccessfully attempts to explain away the problem and lacks the integrity of an institution committed to the formation of its students. A Catholic university must make deliberate choices about what to publish and who will speak at commencement, and the Mount’s leadership is making very bad choices without regard for the corrosive impact on its students and alumni.”

In May, a prestigious prep school in nearby Washington, D.C. similarly came under fire from alumni for deciding to publish same-sex union announcements in its alumni magazine.