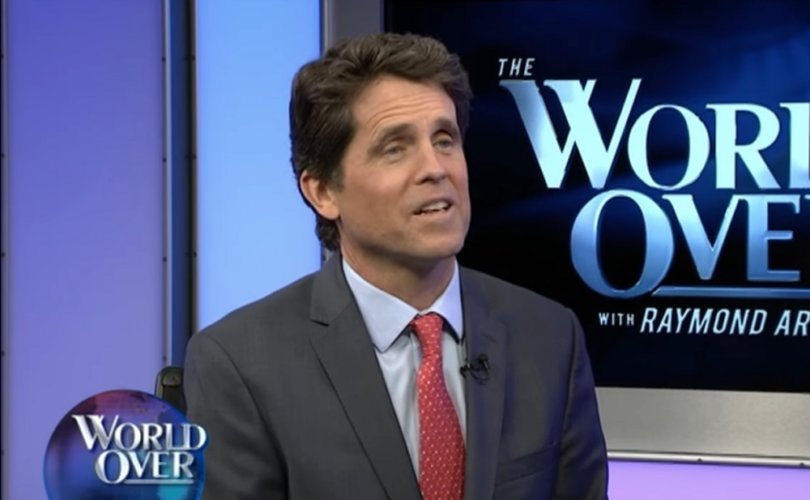 Mark Shriver in an interview with Raymond Arroyo.EWTN via YouTube

EMMITSBURG, Maryland, April 16, 2019 (LifeSiteNews) — Mount St. Mary’s University, a Catholic institution in Maryland, has announced that it has selected a noted pro-contraception, pro-abortion former politician as its 2019 commencement speaker.

Save the Children supports “clinic and community based strategies to increase access to contraception for unmarried as well as married girls and boys,” according to one of its online documents. The organization also works with the Bill and Melinda Gates Foundation, which promotes educational programs on human sexuality that stand in direct opposition to Catholic moral teaching.

From 1995 to 2003, Shriver was a member of the Maryland House of Delegates who received a 100% rating from NARAL Pro-Choice Maryland.

Upon hearing the announcement, the Cardinal Newman Society immediately issued a statement saying it is “shocked and dismayed” that “an institution recommended in our Newman Guide for its faithful Catholic identity” had chosen Shriver, and noted “the possibility of scandal.”

“We have urged that the University reconsider and rescind its invitation and stand strong in its Catholic identity, as it has done so well in recent years,” continued the Newman Society statement.

LifeSiteNews reached out to Mark Shriver last week and asked him if he is willing to go on record saying that he condemns abortion but received no response.

A group of students, concerned about the choice of Shriver to receive the commencement honors, met with Mount St. Mary’s president, Dr. Timothy Trainor, on Thursday, April 11. LifeSiteNews and other news media were not allowed to attend.

One student reached via email who asked to remain anonymous prefered not to comment on the substance of the meeting but said, “The campus is sadly divided over this issue with emotions running high,” adding that a “harmful fire that is plaguing Mary’s mountain.”

Some Mount St. Mary alumni are also concerned about the choice of Shriver.

“I find it very concerning that Mount St. Mary’s, a Catholic university, is honoring a politician who has embraced the cultural narrative that a child in the womb is a commodity that can be discarded after conception and not treasured and nurtured,” said Jim Parshall in a statement to LifeSiteNews.

“The Mount has traditionally valued its Catholic identity and prided themselves that their seminary has been called ‘the cradle of bishops,’” said Parshall. “The action of honoring Mark Shriver is a direct affront to that cradle, our children’s cradles, that Catholic identity, and the Servants of God who have walked in its grounds.”

“If the Mount does bestow this honor, I would hope that The Newman Guide to Choosing a Catholic College and the National Catholic Registers’ ‘Catholic Identity Guide’ reevaluate endorsing The Mount,” added Parshall.

“Mr. Shriver’s outright dismissal of the Church’s core teaching on the inherent dignity of the human person from conception has made him blind, while on the one hand doing good works for the needy, on the other hand undermining them at their core — a contradiction at its foundation,” said Ann Marie Walsh, a 1986 Mount St. Mary’s graduate.

“Holding up and honoring a Catholic figure who is publicly at odds with the Church’s core values on the sanctity of life sends a mixed message to students, and all of us, about the validity of those core values, and unwittingly devalues the faith, doing the opposite of what I am sure they had intended,” Walsh told LifeSiteNews.

“Will the Mount do the right thing, and hold up the Truth by instead inviting an authentic and unapologetically Catholic leader, not only for the students’ sake, but for Mr. Shriver as well, to ‘teach’ that our core Catholic values are not false and should not be ignored, but championed?” asked Walsh.

The Cardinal Newman Society notes that this is a “pivotal moment for Mount St. Mary’s” and asks:

Why would a Catholic institution ever freely and knowingly choose someone whose public actions and statements are in conflict with Catholic teaching on grave moral issues, thereby risking scandal and diminishing the character of the institution? What is Catholic education, if it chooses knowingly to confuse its students and the public on the Church’s clear moral teachings? It is not Catholic education. …

The fact is that every Catholic college today faces a strong pull from the culture to compromise Catholic identity and secularize. Only those Catholic colleges that are intentional about remaining faithful to their Catholic mission will be able to avoid the temptation of compromise and hypocrisy.

“The Catholic community and Catholic institutions should not honor those who act in defiance of our fundamental and moral principles,” according to the U.S. bishops’ 2004 document “Catholics in Political Life.” “They should not be given awards, honors or platforms, which would suggest support for their actions.”

LifeSiteNews also reached to Archbishop William Lori of Baltimore for comment but received no reply. Lori is a member of the school’s Board of Trustees who also serves as chancellor of Mount St. Mary’s Seminary, which, although a separate entity, shares the Mount St. Mary’s campus.