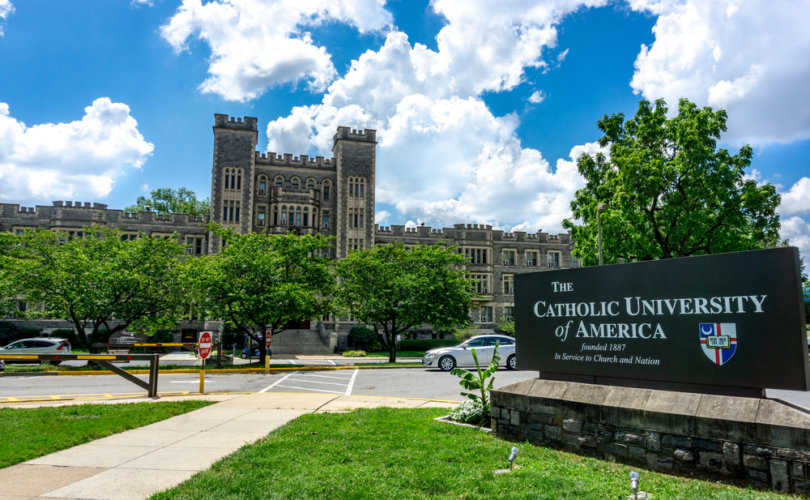 “Cardinals for Life decided to cave to liberal pressure and cancel the event,” Johnson said in a Facebook post earlier this week, extending her sympathies to “poor students” “who are taking the heat of these cafeteria ‘Catholics.’”

Johnson, who was originally invited by Cardinals for Life two years ago, confirmed that CUA College Republicans ended up hosting the event, which went forward as planned on Tuesday.

Cardinals for Life members have spoken out in recent days about the pressure campaign launched by Fr. Jude and Catholic University’s campus ministry that ultimately led to the resignation of the president of the pro-life group, according to a letter obtained by The Daily Caller.

“I am writing today to inform you that I am resigning from my position as President of Cardinals for Life at the Catholic University of America, effective immediately, because of how I was pressured, against my conscience, by the University Chaplain in his capacity as adviser to Cardinals for Life, into making a decision to postpone indefinitely an event with Abby Johnson,” the group’s leader Anna Stephens wrote to CUA President John Garvey.

In a statement on Tuesday, Garvey, who named a pro-LGBT advocate as an academic dean last fall, claimed that Fr. Jude “sought solutions that would give him more time to do the work necessary to build community.”

“It seems the new standard at Catholic University to bring a speaker is that the hosting organization must endorse everything they’ve ever said, regardless of the context,” Cardinals for Life co-service chair Catrióna Fee told The Daily Caller, highlighting “bullying from campus ministry.”

“We were going to host Abby Johnson because of her powerful testimony of conversion from working at Planned Parenthood to being one of the top pro-life voices in the nation,” she said.

A former Planned Parenthood employee of the year, Johnson resigned from the organization in 2009 after suddenly recognizing the personhood of an unborn child being killed in an ultra-sound abortion, as she has related. She entered the Catholic Church with her husband in 2012.

Johnson told LifeSiteNews that Fr. Jude’s attempt to “silence” her “has unfortunately become the norm inside of many Catholic universities today.”

“Instead of engaging in dialogue with those we disagree with, we attempt to silence their voices,” she said, condemning the chaplain for “participating in cancel culture.”

Fr. Jude responded to the incident earlier this week on Instagram, asking for “forgiveness” from university members, including those “frustrated, angry, hurt, and embarrassed by the presence of Abby Johnson.” He cited what he called Johnson’s “endorsement of racial profiling by police and her comments denigrating the black community.”

In a since-deleted video uploaded to YouTube last summer, Johnson said that she would be angry if a police officer treated her biracial son violently, but wouldn’t be angered if police were “on more high alert” around him.

“[I]f [a police officer] treats my brown son violently, more violently than my white son, that makes me angry,” Johnson said. She added that “if he’s on more high alert with my brown son than he is my white son that doesn’t make me angry, because this is smart, because of statistics.”

“When I look at the people who are urging for the cancellation [of Tuesday’s speech], their bios have their pronouns listed, rainbow flags, they are people who adore Biden, support the BLM,” Johnson said on Facebook. “I mean, if these are people who supported my work, I would say that I’m doing something wrong.”