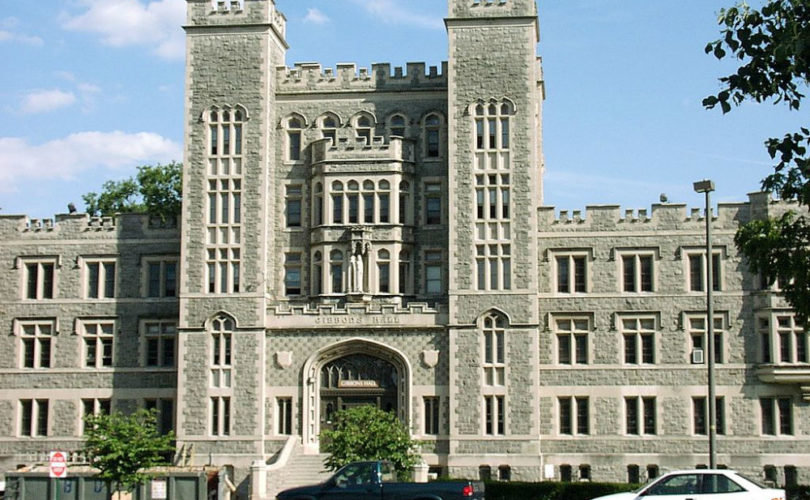 WASHINGTON, D.C. (LifeSiteNews) — Catholic University of America (CUA) has reversed course and is removing abortion coverage from its student health plans following discovery of a provision that had gone unnoticed for three years.

On November 9, The College Fix reported that its student health plans for the 2019-2020, 2020-2021, and 2021-2022 academic years, provided through Aetna, covered abortion “when the pregnancy is the result of rape or incest or if it places the woman’s life in serious danger.”

The Fix says it made multiple attempts to ask the university about the discrepancy between its health policy and its official pro-life values — it’s currently fighting the Obama-era contraception mandate in court — but received no reply until going public with the story.

“A few years ago our health insurance provider for our student health plan (Aetna) made a blanket change to their plans to add limited exceptions to the abortion exclusion — in the case of rape, incest, and if the life of the mother is in danger. Unfortunately, we failed to catch the modification,” Lozoya elaborated, as quoted in a follow-up story. “The change was not intentional on our part. Our health insurance plan for staff never included these exceptions. As a result of our direct communications with Aetna, they have removed all exceptions to the comprehensive exclusion of abortion coverage from our student health plan, and we have removed the plan from our website.

“An amended plan will be available soon, and it will be explicit that abortion is excluded from coverage,” Lozoya promised. “The Catholic University of America apologizes for the error.”

Despite the reversal, grave questions remain about CUA’s current brand of Catholicism. The pro-life student group Cardinals for Life has repeatedly been denied funds by the student government; in February, its chaplain, Fr. Jude DeAngelo, reportedly pressured the school’s Students for Life chapter into canceling a speech by pro-life activist Abby Johnson, and it named pro-LGBT figures, including Cardinal Joseph Tobin, to its search committee for a new president.

“Maybe the new motto for CUA should be Tantum in Nomine Catholica (‘Catholic in Name Only’),” former CUA administrative assistant Theresa Nixon wrote at LifeSiteNews in August 2020.

Even so, the school’s rejection of abortion coverage did more than bring the school’s policies closer to Catholic fidelity. The Fix notes that CUA’s ability to change its plans in response to public scrutiny “calls into serious question the validity of” the claims of another Catholic educational institution, the University of San Diego, that both state and federal law require it to subsidize “gender reassignment surgery” in violation of Catholic teaching.