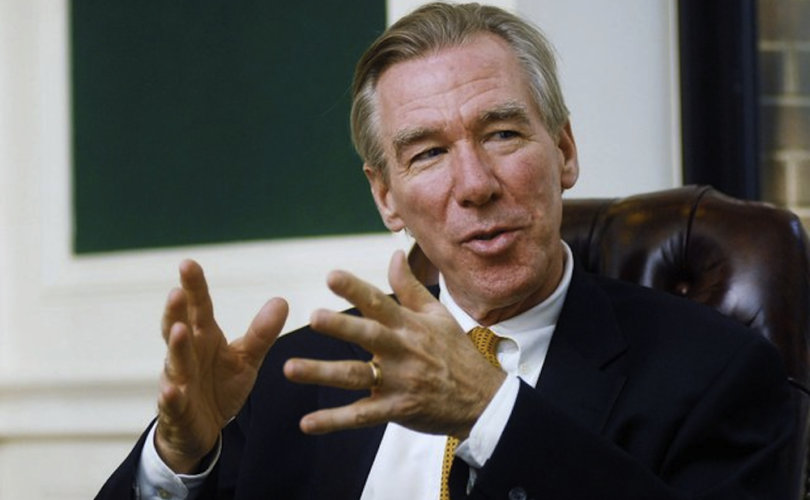 In an article for the Arlington Catholic Herald, John Garvey wrote, “I am so proud of our students. This month the student government association, the body that represents our undergraduates, passed a resolution asking the university to prohibit access through the campus network to the 200 most frequently visited pornography websites. I told them we'd be happy to.”

On April 1, CUA’s Student Government Association (SGA) passed Resolution 108 by a 13-12 vote, and it was signed by SGA president Jimmy Harrington. The motion was sponsored by student senator Gerard McNair-Lewis.

“I am signing the resolution not from purely religious or Catholic grounds, but because The Catholic University of America can and should exercise its rights to prohibit the use of pornography on the campus network,” Harrington stated.

Inspired by the endeavor, LifeSiteNews sponsored its own petition for a web filter at CUA; it attracted more than 5,500 signatures.

In President Garvey’s op-ed, he reflected on the ubiquitous and graphic nature of online pornography and on the changes the internet has brought to social lives.

“Next time you walk down the street, watch how many of your fellow pedestrians are consulting their phones,” he wrote.

“When we dine out, my wife and I see young couples seated around us looking down at Facebook rather than across the table at one another. Instead of living our own lives, we now play parts in a simulacrum that we create, touch up, preserve and revisit.”

Garvey argued also that technology has even made sexual partners redundant.

“Modern pornography lets us extend this solipsism to our sex lives,” he observed. “We don't need one another for sexual fulfillment. We can summon imaginary partners at the touch of a button.”

Interestingly, the university president compared this to another technological innovation: the birth control pill.

“The birth control pill allowed people to act on their sexual impulses without fear of pregnancy,” he wrote. “So it separated sex from children, long-term commitment and love, and made it a form of recreation. If that's all it is, any partner will do: even a virtual one.”

This has made courtship redundant, and Garvey reflected that what students have been offered instead is “sad.”

“It's sad, what we have done to ourselves, and especially to the young people whose hormones are pulling them irresistibly to find love and play a part in God's creation,” he wrote.

“It says that this is not the sort of relationship they should be looking for, and we're not going to lend our system to help them find it,” he concluded.

The Catechism of the Catholic Church states that:

“Pornography consists in removing real or simulated sexual acts from the intimacy of the partners, in order to display them deliberately to third parties. It offends against chastity because it perverts the conjugal act, the intimate giving of spouses to each other. It does grave injury to the dignity of its participants (actors, vendors, the public), since each one becomes an object of base pleasure and illicit profit for others. It immerses all who are involved in the illusion of a fantasy world. It is a grave offense. Civil authorities should prevent the production and distribution of pornographic materials (2523).”

“I don’t think it’s in the character of this university to start censoring information,” Bechtel said, adding, “For example we don’t generally impose our religion on the students that go here. We’re a relatively tolerant university.”