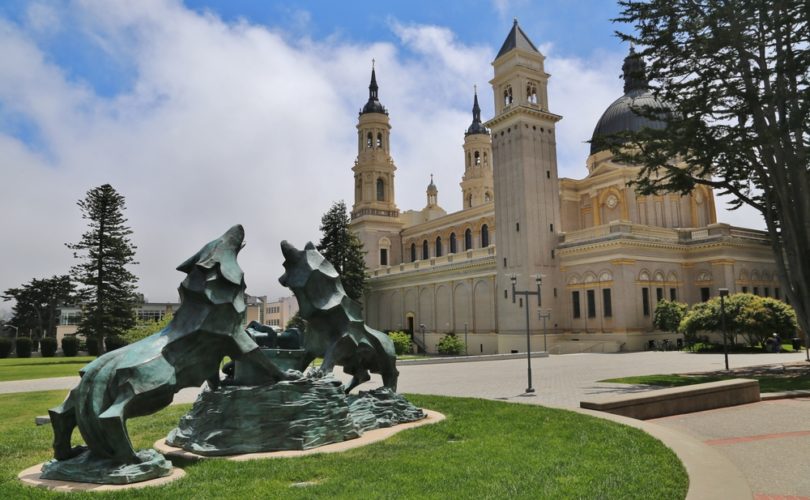 November 2, 2015 (The Cardinal Newman Society) — The editorial staff at the University of San Francisco’s official student paper, the San Francisco Foghorn, issued statements in opposition to Catholic teaching in recent months supporting assisted suicide, the right to an abortion, contraceptive use, Planned Parenthood and same-sex marriage without any public efforts from administrators to rebuke the publication and protect the University's Catholic identity posted either online or in response to questions from The Cardinal Newman Society.

“All of our staff members believe that assisted suicide should be legalized for terminally ill people who truly believe that it is the only option they have left,” an October 15 Foghorn staff editorial stated, celebrating the legalization of assisted suicide in California by Governor Jerry Brown. The students added that “terminally ill citizens’ should have right to die [sic] on their own terms and the right to exert control in their lives one last time.”

The Cardinal Newman Society made several efforts to contact University of San Francisco officials to respond to the University-sponsored paper promoting positions in opposition to Catholic teaching, but no response was received. The Newman Society also searched the University's website for official statements countering the Foghorn and defending Catholic teaching, but found no such statements.

The Newman Society reached out the Foghorn staff with questions about taking editorial positions in opposition to Catholic teaching, and the potential harm of those positions to the University’s Catholic identity. The Foghorn’s editor-in-chief, Nureen Khadr, only responded by saying:

As stated in our masthead: “The thoughts and opinions expressed herein are those of the individual writers and do not necessarily reflect those of the Foghorn staff, the administration, the faculty, staff or the students of the University of San Francisco. Contents of each issue are the sole responsibilities of the editors…Staff editorials are written by the Foghorn editorial staff and represent a group consensus.”

When pressed further to answer the Newman Society’s questions with more specifics, Ms. Khadr did not respond.

“Catholic colleges and universities are responsible for activities occurring on or off campus which reflect the character of the institution,” said Bob Laird, vice president for program development and director of higher education programs at The Cardinal Newman Society.

“When such radical anti-Catholic positions are not only reported, but also endorsed and encouraged by publications that are sponsored by and receive funding through Catholic universities, administrators have a responsibility, at the very least, to make public statements in response that affirm faithful Catholic teaching,” he said.

Three days before the Foghorn editorial endorsing assisted suicide, the Catholic bishops of California issued a joint statement on October 12 saying Gov. Brown's decision puts the people of California at risk, and “makes a travesty of compassion for the sick, care of the poor and protection of our most vulnerable residents.”

“A greater understanding and appreciation of our Catholic teaching can bring the peace and dignity we all seek as death approaches,” the bishops said. “The Catholic Church wishes to offer all Californians the beauty of our teaching on the end of life, the effectiveness of our compassionate care and the sound prudence of a responsible exercise of patient autonomy.”

And Cardinal Seán O'Malley of Boston, Mass., issued a statement on October 6 on behalf of the U.S. Conference of Catholic Bishops (USCCB) as chairman of the Committee on Pro-Life Activities calling the legalization of assisted suicide in California “a great tragedy for human life.”

“A government that legalizes assisted suicide sends the terrible message Pope Francis has so eloquently warned us against, that there is such a thing as disposable people,” he said.

In the same post supporting assisted suicide, the Foghorn expressed support for the legalization of gay marriage: “For most issues, having government involvement regarding societal improvement and personal health is appropriate, even necessary, for a healthy society. Examples include the recent [Supreme Court of the United States] ruling on gay marriage and the implementation of universal healthcare.”

Archbishop Joseph E. Kurtz of Louisville, Ky., speaking as president of the USCCB, called the Supreme Court’s decision legalizing same-sex marriage “a tragic error that harms the common good and most vulnerable among us.” He called on “all people of good will” to proclaim the “goodness, truth, and beauty of marriage as rightly understood for millennia.”

As the Newman Society previously reported, the official University of San Francisco Twitter account sent out messages celebrating the Supreme Court decision. One post was subsequently deleted, with University President Father Paul Fitzgerald, S.J., telling the Newman Society that the tweet was inappropriate and was posted in error by an inexperienced staff member. But one of the tweets is still published on the University’s Twitter feed, reading: “Perfect timing for #SFPride! Supreme Court rules same-sex marriages are legal in ALL states! https://ow.ly/OQwUy.”

In a September 24 editorial titled “Don't Defund Planned Parenthood,” the student-staff of the Foghorn defended America's largest abortion business for selling aborted baby parts, promoted a right to abortion as an essential health care service and expressed clear support for the use of contraception.

The month prior, Cardinal O'Malley penned a letter from the USCCB to members of the U.S. Senate asking that they withhold federal funds from the Planned Parenthood Federation of America and its affiliates.

“It has long been troubling to many Americans that the nation’s largest abortion network, performing over a third of all abortions, receives over half a billion taxpayer dollars a year. This concern has rightly grown in recent years,” he wrote. “The most recent revelations about Planned Parenthood’s willingness to traffic in fetal tissue from abortions, and to alter abortion methods not for any reason related to women’s health but to obtain more ‘intact’ organs, is the latest demonstration of a callousness toward women and their unborn children that is shocking to many Americans.”

In 2007, the Newman Society reported that the University featured on its website home page “a festival that includes at least two films that promote abortion and same sex marriage, and a report by four USF nursing students that includes recommendations for contraceptive use.”

None of the editorials in question by the Foghorn mention Catholic teaching, nor any relevant statements made by bishops on the issues discussed.

“Why call yourself a Catholic institution if you are not willing to defend the brand?” he said.