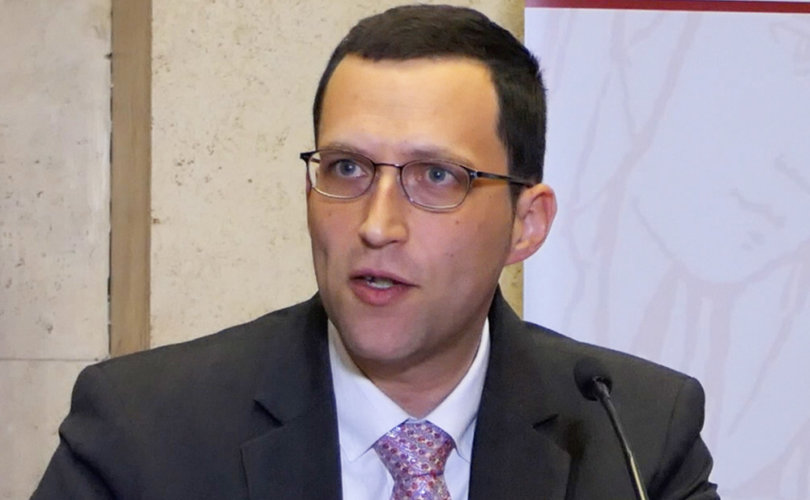 April 4, 2017 (LifeSiteNews) – Supporters have launched a petition backing a suspended professor at Belgium’s largest Catholic university for statements he made against abortion in material given to students.

Stéphane Mercier, a lecturer in philosophy at the Catholic University of Louvain (UCL), expressed the Catholic Church’s official position on abortion, the petition says, and renouncing him is “a renunciation of Christian witness in the world.”

Mercier distributed the paper to his students during a recent lecture. He challenged the concept of a “right to choose” and referenced abortion as murder in the paper.

“The murder of an innocent person capable of defending himself is revolting,” Mercier wrote in the paper, “but to attack someone who does not have the strength or the resources to defend himself is even more dreadful.”

Mercier told the Catholic Herald that he simply asked students to “reflect on the arguments by themselves. I said repeatedly that no one should feel forced to agree with me.”

He said he was only encouraging the students to consider the issues.

“I did my job,” Mercier said, “and I’m now under a disciplinary procedure which really doesn’t make any sense to me.”

Mercier is suspended from UCL until further notice while the university investigates him.

According to the university website, “UCL authorities decided to initiate disciplinary proceedings against him.”

UCL leadership supported a woman’s so-called right to choose in its statement about the suspension. In Belgium, abortion is legal.

“The UCL recalls that, in the spirit of the Act decriminalizing abortion voted in 1990, it respects the autonomy of women to make this choice, in the circumstances specified by the legislator,” it stated.

A feminist group, Synergie Wallonie, had complained to university officials about Mercier’s material.

An earlier statement from the Catholic institution said: “Whatever the outcome of the inquiry, the right to abortion is enshrined in Belgian law and the note that was brought to the attention of UCL is at odds with the values upheld by the university. Conveying standpoints that contradict these values in the framework of a teaching course is unacceptable.”

Mercier noted that Catholic bishops serve on the university’s board.

“So how can another delegate from the university say that my pro-life stand is at odds with the values of the university?” he asked. “It doesn’t make any sense.”

“I asked what their ‘values’ could be if they don’t include the dignity of human beings,” Mercier stated, “but we’re still waiting for the answer.”

It states that “to honor its Catholic title, the CUL must respect the criteria laid down by Pope John Paul the Second in his Apostolic Constitution on Universities Ex Corde Ecclesiae.”

The petition then quotes principles of St. John Paul II’s document pertaining to Catholic universities maintaining education tied to the Supreme Truth of God, remaining faithful to the Christian message as it is presented by the Church, and being witnesses and educators of a genuine Christian life.

“It is precisely this vocation of a Catholic university that Professor Stéphane Mercier has endeavored to respect in his course,” the petition states, “and it is as a result of this fidelity that he is today thrown into personal and professional turmoil, with the disgraceful connivance of his own employer, the Catholic University of Louvain.”

“In disavowing Prof. Mercier, the CUL would disavow itself,” the petition states, “and would merit the stern warning of Our Lord to the Apostles: ‘You are the salt of the earth; But if salt loses its saltiness, how can it be made salty again? It is no longer good for anything except to be thrown out and trampled underfoot.’” (Mt 5:13)