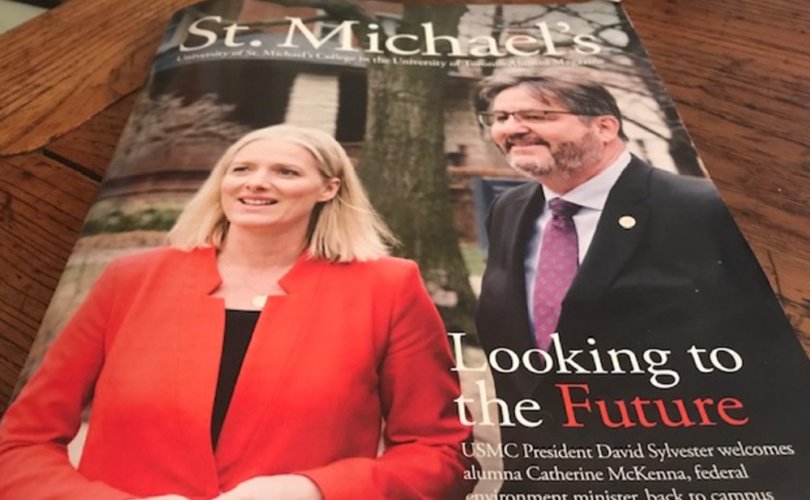 TORONTO, Ontario, Canada, September 6, 2019 (LifeSiteNews) ― A pro-abortion politician is the cover girl on the most recent issue of a Canadian Catholic university’s alumni magazine.

Catherine McKenna, Justin Trudeau’s Minister of Environment and Climate Change, was the subject of the lead story for the University of St. Michael’s College’s (USMC) “St Michael’s” magazine. McKenna is herself a USMC alumna, having graduated from the University of Toronto-affiliated institution in 1994. Wearing a jacket coloured Liberal Party red, she posed for the cover photograph with USMC President David Sylvester.

The article about McKenna, 48, and her April 2019 visit to St. Michael’s College was titled “Living Your Passion.” It described in glowing terms McKenna’s activities both at USMC and afterward. McKenna studied at the London School of Economics and then took a law degree at McGill University. She wrote the New York State Bar Exam and worked for the UN in East Timor. In 2015 she was elected to Canada’s House of Commons.

One photo of McKenna in the feature envisions her sprouting St Michael’s angel wings.

LifeSiteNews reached out to a spokesman for USMC but did not receive a response.

A former St. Michael’s President believes that McKenna was a “disappointing choice.”

“McKenna’s voice is one of the loudest in the Liberal chorus promoting abortion at home and abroad,” former USMC President David Mulroney told LifeSiteNews via email.

“Sadly, the University is displaying that unhealthy propensity at “progressive” Catholic institutions to crave secular authority, whatever the damage to Mission and Identity,” he continued.

“I would have felt better—although not entirely happy—if the University had encouraged a debate with the minister, challenging her to justify her current views in the context of Catholic teaching, something she must, at some point have encountered in the course of her Catholic higher education.”

Early last May McKenna denounced Conservative MP Ted Falk for saying that abortion is not a right.

“The Supreme Court upheld this right more than 30 years ago today,” she said in the House of Commons. “These comments serve to take women’s rights backwards.” McKenna demanded that the Leader of the Opposition denounce Falk’s comments and “clearly voice his support right now for a woman’s right to choose.”

In the 1988 Morgentaler decision, however, the Supreme Court of Canada threw out the 1969 abortion law on the basis that it was “unconstitutional.” This created a legal vacuum in which, to this day, no abortion law exists in Canada and there exists no “right” to abortion.

The Canadian MP also backed the repeal of the pro-life Eighth Amendment from Ireland’s Constitution and was in Ireland during the Referendum.

In a Tweet criticizing both pro-life laws and St. Michael’s College in the 1990s, McKenna wrote, “As evidence shows, making [sic] abortion illegal in Ireland didn't stop Irish women from having abortions, it just made it unsafe & criminalized women. Just like removing condoms from frosh kits in my day didn't stop university students from having sex, just made it less safe.”

Mulroney told LifeSiteNews that he had fallen out with McKenna over her support for abortion in Ireland.

“I myself wrote a friendly note to McKenna when I first arrived as President and her government was new,” he wrote by email.

“But I pulled back when her government’s true colours became clear. We had a terse Twitter exchange when I complained, as a former diplomat and a Catholic, about a photo of her high-fiving our Ambassador to Ireland after the Irish abortion Referendum,” he continued.

“I said that the photo was offensive to me as an Irish Catholic, as a Canadian and as a diplomat.”

In her visit to USMC students, McKenna mentioned that climate change particularly hurts the poor. Mulroney, however, thinks there is an even weaker group of people that environmentalists should consider.

“The failure of Catholic universities to serve as lights in the darkness, defending an enlightened and truly Christian humanism, is one of the tragedies of our time. And doesn’t concern for the environment include concern for the most defenceless among us?”