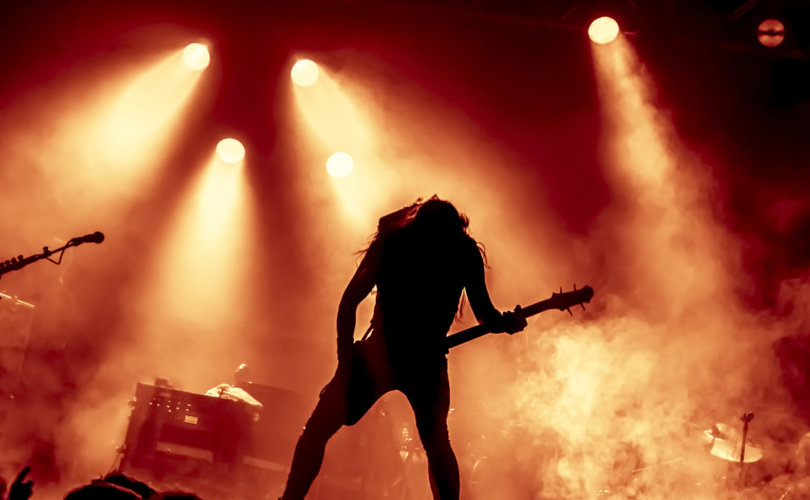 An investigation by the Lepanto Institute found that the radio station, WSOU, “is broadcasting bands and songs that are blasphemous, openly satanic, promote sacrilege, promote the murder and mutilation of women and children and the slaughter of Christians.” the Lepanto Institute documented in detail when certain songs were actually played by WSOU.

The lyrics of the song “Hammer Smashed Face,” for instance, which was aired on the radio station, are about brutally beating another person to death:

Eyes bulging from their sockets
With every swing of my mallet
I smash your f*****g head in, until brains seep in
through the cracks, blood does leak
distorted beauty, catastrophe
Steaming slop, splattered all over me

The band responsible for that song is called “Cannibal Corpse,” and the album cover shows “two mutilated and desiccated corpses” engaging in oral sexual stimulation. “The image is too foul to post – even as a censored image – here on this website,” the Lepanto Institute commented.

A band called “Lamb of God,” the Lepanto Institute wrote, produced the song “Blacken the Cursed Sun,” which “definitively denies and rejects God’s promise of salvation and the forgiveness of sins for those who repent and eternal damnation for those who refuse.”

The song “Blood Eagle” by Periphery “is about an ancient Nordic torture method so horrific that many historians don’t believe it was ever actually practiced. The Blood Eagle form of execution involved slicing open the back of the victim, separating the rib cage from the spinal column, and pulling the lungs out through the back in such a way as to look like ‘wings.’”

WSOU was founded in 1948. “Since 1986, WSOU has programmed a hard rock format and the station has developed a national reputation as an industry leader in breaking new bands,” the radio station writes on its website.

Cardinal Joseph W. Tobin, who supports homosexuality and gender ideology, is ultimately responsible for Seton Hall University. “At Seton Hall, the Archbishop of Newark serves as the Chair of the Board of Trustees and as the President of the Board of Regents – two boards entrusted with guiding the University in both its mission and its direction.”

WSOU’s mission statement claims that the radio station wants “to advance the broadest educational goals of Seton Hall University through the operation of a full-service, professionally managed, student-run radio station. WSOU is committed to strengthening Seton Hall’s Catholic and academic identity, developing a culture of engagement and service, and meeting the experiential educational and cultural needs of the campus and the community at large.”

It is unclear how playing songs like “Blacken the Cursed Sun” or “Hammer Smashed Face” advances the educational goals of a Catholic university.

In 1988 and 2001, attempts were made “to stop WSOU from broadcasting satanic music,” the Lepanto Institute wrote.

“In 1988, Seton Hall banned around 300 albums after a teenager who was a regular listener to WSOU committed suicide with a tape recording of Ozzy Osbourne’s ‘Suicide Solution’ in his pocket.”

Just over a decade later, “Seton Hall ordered the station to abandon its format of heavy metal and hard rock for one which better reflects the ‘values of the university.’” That order appears to have been later disregarded.

Complaints by faithful Catholics to Seton Hall University after the Lepanto Institute released its most recent investigation have been met only with generic replies.

“WSOU educates and entertains through music, news, sports, and public affairs; provides a hands-on learning experience for students; promotes a diverse and collaborative working environment; and encourages students and listeners to pursue a quest for lifelong learning sustained by Catholic values,” one email stated.

Michael Hichborn, president of the Lepanto Institute, said, “Seton Hall’s response puts on full display for everyone to see that the university has no standards and no regard for the Catholic faith. Perhaps the most troubling aspect of the whole situation is that WSOU admits that its demographic includes boys as young as 12! Given the Archdiocese of Newark’s history regarding the sexual abuse of boys this age, perhaps it should take a more serious look at the problem!”

Hichborn told LifeSiteNews that the “limp-wristed attempts to curtail the blatantly satanic broadcasts of WSOU” going back to 1988 demonstrate “the Archdiocese’s and university’s abject disregard for the grave danger to souls.”

“Would the university or archdiocese be so mealy-mouthed and weak if the broadcasts were racist or anti-immigration?” he asked.

Hichborn suggested that given the archdiocese’s and the university’s refusal to fix the problem, faithful Catholics should “file formal complaints with the papal nuncio in Washington, D.C. This radio station poses a clear and present danger to the faith and the faithful, and the Cardinal Archbishop of Newark is refusing to do anything about it.”