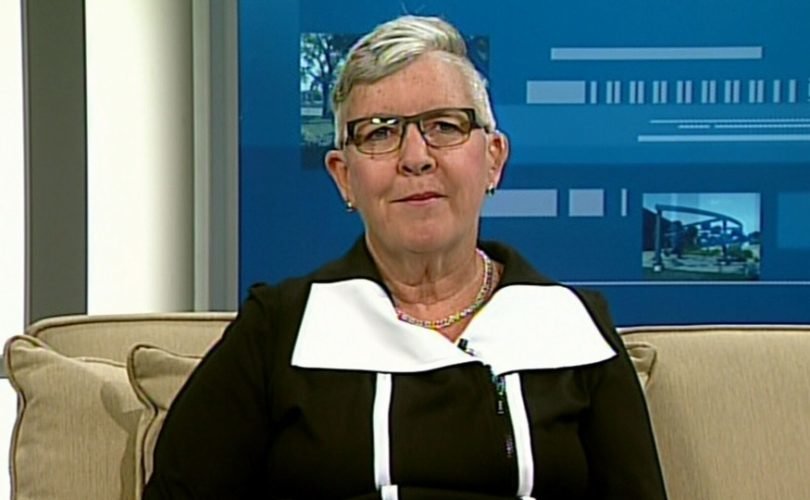 KITCHENER, June 29, 2015 (LifeSiteNews) — A Catholic vice-principal in Ontario who declared she was ‘gay’ days before retirement, while admitting to being in a lesbian partnership, says that she used her position of influence for 28 years in a Catholic school board to advance the LGBTQ cause.

“I’ve been doing the work for support for LGBTQ people for a long time, for actually the 28 years I’ve been in the board,” Joan Grundy, retiring vice-principal at St. Mary's Catholic High School in Kitchener, told CTV News.

Grundy admitted to CBC News that she had been in a lesbian relationship for about a decade during this time but had presented herself as a faithful Catholic so she could maintain her job with its position of influence.

Grundy, who has a Master's degree in theological studies with a concentration in counseling, has penned an account of her explicit rejection of the Catholic teaching on same-sex attraction in a book released this month titled “A Deepening Life”.

“'A Deepening Life' is the story of one woman’s journey away from the tenets of her Catholic upbringing towards a deeper and highly personal religious hybrid that meets her curiosity and spiritual needs as both an intellectual and an educator,” wrote one reviewer of the book at Streamfeed.

Grundy, 54, told The Spec of her struggle of leading the “double life” of appearing to be a faithful Catholic while being a practicing lesbian, a struggle that she said she was willing to subject herself to so she could continue influencing the Catholic board.

“I went into teaching to make a difference in kids' lives and to turn my back on them didn't feel right,” she said.

Grundy said when she was younger, she entertained the idea of teaching at the public board so she could be open about her sexual inclination, a thought she ultimately dismissed because she did not want to leave her work of pushing the LGBTQ cause in her Catholic school.

A workshop given by Grundy at the 2014 Ontario College of Teachers conference describes how the vice-principal used her position to advocate for LGBTQ rights and privileges in her Catholic school.

“For over twenty years [Joan Grundy] has advocated for LGBTQ students both within and outside of her board. Working alongside staff in her high school, she helped establish one of the first groups (PRISM – Pride and Respect for Individuals of a Sexual Minority) in the province to explicitly address the needs of LGBTQ students in a Catholic school context. Joan has presented workshops on the topic of supports for LGBTQ students at many provincial conferences. She is passionate and committed to helping school communities build cultures of kindness and care where all students feel welcome and are celebrated,” reads the workshop description.

Grundy said she hopes her story will help “pave the way for other educators” in her position.

In a 2004 address to United States bishops, Saint John Paul II highlighted the importance of Catholic institutions being “genuinely Catholic.”

“It is of utmost importance, therefore, that the Church's institutions be genuinely Catholic: Catholic in their self-understanding and Catholic in their identity. All those who share in the apostolates of such institutions, including those who are not of the faith, should show a sincere and respectful appreciation of that mission which is their inspiration and ultimate raison d’être,” he said.

The Catechism of the Catholic Church teaches “respect, compassion and sensitivity” for persons who have a “deep-seated” homosexual tendency while also teaching, at the same time, that homosexual acts are “intrinsically disordered” since they “close the sexual act to the gift of life.” The Church calls the homosexual “inclination” itself “objectively disordered” since it is a departure from God’s plan for human sexuality.

Matt Wojciechowski, spokesperson for Campaign Life Coalition, called Grundy’s work to advance a position at extreme odds with Catholic teaching in a Catholic institution a “scandal.”

“This Catholic vice-principal’s promotion of the homosexual lifestyle is in direct contradiction to Catholic doctrine, and represents a scandal to the faith of children, students and Catholic teachers in the community,” he said.

“The Catechism of the Catholic Church is very clear that scandal, especially to children, is very grave.”