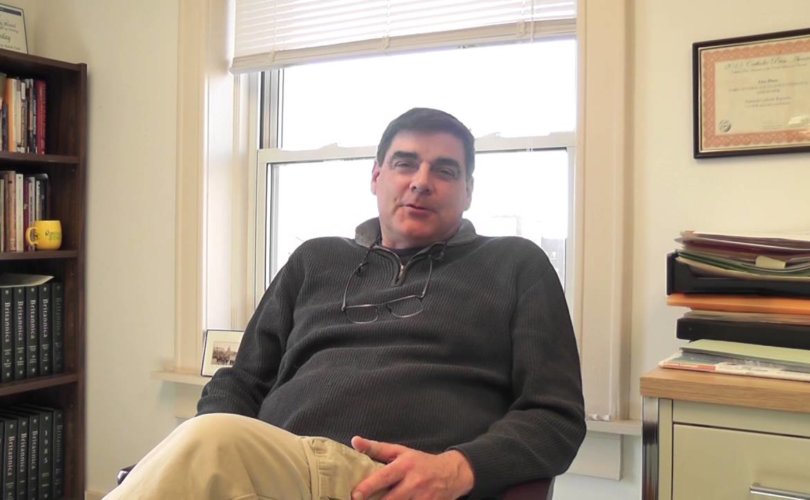 June 27, 2017 (LifeSiteNews) – A National Catholic Reporter writer argued that Bishop Thomas Paprocki should be sacked and denied a Catholic funeral because of new guidelines he released that stipulate Catholic funerals are not for unrepentant people in same-sex “marriages.”

Michael Sean Winters called the decree “unhinged” and argued that it's in conflict with Pope's document on marriage, Amoris Laetitia. Winters also wrote that if he knew he'd die in six months, he would enter into a same-sex “marriage” with his former roommate because it would make things easier on his dog.

Winters began his article by stating that Paprocki should be “sacked.”

“The decree is so completely at odds with the direction Pope Francis is trying to take the church, so excessive in its perception of the cultural significance of gay marriage, and so unlike the example of Jesus presented in the Gospels, it warrants the extreme sanction of removal from office proposed in the motu proprio, Come una madre amorevole,” he wrote.

Pope Francis issued the moto proprio (decree of his own accord) to which Winters referred. It updated the Church's policy for removing bishops negligent of clerical sex abuse.

“A Catholic funeral is as much about the bereaved family as it is about the deceased,” Winters wrote. “It is morally obscene to suggest that a grieving family, whose thoughts about the same-sex marriage may not even be known, but who have experienced a loss, should be made to endure yet more pain because Bishop Paprocki wants to make a point in the culture wars.”

Winters quoted Amoris Laetitia #304, which says: “It is reductive simply to consider whether or not an individual's actions correspond to a general law or rule, because that is not enough to discern and ensure full fidelity to God in the concrete life of a human being.”

“It is hard — no it is impossible — not to see how Paprocki's decree is a perfect example of the kind of reduction Pope Francis warns against,” he wrote. “Bishop Paprocki does not claim to know anything about these people in same-sex marriages except that one fact that they are in same-sex marriages — and that is enough.”

Paprocki, who has a background in canon law and theology, explained throughout his document to priests and diocesan staff why he was implementing such a policy. He cited canon law a number of times.

“Given the objectively immoral nature of the relationship created by same-sex marriages, persons in such unions should not present themselves for Holy Communion, nor should they be admitted to Holy Communion,” Paprocki wrote.

Canon 915 says that those “obstinately persevering in manifest grave sin are not to be admitted to Holy Communion.”

Canon 916 instructs Catholics conscious of grave sin not to “receive the body of the Lord without previous sacramental confession.”

“Unless they have given some signs of repentence before their death, deceased persons who had lived openly in a same-sex marriage giving public scandal to the faithful are to be deprived of ecclesiastical funeral rites,” the letter continues. “In case of doubt, the proper pastor or parochial administrator is to consult the local ordinary, whose judgment is to be followed (cf. c. 1184).”

Unless they gave some signs of repentance before death, the following must be deprived of ecclesiastical funerals:

2/ those who chose the cremation of their bodies for reasons contrary to Christian faith;

3/ other manifest sinners who cannot be granted ecclesiastical funerals without public scandal of the faithful.

The Catechism of the Catholic Church defines scandal as “an attitude or behavior which leads another to do evil” (CCC 2284). It labels homosexual acts “intrinsically evil,” stating, “under no circumstances can they be approved” (CCC 2357).

“In those situations where homosexual unions have been legally recognized or have been given the legal status and rights belonging to marriage, clear and emphatic opposition is a duty,” the Congregation for the Doctrine of the Faith said in its document Considerations Regarding Proposals to Give Legal Recognition to Unions Between Homosexual Persons.

“I know it would be much, much easier to deal with things like my bank accounts and, most especially, my dog if I had a legal spouse who lived on after me,” Winters wrote of why he'd “marry” a man if he had six months to live. “Thanks be to God I do not live in the diocese of Springfield, Illinois, but if I did, would Bishop Paprocki deny me a Christian funeral? If so, what 'manifest sin' would warrant that?”

“If I were a bishop…I would issue a decree that Tom Paprocki can't be buried in my diocese,” he declared.

Winters quoted pro-gay Jesuit Father James Martin, who blasted Paprocki's new guidelines. Winters lamented the “increasingly small” group of “conservatives who insist that gay marriage is the hill upon which the church and the culture should fight and die.”

It's an issue from which “we need to move on,” he wrote.

“The motu proprio Come una madre amorevole was issued in response to the need to remove bishops who have been negligent in the handling of clergy sex abuse allegations, but the text did not limit its scope exclusively to that single issue,” Winters concluded. “When a bishop so misunderstands both the culture and the Gospel, to say nothing of the role of a bishop, that he would issue a decree like Paprocki has done, he has demonstrated that he is too unhinged to lead a local church. Before he does further damage, he should resign or be fired.”

Paprocki holds a licentiate and doctorate in canon law from the Pontifical Gregorian University in Rome, in addition to a civil law degree from DePaul University and theology degrees.

There are many times throughout the Gospel when Jesus said things that would likely be considered “unpastoral” or “harsh.”

“Have you not read that from the beginning the Creator 'made them male and female' and said, 'For this reason a man will leave his father and mother and be united to his wife, and the two will become one flesh'?” Jesus said in Matthew 19:4.

“A diocesan bishop, frequently preaching in person, is bound to propose and explain to the faithful the truths of the faith which are to be believed and applied to morals,” instructs the Code of Canon Law. “He is also to take care that the prescripts of the canons on the ministry of the word, especially those on the homily and catechetical instruction, are carefully observed so that the whole Christian doctrineis handed on to all” (Can. 386 §1).

According to the Code of Canon Law, “Since he must protect the unity of the universal Church, a bishop is bound to promote the common discipline of the whole Church and therefore to urge the observance of all ecclesiastical laws” (Can. 392 §1).