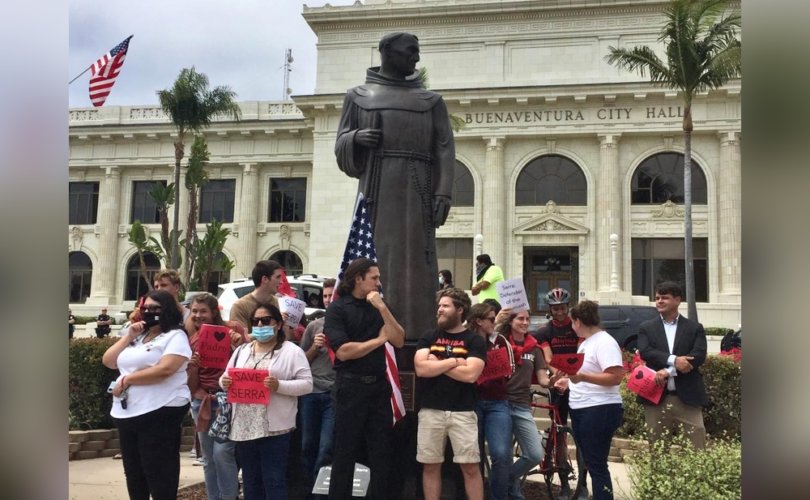 VENTURA, California, June 25, 2020 (LifeSiteNews) – A group of courageous young Catholics surrounded the statue of a saint in Ventura, California last Saturday, placing their bodies in between Junipero Serra and the mob who wanted to tear him down.

The anti-Serra demonstrators had put out a call on social media for the June 20 event that began at 1 PM. Calling the event “Tear down Junipero Serra,” the demonstrators stated that “No longer shall we celebrate the enslavement, rape, and genocide of the original people of Ventura.”

That same weekend, statues of Catholic saint Serra, considered the founder of the California missions, were toppled and defaced in San Francisco’s Golden Gate Park and historic Olvera Street in Los Angeles. Serra, a Spanish Franciscan missionary to the United States, helped to found nine missions in California in the late eighteenth century. He established the mission of San Buenaventura in 1782, which is now present-day Ventura. His statue was erected at city hall in 1936. The current bronze statue was erected in 1989. Pope Francis canonized him in 2015.

At 1 PM, anti-Serra demonstrators, about 200, gathered near the statue of the saint, located in front of Ventura’s city hall, where they began a rowdy demonstration.

Rally speakers addressed a diverse and vocal crowd whose slogans included “Black Lives Matter” and who held signs reading “He Ain’t No Saint” and “Father Genocide.”

Some speakers, like local Chumash elder Julie Tumamait-Stenslie, appealed for a peaceful and ordered removal of the statue, while others tried to rally the crowd to pull the statue down immediately, with repeating chants of “Tear it down! Tear it down!”

Some of the anti-Serra crowd appeared to have brought tools needed to pull the statue down, video evidence shows.

But, thanks to the saint’s new bodyguard of dozens of young Catholics, including a priest, the city’s Serra statue was not toppled. Padre Serra continued to gaze out over Ventura from his place in front of City Hall as the sun went down Saturday evening.

Prior to the 1 PM demonstration, dozens of pro-Serra activists had surrounded the statue to protect it from the vandals. As the rally began, they stood quietly, some holding signs reading “Save Serra,” some praying.

Any attempt to pull down the statue would have meant forcibly removing those who encircled its base, something which the anti-Serra demonstrators had not anticipated. The counter-protesters — mainly Catholic college students — were unmoved by taunts, insults, and the cloud of exhaust from a generator that rally organizers had placed close to them.

California Catholic Daily reported that at one point, anti-Serra protesters made a rush on the statue:

As the event wore on with the statue still undamaged, some [anti-Serra] speakers tried to work the crowd into a frenzy. When one asked, “Who’s with me?” for tearing down the statue at that moment, and pointed the way, the crowd made a rush. The [Serra] supporters closed ranks around the pedestal and stared down a man brandishing a metal stake at the head of the crowd. He swung it threateningly until one of the [Serra] supporters grabbed hold of it. Meanwhile, another [Serra] supporter ran down the street to a parked squad car and asked the police to come closer. A few cars pulled up with lights and sirens, cooling the fervor of the crowd.

At Tumamait-Stenslie’s invitation, Father Tom Elewaut, pastor of the historic Mission San Buenaventura, the final mission established by Junipero Serra, addressed the crowd and then joined pro-Serra activists at the base of the statue.

As the rally officially ended, Rev. Elewaut blessed those gathered to protect the statue.

By about 4 PM, activists on both sides had dispersed.  The statue of Ventura’s founder remained, but its fate continues to be uncertain as city officials, church leaders, and tribal elders continue to negotiate its fate.

The bishops of California later in the week issued a carefully worded statement expressing their disapproval of the tearing down of statues of the saint.

While Saturday’s victory may be only a temporary reprieve, the Catholic young people went home that day knowing that they had accomplished an important symbolic victory.

A change.org petition to save Ventura’s statue of Saint Junipero Serra has gathered thousands of signatures:  “Fr. Serra Statue In Ventura:  We Must Preserve our History, and Learn from It.”