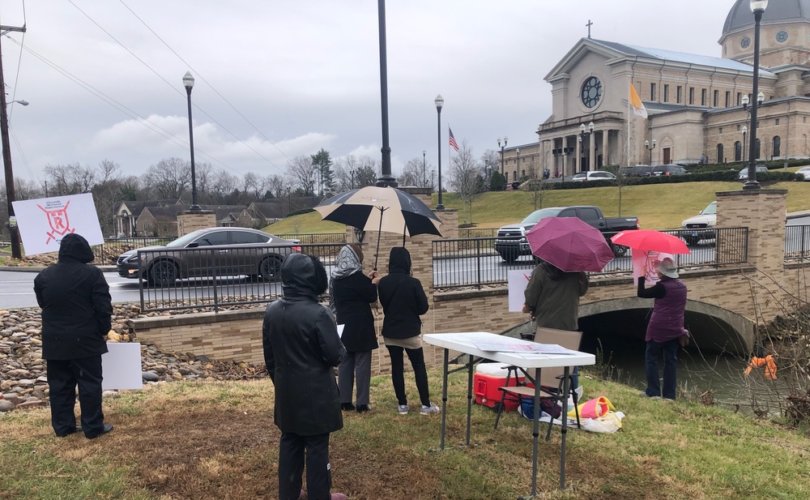 Protesters at Sacred Heart Cathedral, Knoxville, after being moved off the cathedral premises

KNOXVILLE, Tennessee (LifeSiteNews) — Peaceful protesters of the experimental “vaccination” of minors on the grounds of the Catholic Diocese of Knoxville cathedral are awaiting trial after they were arrested at the Church’s request on Sunday for trespassing.

Jenny Hay, a co-organizer of the protest, and fellow protesters were praying outside the entrance of Sacred Heart Cathedral, where they planned to pass out “Vax Facts” flyers to clinic attendees, when they were asked to leave the property.

The flyers warned of the severe health risks COVID jabs pose to minors, who were among those being vaccinated by the Knox County Health Department in a hall at Sacred Heart Cathedral.

Hay told LifeSiteNews that the clinic had not yet begun when Scott Barron, the cathedral’s director of campus events, asked her group to leave, as the rector of the cathedral, Father David Boettner, had previously warned them.

The group “respectfully declined,” Hay said. Then, she said, “Mr. Barron radioed to Knox County Sheriffs who were already on the property. We again were given the opportunity to leave. I and another gentleman again respectfully refused.”

She and the gentleman were then handcuffed and arrested.

Hay said the captain of their local Church Militant Resistance guided the remaining protesters, including those who came later in the day, “just off the premises to continue a more vigorous protest.”

She recounted how the other gentleman who was arrested prayed the rosary during the arrest and as they were driven to a detention center, where they were held for six hours before being transferred to jail cells. Hay was in her cell for another three hours before being released at 9 p.m. on her “own recognizance” to remain at liberty until her trial. The gentleman was released in a similar manner at 8 a.m. the next morning.

Hay told LifeSiteNews that she plans to plead “not guilty” at her trial. She acknowledged that while a Catholic can’t do anything he wants on Church property, because the vax clinic was advertised as a public event run by a government entity — in this case, the Knox County Health Department — “the pastor forfeits the authority to prohibit public protests of that event.”

She explained that her firm moral conviction against the clinic was motivated by what she describes as a “deprav[ed]” situation: The experimental “vaccination” of minors with a shot that has been shown to pose a risk of severe myocarditis to youth, for a virus that poses virtually no risk of mortality for youth.

“I will not allow a government entity to do something immoral on church property, leastwise, not without a public challenge,” she wrote.

In the “Vax Facts” flyers, Hay had shared, among other relevant points, that severe cases of myocarditis have followed COVID “vaccination” of youth in Tennessee. She also noted that children have an almost nonexistent risk of dying from COVID. (According to the Knox County Health Department, the risk of death to someone under age 18 is about 0.001%), and taking that into account, “It is a violation of the Hippocratic Oath to give a child a vaccine for the purpose of protecting anyone other than a child.”

The clinic was open to children age 12 and up, but as Hay pointed out in a letter to Bishop Richard Stika, “no COVID vaccine has full FDA approval for anyone under the age of 16.” She further noted that “by definition, a vaccine which lacks full FDA approval is experimental.”

“What if one child suffers serious injury due to an experimental vaccine received at our Cathedral of the Most Sacred Heart of Jesus? Have diocesan attorneys fully understood this liability and given it their approval?”

“My heart is for children. If diocesan churches wish to host vaccination clinics restricted to adults only (18+), you’ll get no resistance from me. But I beg you, from the depths of a mother’s heart, to cancel this clinic and forbid all other vaccine clinics involving children on diocesan property,” she continued to Stika.

Hay elaborated on her thoughts as to why minors are being vaccinated in an email to fellow concerned Catholics.

“There is one semi-rational reason to vaccinate children — to protect the adults around them.  But by ignorance or conscious decision, our Knoxville pastors do not teach the depravity of this intention. Since when do Christians use children’s bodies to protect adults?” Hay wrote.

Hay said that when the leaders of the Diocese of Knoxville are “confronted with the facts, they quip, ‘Parents should have the right to decide for their own children.’”

“However, most parents do not really understand that their children will be receiving an experimental vaccine, nor do they comprehend the truly remote threat of COVID to their children,” she continued.

Commenting on the outcome of the clinic protest, Hay echoed the words of Mother Teresa: “We are not called to be successful. We are called to be faithful.”