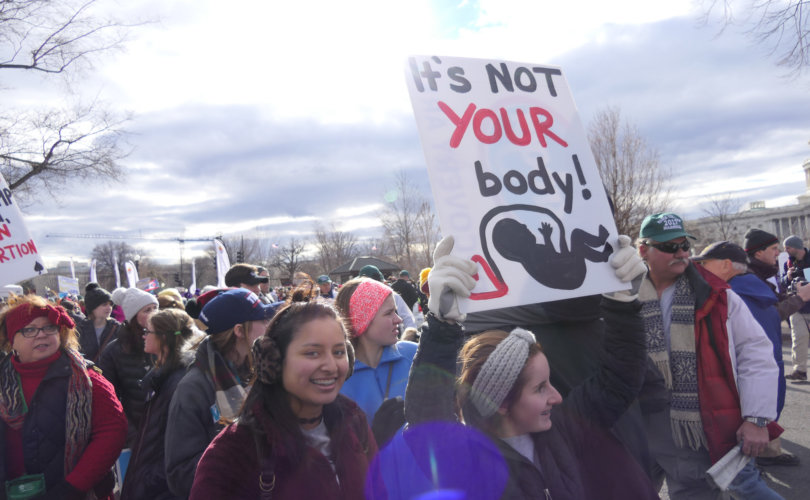 A sign at the 2017 March for Life Claire Chretien / LifeSiteNews

WASHINGTON, D.C., January 16, 2018 (LifeSiteNews) – Catholics participating in the 2019 March for Life are eligible to receive a plenary indulgence by doing so, Bishop Michael Burbidge of the Diocese of Arlington announced.

“As was the case last year, the Apostolic Penitentiary of the Holy See has granted a plenary indulgence that may be obtained, under the usual conditions, by those who participate in the sacred celebrations carried out on January 17 and 18,” Burbidge, whose diocese is right next to Washington, D.C., announced Tuesday.

Burbidge didn’t specify which March for Life activities count as “sacred celebrations,” but he made the announcement while encouraging his flock to participate in the U.S. bishops’ “9 Days for Life” novena campaign, the Diocese of Arlington’s annual Life is Very Good rally the evening before the March, and the March itself.

Often misunderstood or simply unknown to many Catholics, an indulgence is a way to cut time off of Purgatory either for oneself or for a soul who has already died. Purgatory is the state in which souls are as they are purified to enter heaven.

“All who die in God's grace and friendship, but still imperfectly purified, are indeed assured of their eternal salvation; but after death they undergo purification, so as to achieve the holiness necessary to enter the joy of heaven,” the Catechism of the Catholic Church teaches (CCC 1030).

Purgatory is “entirely different from the punishment of the damned,” the Catechism explains, and Catholic doctrine on Purgatory was formulated “especially at the Councils of Florence and Trent” (CCC 1031).

The tradition of the Church, by reference to certain texts of Scripture, speaks of a cleansing fire, the Catechism says (1 Cor 3:15 and 1 Pet 1:7).

A common analogy that catechists use to explain Catholic teaching on sin, confession, purgatory, and indulgences involves sewing.

Serious sins are like thick, red thread sewn into a white handkerchief. Confession pulls those threads out, but the needle and thread have still left the holes on the handkerchief, making it imperfect. Purgatory is the filling of those holes – and so is the gaining of a plenary indulgence – so that the handkerchief can be completely whole and untainted again.

Catholic doctrine on Purgatory and indulgences reveals a major difference between Catholic and Protestant theology about whether one’s actions, assisted by grace, can remove temporal punishment due to sin.

The Catholic Church teaches that a plenary indulgence – the kind available to Catholics attending the 2019 March for Life – frees a person from all temporal punishment due to sin.

In other words, if a Catholic properly received the plenary indulgence at the 2019 March for Life and then immediately died, he would go straight to heaven rather than spend some time in Purgatory.

Those unable to attend the March for Life events can still obtain an indulgence.

“The elderly, sick and homebound may also gain a plenary indulgence if they spiritually unite themselves to these events and make their prayer and penance an offering to God,” Burbidge advised.

“The month of January provides us with opportunities to express our belief in the dignity and value of all human life and to provide public witness that we will not be silent when injustices like abortion continue to have a place in our society,” said Burbidge. “Each year, people from around the country gather in our nation’s capital for the March for Life. I take this opportunity to thank all who travel from great distances to take part in public action on behalf of those who cannot speak out for themselves. Most especially, I thank our parishes for their participation and the hospitality they show to others throughout this week.”

“I pray that one day we, united in prayer, and persistent in our advocacy for the unborn and the vulnerable, will root out any instance of injustice or violence against human life,” he continued.

Last year, Burbidge announced the availability of a plenary indulgence to March for Life participants via a letter with Washington, D.C.’s Cardinal Donald Wuerl.

LifeSiteNews has been unable to find a statement on this year’s indulgence from Wuerl, whose resignation has been accepted by Pope Francis and is now the archdiocesan apostolic administrator, this year. Wuerl has been enmeshed in controversy over his handling of sex abuse cases as Bishop of Pittsburgh and his claims that he knew nothing of the serial sexual predation of his predecessor, disgraced ex-Cardinal Theodore McCarrick.

The Archdiocese of Washington confirmed today that this year Wuerl will not be the celebrant of the archdiocese’s annual Youth Rally and Mass for Life the morning of the March for Life. It’s unclear if he will be present at the Vigil for Life Mass in his archdiocese’s basilica on Thursday evening.