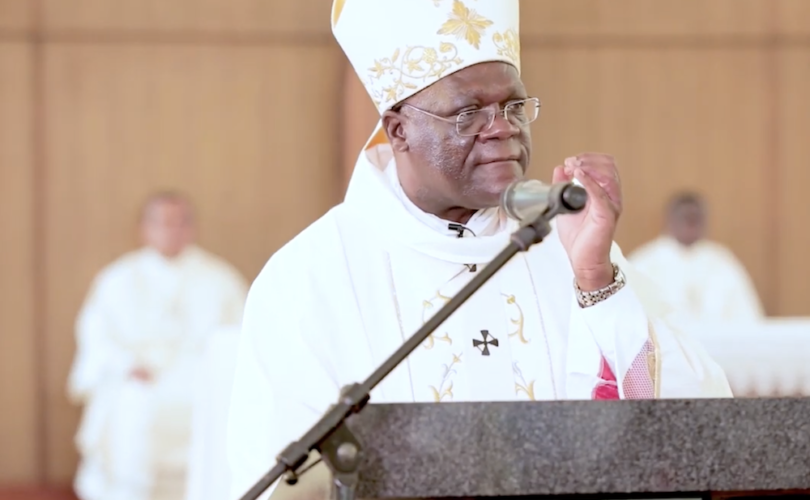 LUSAKA, Zambia (LifeSiteNews) – In a united affirmation of the Church’s moral teaching, the Zambia Conference of Catholic Bishops (ZCCB) has issued one of the strongest statements to date of a bishops’ conference condemning homosexual acts as disordered and sinful and calling the Church’s “erring children, including those with homosexual tendencies … to do what is right before God and men.”

The statement was issued as a press release on September 29, 2022, signed by Rev. Fr. Francis Mukosa, Secretary General of the ZCCB, in response to controversy on social media and in the press following a strong statement made by the Archbishop of Lusaka, Alick Banda, on September 17, which called attention to “an increase in the number of incidents and events that promote LGBTG+ tendencies contrary to the Laws of Zambia and our Zambian culture.”

Detailing a number of incidents, the archbishop stated, “On Tuesday the 17th May 2022, the Swedish and Finnish Embassies in Lusaka flew gay pride flags, contrary to the provisions of article 20 of the Vienna Convention[.]”

“On Saturday, the 3rd September 2022, a company called PR Girl Media Limited hosted an event dubbed ‘Lusaka July 2022’ at Lusaka Polo Club. Pictures and videos that emerged from this event showed attendants double dressing in attires of the opposite sex and appearing to promote LGBTQ+ behaviour.”

Citing several other cases of sodomy, which have met with “the displeasure and disapproval of the general public,” the archbishop then denounced the Zambian president and police for failing to apply Zambia’s laws, which criminalize sodomy, saying, “the law enforcement agents and the President who took oath to protect the Constitution seem to be paying a blind eye.”

— Article continues below Petition —
Demand that the Archdiocese of Indianapolis let Kim Zember speak!
Show Petition Text
5015 have signed the petition.
Let's get to 6000!
Thank you for signing this petition!
Add your signature:
Show Petition Text

However, Archbishop Banda pointed out, authorities were not so tolerant of a peaceful protest that objected to the apparent acceptance of homosexuality. “On Friday, the 16th September 2022,” the prelate recounted, “when a group of concerned citizens decided to undertake a peaceful protest in order to raise awareness to the ever escalating cases of homosexuality and sodomy in the country, the Police were quick to apprehend them together with journalists who were covering the event. These were detained, arrested and charged with unlawful assembly.”

“If nothing is done to raise awareness among our people,” the archbishop warned, “LGBTQ+ will become an acceptable norm in Zambia, despite the existence of laws that criminalizes these activities and worse still being offensive to our Cultural and Christian values.”

In response to the archbishop’s statement, Zambian government spokesperson Chushi Kasanda attempted to defend the president, Hakainde Hichilema, saying, “Government also wishes to dismiss allegations by some sections of our society that it supports homosexuality. The accusations are unfair and unfounded. Government has been consistent, before and now, in office, that it does not support LGBT. Police and other law enforcement agencies remain active and engaged in pursuing cases of LGBT whenever and wherever they are reported.”

“Government also wishes to call upon parents, the church, the traditional leadership, Non-Governmental Organisations and other stakeholders to join hands in scaling up the fight against LGBT,” Kasanda stated.

Here is the full text of the press release:

Having followed with dismay, the divergent comments and misinterpretations that have recently flooded social media on the position of the Zambia Conference of Catholic Bishops (ZCCB) on homosexuality in Zambia, the Conference would like to dispel the purported ambiguity or contradiction surrounding the subject matter.

The Catechism of the Catholic Church states the following in number 2357: “Homosexuality refers to relations between men or between women who experience an exclusive or predominant sexual attraction toward persons of the same sex. … Basing itself on Sacred Scripture, which presents homosexual acts as acts of grave depravity (Cf. Gen 19,1-29; Rom 1,24-27; 1 Cor 6,10; 1 Tim 1,10), tradition has always declared that ‘homosexual acts are intrinsically disordered.’ They are contrary to the natural law. They close the sexual act to the gift of life. They do not proceed from a genuine affective and sexual complementarity. UNDER NO CIRCUMSTANCES CAN THEY BE APPROVED.”

Following the example of our Lord Jesus Christ, the Good Shepherd, who came into the world so that all men and women “may have life and have it to the full” (Jn 10,10), the Church is mandated to spread the Gospel of Jesus Christ to all people and to minister to all people in his name. In this regard, the Church is called to provide appropriate assistance and accompaniment to all her erring children, including those with homosexual tendencies, so that they may learn to do what is right before God and men. Many forces in our society promote a view of sexuality in general, and homosexuality in particular, that is contrary to God’s purpose and plan for human sexuality.

The pastoral charge of the Church as stated above does NOT in any way, suggest the abrogation of the laws of the land. Practicing homosexuality constitutes a criminal offence in Zambia and the law has to be respected.

In view of the foregoing, we wish to sate categorically that any position statement circulating on social media that contradicts what is contained in the present Press Statement, is the opinion of its own authors and does not engage the Zambia Conference of Catholic Bishops (ZCCB).

In Zambia, homosexual acts and other “acts of gross indecency” are a criminal felony punishable with years in prison. In 2018, two men were sentenced to 15 years in prison for engaging in homosexual acts that the court held as “against the order of nature.” The judgment was upheld a year later by a higher court in accord with the country’s laws. In the face of public criticism and threats from the U.S. Ambassador at the time, Daniel Foote, then-President of Zambia Edgar Lungu strongly defended the nation’s laws as in following the clear teaching of the Bible and the order of nature.

“We know that there could be people who are homosexual in Zambia,” Lungu said, “but we don’t want to promote it. We frown on it … the practice … most of us think it’s wrong … it’s unbiblical and unchristian … and we don’t want it.”

Slamming Western countries for adopting and legalizing unnatural vice, the president continued, “Even animals don’t do it, so why should we be forced to do it … because we want to be seen to be smart, to be seen to be civilized and advanced and so on. If there are such countries which will allow bestiality, let them do it but not here.”

Undergirding Zambia’s criminal laws against homosexual acts is the fact that the country acknowledges itself to be a Christian nation. The preamble to its constitution expressly states, “We, the People of Zambia: acknowledge the supremacy of God Almighty; declare the Republic a Christian Nation.” It is in keeping with this Christian identity that the country continues to outlaw sodomy as morally wrong and criminal.

US withdraws ambassador who urged Zambia to embrace homosexuality