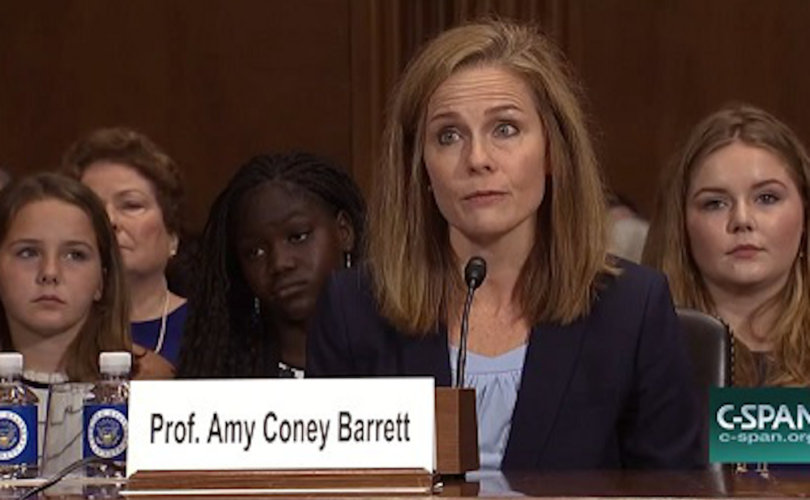 WASHINGTON, D.C., September 8, 2017 (LifeSiteNews) – Democratic Senator Dianne Feinstein’s assailing of a Catholic judicial nominee for her faith continues to draw fire from Catholics and others.

Despite the Constitution’s prohibition of religious litmus tests for judicial appointments, Feinstein attacked University of Notre Dame law professor Amy Coney Barrett, a Catholic mother of seven and nominee for the 7th Circuit Court of Appeals, during Barrett’s confirmation hearing Wednesday with the now infamous statement, “The dogma lives loudly within you.”

Feinstein’s comments, widely presumed to reference the Roe vs. Wade decision legalizing abortion, came after Barrett had already stated in the confirmation hearing that “It is never appropriate for a judge to apply their personal convictions whether it derives from faith or personal conviction.”

Senate minority whip Dick Durbin disapproved of Barrett’s use of the term “orthodox Catholic,” claiming it unjustly maligns Catholics who do not hold certain stances on abortion or the death penalty.

“Do you consider yourself an orthodox Catholic?” questioned Durbin, a Catholic and an abortion supporter.

Hawaii senator Mazie Hirono also pointedly told Barrett, “I think your article is very plain in your perspective about the role of religion for judges, and particularly with regard to Catholic judges.”

Townhall.com’s Cortney O’Brien noted  how Feinstein stood out from the repetitive grilling from some Senators on the Judiciary Committee with “by far the most inappropriate line of questioning.”

O’Brien noted as well that Feinstein had similarly singled out Supreme Court Justice Neil Gorsuch. Feinstein also told Gorsuch the Roe vs. Wade decision had “super precedent,” then questioned him on whether he believed that to be true.

“Feinstein has once again gotten away with her rude religious litmus tests,” O’Brien wrote. “Would that be the case if Barrett was of a different faith?”

Lachlan Markey, White House correspondent for The Daily Beast, was among those pointing out that this type of religious questioning would likely never have been tried with a nominee from other faith traditions.

Try to imagine the reaction to this comment in the context of any other religion and federal post. A Muslim at CIA, say. Or a Jew at the Fed https://t.co/4Onv62KlNO

“It is said one of the biggest mistakes a politician can make is to accidentally tell people what you really believe,” the group said. “Senator Feinstein and Durbin made clear once again the deep-seated bias and bigotry within the Democratic Party when it comes to people of faith — especially against Catholics in public life.”

“What these Senators did today was truly reprehensible,” the CV statement continued. “We urge Senator Feinstein and Senator Durbin to apologize for their shameful attack on Professor Barrett, a superb and eminently qualified nominee.”

Representatives from advocacy group The Catholic Association also weighed in.

“Senator Feinstein's shockingly illegitimate line of questioning sends the message that Catholics need not apply as federal judges,” Ashley McGuire, senior fellow for the group, told LifeSiteNews. “Rather that unconstitutionally discriminating against Amy Barrett on the basis of her faith, Senator Feinstein should focus on her exceptional qualifications for the job.”

“Senators Feinstein and Durbin know full well that the Constitution prohibits any religious test for office, yet they proceeded with an offensive grilling of a highly qualified judicial nominee asking inappropriate questions about her Catholic faith,” Ferguson said. “Senator Durbin asked directly, 'Do you consider yourself an orthodox Catholic?' Imagine the universal outrage had a nominee of a different faith been asked the same questions; there is clearly a double standard at work.”

The Catholic League for Religious and Civil Rights said in a statement that Durbin and Feinstein “came perilously close to applying a religious test” to Barrett, which is unconstitutional.

Bill Donohue, president of the Catholic League, wrote open letters to the two senators regarding the matter.

“No one was fooled by your question,” Donohue told Feinstein about her “dogma living loudly” comment to Barrett. “Why didn’t you come right out and ask her if she takes her judicial cues from the Vatican? That would have been more honest.”

Donohue quizzed Durbin, “Have you ever probed the faith of a non-Catholic for the federal bench? If so, please share the information with me. If not, try treating Catholics – especially orthodox ones – as equals.”

OrangeCountyBreeze.com’s Shelley Henderson wrote in an editorial that “Senator Feinstein just about says flat out that an “orthodox” Catholic is unfit to be a judge.”

“Mrs. Feinstein might consider the demographics of sitting Supreme Court justices: six are Roman Catholic, three are Jewish,” she continued. “She might also usefully review the text of the First Amendment” (for the free exercise of religion clause).

The Canada Free Press ran author Dan Calabrese’s column on Barrett’s confirmation questioning in which Calabrese reasoned that Feinstein berated Barrett for her Catholicism because of its likelihood to conflict with the Democrats’ line on abortion policy.

He also pondered the apparent weak spot in enforcing the constitutional prohibition against a religious test for service in government.

“Democrats are discovering that much of what the Constitution says you can’t do, you can do, if only in the sense that there’s no practical way for anyone to stop you,” Calbrese wrote. “The more they try this and pay no price, the more ballsy they’re going to become about pushing it further. Then what?”