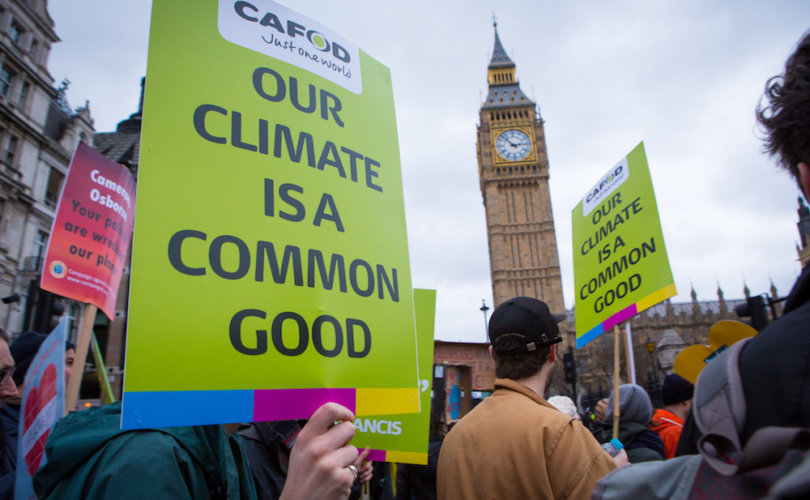 LONDON, May 10, 2016 (LifeSiteNews) – The UK bishops’ overseas charitable arm was caught up in an abortion controversy in recent weeks as one of its advisors called on the Polish bishops to back off their support of a pro-life law in their country.

Dissident British Catholic theologian Tina Beattie, a key figure behind the campaign directed at the Polish Bishops, sits on the Theological Advisory Group for the Catholic Agency for Overseas Development (CAFOD).

In response to Beattie’s abortion advocacy, CAFOD has insisted the campaign doesn’t reflect its own stance. But CAFOD has not responded to LifeSiteNews’ multiple requests for comment on whether Beattie would remain one of their advisors.

Beattie is a professor of Catholic Studies and the director of the Digby Stuart Research Centre for Religion, Society and Human Flourishing at the University of Roehampton. She is former president of the Catholic Theological Association of Great Britain, a member of the National Board of Catholic Women’s Bioethics Subcommittee. Beattie is also a trustee of the Britain’s progressive Catholic publication The Tablet.

The letter to the Polish bishops that Beattie signed made the case that “access to early, safe and legal abortion is essential” in cases of rape, fetal disability, or when the mother’s life is in danger.

Other than Beattie, few signatories of the letter were theologians.  A painter, an art historian, an administrative professional, translators, and others in professions unrelated to theology signed the letter.  It said in part:

We appreciate the complex ethical challenges involved in any intentionally abortive act. However, we also believe that our Catholic faith calls us to be attentive to suffering in all its forms, and to respond with trust in the mercy, forgiveness and compassion of God when faced with with [sic] profound moral dilemmas that offer no clear solution. In situations where abortion is deemed necessary – such as those currently permitted under Polish law – we believe that access to early, safe and legal abortion is essential.

Beattie’s involvement has caused the letter to be dubbed the “Beattie Petition.”

Polish law currently allows for abortion in cases of rape, risk to the mother’s life, and if the unborn child has a disability.  The proposed law, if enacted, would ban abortions in all of those instances.

CAFOD distances itself from Beattie Petition

“CAFOD is an agency of the Bishops’ Conference of England and Wales. We take this

responsibility very seriously,” CAFOD’s statement said. “As such, our policies and practice adhere to Church Teaching. CAFOD's mandate from the Bishops' Conference is focused on issues of international development.”

“The opinion expressed in the letter does not represent nor reflect CAFOD’s policies,” the statement continued.  “CAFOD appreciates the opportunity to dialogue with theologians on ethical issues arising from our work. We acknowledge that issues related to conscience, mercy and law are complex and have always been the subject of debate among Catholic moral theologians. In practice CAFOD then makes its own decisions on policy and practice, always in accordance with Church teaching.”

“I’d like to see more detail” from CAFOD, Dr. Joseph Shaw, a research fellow at Oxford’s St. Benet Hall and chairman of the Latin Mass Society of England and Wales, told LifeSiteNews.  Shaw recently strongly analyzed the problems in the Beattie Petition and its incompatibility with Catholic moral teaching.

Shaw said he would like CAFOD “to reassure their many, many Catholic supporters” that the agency does “not support legal abortion under any circumstances.”

“I’m glad that CAFOD implicitly recognises the grave moral errors in the ‘Beattie Letter’ and has acted to distance themselves from it,” Rev. Nick Donnelly, a deacon, journalist, and columnist for Catholic Voice Ireland, told LifeSiteNews.  “It’s a good beginning, but CAFOD needs to go further. … Tina Beattie is well known as an advisor to CAFOD.  Therefore, CAFOD needs to state explicitly why the ‘Beattie Letter’ is incompatible with Catholic moral teaching.  After all, abortion and contraception are constantly being forced onto the agenda of international development by the UN & EU.  This comes under CAFOD’s remit.”

Beattie has remained a part of CAFOD’s Theological Advisory Group despite her history of supporting same-sex “marriage” and condemning the Catholic Church’s teaching on divorce and contraception.  In 2014, Archbishop Leo Cushley banned Beattie from speaking on Church property in the Archdiocese of St. Andrews and Edinburgh due to her frequent questioning of Catholic doctrine.

“The best thing would be for Tina Beattie to reconsider her advocacy of early abortion, and issue a public retraction of the letter to the Polish Bishops she organised with others,” said Donnelly.  “If she decides that she is unable to do this, then she should voluntarily step down from her role with CAFOD.  Otherwise, I think Chris Bain, CAFOD’s Director, and the trustees, should remove her from this official role.  How can a theologian who doesn’t 100% uphold the Catholic Church’s moral teaching on abortion remain as a theological advisor?”

“I really don’t understand why an agency of the Bishops’ Conference of England & Wales would retain as a theological advisor anyone who holds positions contrary to the Church’s teaching,” Donnelly continued.  “I assume that CAFOD’s staff and trustees refer to theologians on the Theological [Advisory Group] for expert advice on Catholic theology. Over the years Prof. Beattie has publicly opposed the Church’s teaching on abortion, contraception, so called homosexual ‘marriage’ and the ordination of women.  If Prof. Beattie has publicly repudiated the Church’s authority over these fundamental doctrines how can she give advice on Catholic theology to a Catholic development agency?  Her role at CAFOD doesn’t make sense.”

Another interesting development from the United Kingdom comes from a homily Cardinal Vincent Nichols, the Cardinal Archbishop of Westminster, delivered last month at Ealing Abbey at a Mass celebrating the 1050th anniversary of the Baptism of Poland.

“I applaud the appeal made by [Polish] bishops on 30 March, in the context of these anniversary celebrations, that Government and leaders take initiatives and launch programmes to provide practical help for those in the most difficult situations: those with profoundly sick children, those with children who have severe special needs, and those with children conceived unwillingly, sometimes even in violence,” said Nichols.  “This appeal is so right. This is the work that we all need to do to create the circumstances in which recourse to abortion is recognised for what it is: the destruction of an innocent human life and a tragic intervention into a woman’s life.”

Nichols didn’t specifically mention the proposed law banning abortion in all cases, only his support for the Polish bishops’ call for programs and initiatives that help children who are sick, have special needs, or are conceived in rape.

Some want to argue that abortion can be a right in conscience. This cannot be so because abortion is always the destruction of innocent life. As Pope Francis says ‘Every child growing within the mother’s womb is part of the eternal plan of God the Father, with a place in God’s heart from all eternity….We need to see it with the eyes of God, who always looks beyond mere appearances’ (168).

Like Pope St John Paul before him, Pope Francis recognises that often difficult circumstances can cause a lack of freedom that leads a woman to the painful and agonising decision to undergo an abortion. This can never really be the best choice as it leads to a dreadful wound in the mother and the destruction of innocent human life. God’s mercy can heal this wound, especially through the Sacrament of Reconciliation with repentance and desire for a new start. At this time, then, we work and pray, with your bishops, to overcome these terrible circumstances so that those trapped in them never think to include in their actions the destruction of innocent human life. This is a work worthy of this great anniversary.

“I know many faithful, pro-life Catholics have been encouraged and energised by Cardinal Nichols’ powerful homily marking the 1050 anniversary the Baptism of Poland,” said Donnelly.  “His Eminence’s strong criticism of arguments that seek to justify abortion by appealing to conscience is being seen as a clear repudiation of the ‘Beattie Letter’. As the Archdiocese of Westminster tweeted, Cardinal Nichols supports the Polish Bishops.”

In the past, Nichols has made a number of comments on abortion and homosexuality that have caused Catholics concern.

In 2008, Nichols sparked strong criticism from pro-life Catholics when he suggested to a BBC radio interviewer that embryonic human beings don’t share the same moral worth as adults. “What we’ve been trying to say all along is ‘What is the value that we give to human life in its first beginnings?’ Now clearly it’s not the same as we would give to another adult sitting next to me,” Nichols said.

In his encyclical Evangelium Vitae, Pope St. John Paul II wrote, “Human life is sacred and inviolable at every moment of existence, including the initial phase which precedes birth.”

Nichols has also faced criticism for his support of a homosexual group in diocese that marches in Gay Pride parades and openly embraces same-sex relationships. He has himself previously suggested the Church could one day accept same-sex unions.