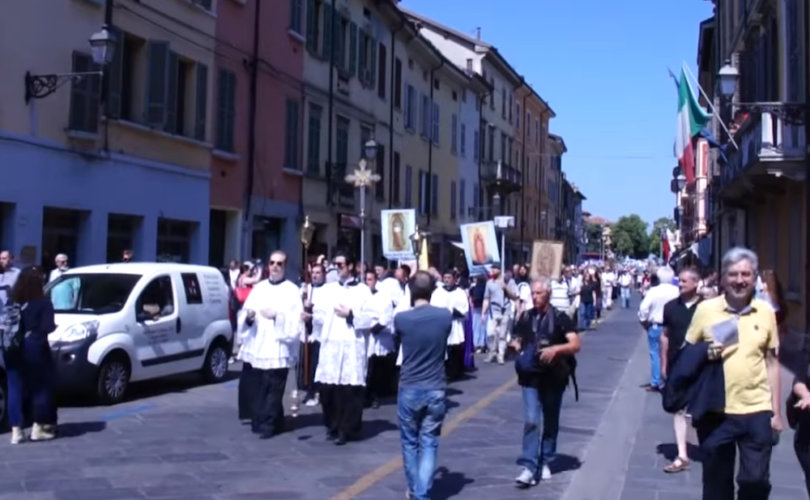 MILAN, Italy, July 6, 2017 (LifeSiteNews) — More Italian Catholics have been doing public penance in reparation for the sins celebrated by local “Gay Pride” events. A prayer procession in Reggio Emilia has been followed by similar gatherings in Milan and other smaller cities.

An estimated 100 penitents gathered in the center of Milan on June 29 before embarking on their prayerful walk through the Castello Sforzesco district. Among them were five young men in cassocks and at least one priest.

“We are here because on June 24 homosexual pride paraded here,” a young man in a Roman collar told the crowd, “something today many people consider a right and in which they see nothing wrong. But we are not indifferent to it because we know that, in reality, events like these represent the flaunting and the ennobling of acts and behaviors that constitute a grave sin.”

A spokesperson for the Archdiocese of Milan told a reporter from Milan Today that they had no knowledge of the procession or who the diocesan priest involved in it might be.

Similar processions have taken place in the Italian cities of Pavia and Varese.

Responding to objections that most Catholics no longer know about prayers of reparation, Paolo Deotto of Riscossa Christiana (Christian Restoration) argued that this in itself was an argument for such processions.

“Well, if ‘people don’t understand,’ we would have an excellent motive to pray in reparation for sins, to participate in a procession, to recite the Holy Rosary,” he wrote. “People would begin again to see those actions which [once] were common and well-known. A great example comes from [the reparation in] Reggio Emilia, where many people stood stupefied — it’s very true — but many, after their stupor, joined the procession, and many made the sign of the Cross at its passing.”

To complaints that turnouts have been comparably small, Deotto answered, “Let’s remember that Truth is not measured in numbers.” He argued also that penance for the Pride parades is necessary.  “The offense [to God] remains, and what should we do about it? Pray in reparation. It’s all very simple and consistent.”

Vatican-based journalist Marco Tosatti observed that these processions have been organized not by the Catholic clergy but by the laity. “You might think that [public reparation for sin] could or should be the business of priests. But obviously this is not the case,” he wrote. Echoing Paolo Deotto, he stated that, “If there’s a sin that offends God, then Christians can, and perhaps must, pray to ask pardon for the offense.”