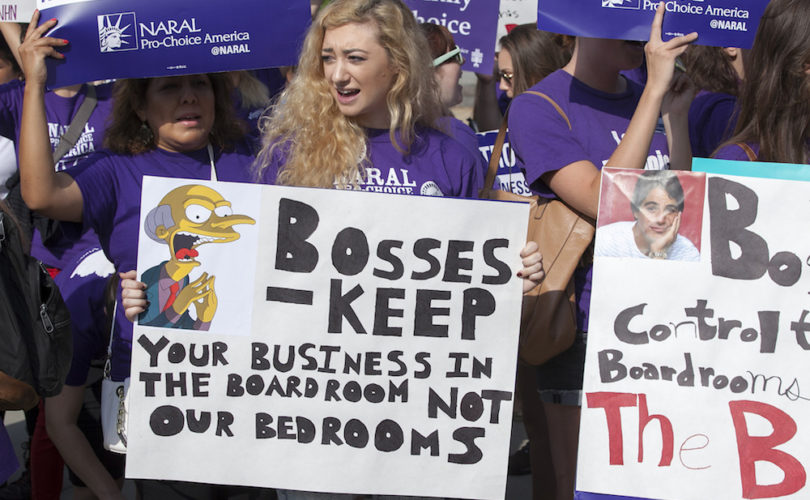 Sixty-five percent of Catholics believe employers should not be allowed to opt out of providing birth control for employees, the Pew Research Center survey finds.

Released Wednesday, the Where the Public Stands on Religious Liberty vs. Nondiscrimination survey was conducted August 16 through September 12 among 4,538 respondents and has a margin of error of plus or minus 2.4 percentage points.

Catholic teaching holds that contraception is wrong because it’s a deliberate violation of the design God built into the human race, also known as natural law. Unnatural birth control also contradicts the symbolic renewal of the marriage covenant.

The controversial issue of government-imposed birth control subsidization has been at the forefront since the Obama administration instituted its HHS Contraception Mandate, which requires employers to cover birth control, including abortifacients, without patient co-payment under the guise of preventive services.

The mandate has been the subject of countless lawsuits from religious institutions and other closely held companies, including the Catholic Church, objecting to its violation of religious freedom.

At the same time, Catholics in the Pew Research survey who favored government forcing companies to provide birth control by a 2-1 margin not only were placing themselves at odds with their own Church, they are fully in line with the culture — being of the world and opposed to the Church — because the numbers in the survey matched those of the general population. The  public approved of government-mandated contraception coverage by employers 67 percent to 30 percent.

Fifty-four percent of Catholics also favored laws requiring businesses to participate in weddings that violate their conscience. Additionally, Catholics agreed by a slight majority (50 percent-47 percent) that biological males should not use women's restrooms.

The apparent rejection of Catholic principles and the failure to recognize the significance of religious liberty demonstrate the need for clear proclamation of Church teaching, noted two observers involved in Catholic-related issues.

“It is a sad commentary on the state of the Church in America that polling shows the majority of self-identified Catholics fail to understand the importance of religious liberty in such concrete cases as forcing employers to pay for contraception or to provide wedding services to homosexuals,” said Dr. Joseph Meaney, Human Life International’s director of outreach and expansion.

Meaney pondered whether the lack of strong religious persecution against Catholics in recent decades has diminished their understanding of what it means to be discriminated against for one's beliefs, pointing out, however, that this kind of discrimination by government bodies is increasing.

The issue has been cleverly and misleadingly framed by liberals, he said, as one of civil or human rights vs. religious bigotry.

“Very few Catholics have a clear understanding that following one's conscience is a fundamental human right and that the proper formation of one's conscience goes far beyond simple feelings as to what is right or wrong,” Meaney stated. “There is such a thing as the tyranny of the majority, and the U.S. founding fathers were very aware of this danger.”

“When you’re talking about health care plans, wedding cakes and restroom facilities, there are a number of nuances that people could be confused about in terms of moral obligations and cooperation with evil,” he said, “though any government infringement on religious freedom should raise some flags.”

Both agreed that more should be done in terms of educating Catholics in their faith.

“The numbers showing tragically low percentages of Catholics believing that use of contraceptives, having an abortion and homosexual behavior are morally wrong are truly concerning as they are obvious mortal sins, and Church teaching is clear on these issues,” Cassandra told LifeSiteNews. “The first concern of any Catholic who sees these numbers should be for the souls of the poll respondents and anyone else who doesn’t agree that all three of these actions are morally wrong.”

“Then we have to ask why these numbers are so dismal,” he continued, citing issues at the parish level and colleges across the country.

“People have to speak out and take action in order to turn things around — in our schools, colleges, and in our parishes,” Cassandra said. “No matter what the opinion polls say, Church teaching cannot change on these issues, so it’s our job — our calling as Christians, in fact — to bring our brothers and sisters around to knowing and accepting the truth and embracing the fullness of faith.”

“Many American Catholics have obviously failed to inculcate some elementary concepts from the Catechism,” Meaney told LifeSiteNews. “As American society becomes ever more secular and even hostile to traditional religious values, a clear priority for the Church must be to educate the faithful about the importance of conscience and that forcing men and women to violate their reasonable religious beliefs is an intolerable human rights abuse in a just political system.”