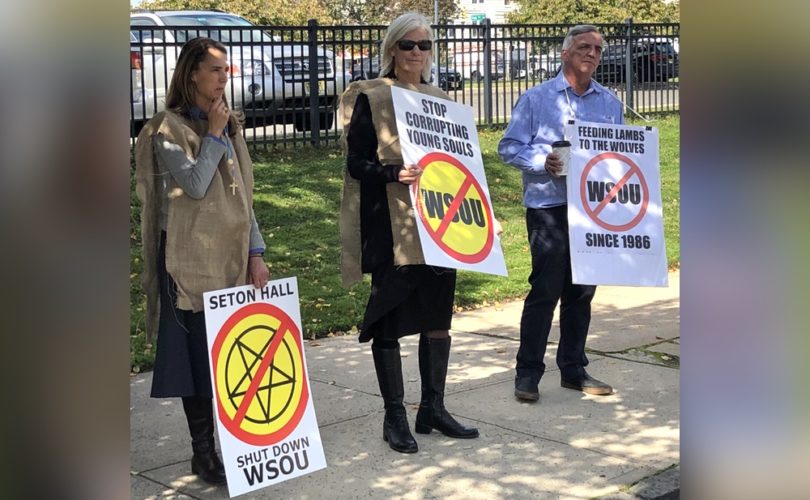 NEW JERSEY, March 26, 2021 (LifeSiteNews) – A Catholic group located in the diocese of New Jersey is trying to shut down the student-run radio station at Seton Hall University—a private Catholic school—after a recent investigation revealed that it has a long history of broadcasting blasphemous and openly satanic heavy-metal music.

Shut Down WSOU has been working tirelessly for months to put an end to the station and its broadcasting of moral pollution in the wake of an investigation in August of 2020 by the Lepanto Institute.

In his investigation, Michael Hichborn found that the radio station airs “bands and songs that are blasphemous, openly satanic, promote sacrilege, promote the murder and mutilation of women and children, and the slaughter of Christians.” A page on Shut Down WSOU’s website also contains evidence [WARNING: link leads to disturbing material] of the filth spewing out from the radio station.

Beginning in September of last year up until a few months ago, the group publicly and peacefully prayed the rosary every Tuesday, both in front of the station and the university campus. One of the organizers of Shut Down WSOU, Maria Woltornist, told LifeSite that her group has “begged, pleaded, petitioned, and prayed on our knees regularly for this evil to be shut down at this so-called Catholic university, Seton Hall, but to no avail.”

The station was founded at Seton Hall University, an official school of the diocese, just over three decades ago. It has withstood two bans and multiple internal reviews by the university over the years. The current archdiocesan leadership of Cardinal Joseph Tobin, who is the chair of both the Board of Regents and the Board of Trustees at Seton Hall, has done nothing to stop Satanism and blasphemy from being spread by the radio station.

The university also operates a seminary, independent from the rest of the school, but still situated in the same area. Woltornist and her group find it hypocritical that Seton Hall professes Catholicism on the one hand and yet continues to operate a public radio station that regularly promotes material contrary to the faith.

“You cannot have a Satanic radio station and think your seminary is highly regarded. The two cannot exist together in peace,” she said.

Woltornist is convinced that the Cardinal could intervene in a meaningful way.

“Cardinal Tobin is at the top and can shut it down,” she said, adding that her group is praying for him and those involved in the matter to “do the right thing.”

She related how Shut Down WSOU has reached out multiple times to the offices of Cardinal Tobin, Joseph Nyre, the president of the university, Mark Maben, the general manager at WSOU, and others with their concerns, but to no avail.

This coming Tuesday, March 30, the group is planning to return once again to their weekly peaceful, public demonstrations with the help of the rosary rally crusaders at Tradition, Family, and Property. The rally is set to begin at 1:00 PM at South Orange Avenue & Centre Street, South Orange, NJ, 07079.

Woltornist hopes that those with the power to make change will see the need for swift action to be taken. She said that Cardinal Tobin “needs to realize that his spiritual children are playing with matches in a basement concerning this Satanic radio station: One spark with paper around, and the whole house comes burning down.”

“We pray people join us in this battle against evil to save souls,” she said.