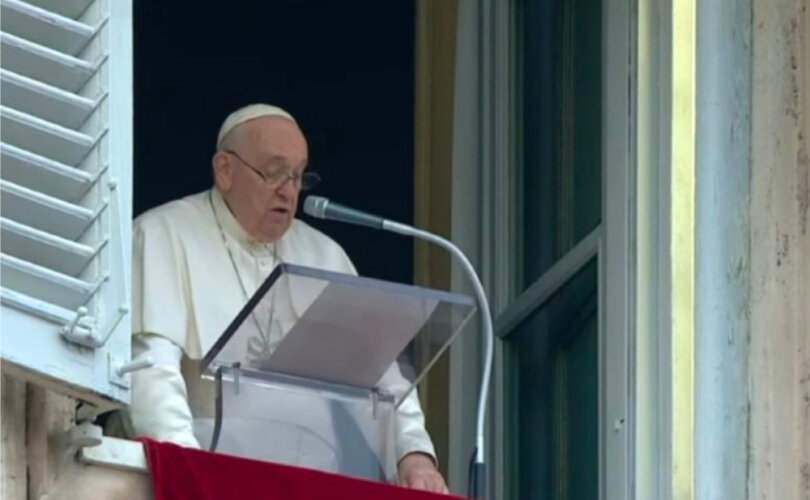 VATICAN CITY (LifeSiteNews) — The next key stage of the Synod on Synodality will be preceded by an “Ecumenical Prayer Vigil,” Pope Francis has announced, which is aimed to further the “path to Christian unity and the path of synodal conversion of the Church.”

Speaking to those assembled in St. Peter’s Square after the Sunday Angelus January 15, Pope Francis announced the ecumenical event which will take place on September 30.

The path to Christian unity and the path of synodal conversion of the Church are linked. Therefore, I take this opportunity to announce that next Saturday, September 30, an Ecumenical Prayer Vigil will take place in St. Peter’s Square, with which we will entrust to God the work of the 16th Ordinary General Assembly of the Synod of Bishops.

For the young people who will come to the Vigil there will be a special program throughout that weekend, curated by the Taizé Community. As of now, I invite brothers and sisters of all Christian denominations to participate in this gathering of the People of God.

In October, the Synod on Synodality’s next stage will take place with the Synod of Bishops meeting at the Vatican, October 4 through 29.

This meeting is the culmination of a nearly year-long process of the Continental Stage, which started with the October release of the working document, intended to guide this part of the Synodal process.

The document highlighted various groups in need of more “welcoming,” including:

Additional calls were made to have more involvement of women in the liturgy, including having access to “ministerial roles.” The document further noted “near universal calls for women in governance, women preachers, and ‘a female diaconate.’”

Bishops around the world are now to draw up their own reflections on that working Document for the Continental Stage of the Synod (DCS). These reflections will themselves be used as the basis of seven continental meetings.

The results of these meetings will be compiled into another working document (or Instrumentum laboris) – finalized by June 2023 – for the Synod of Bishops which will be held at the Vatican this October.

From the very start, the Synod has been marked by its attention to non-Catholics. Despite being billed by the Vatican as a way of “listening to the People of God,” the guiding documents stated that the process must involve “listening” to Catholics, non-practicing Catholics, and non-Catholics.

“No one – no matter their religious affiliation – should be excluded from sharing their perspective and experiences, insofar as they want to help the Church on her synodal journey of seeking what is good and true,” reads the text in a subsequent passage. (Emphasis original.)

Synod pointing to the ‘path to nothingness’

But following Francis’ announcement regarding the ecumenical prayer vigil, Catholics were swift to scorn the notion.

“Not a chance I’m going to pray for unification of all religions and the takedown of traditional Catholicism,” wrote one social media user.

It is hard to believe that a Vatican which hosts some of the greatest and most sublime works of art known to man produced this kitsch. pic.twitter.com/ybkCZhS4BJ

“We are heading down the ‘path to nothingness’,” wrote another. “Pray to see the Vicar of Christ.”

“We must stop this with our protests and our prayers because it’s the formation of the One World Religion,” added another.

Father Ronald Vierling highlighted that “prior to the Second Vatican Council, Catholic ecumenism was understood to be a return to the unity of the Catholic Church.”

After the Council, ecumenism took the form of a Catholic Church supposedly surrendering its unique claims to be the one, true, authoritative Church of Christ, in favor of seeking conciliation with different faith traditions wherein doctrinal differences are a mere nuisance to be set aside.

Orthodox Catholics fear that modification of Catholic doctrine and moral teaching is the actual goal of the upcoming synod, and point to the pope’s words that ‘Christian unity and the synodal conversion of the Church’ point directly to a willingness to change Church teaching—something which would be totally unacceptable by any measure of truth…and the Church’s understanding of its own nature.

Indeed, in his 1888 encyclical Libertas, Pope Leo XIII outlined the Catholic Church’s relation to different religions. Leo XIII firmly warned against any promotion of other religions as somehow on a par with Catholicism:

One thing, however, remains always true — that the liberty which is claimed for all to do all things is not, as We have often said, of itself desirable, inasmuch as it is contrary to reason that error and truth should have equal rights.

Such opposition to the Synod’s process is not without high-ranking support. The late Cardinal George Pell was an outspoken critic of the entire Synodal process, and shortly before he died he wrote a stern condemnation of it.

Published the day after his sudden death, Pell’s article referenced the DCS, calling it “the most incoherent document ever sent out from Rome.” Pell noted that “[t]he document does not urge even the Catholic participants to make disciples of all nations (Matthew 28:16-20), much less to preach the Saviour in season and out of season (2 Timothy 4:2).”

“So far the synodal way has neglected, indeed downgraded the Transcendent, covered up the centrality of Christ with appeals to the Holy Spirit and encouraged resentment, especially among participants,” the late cardinal lamented.