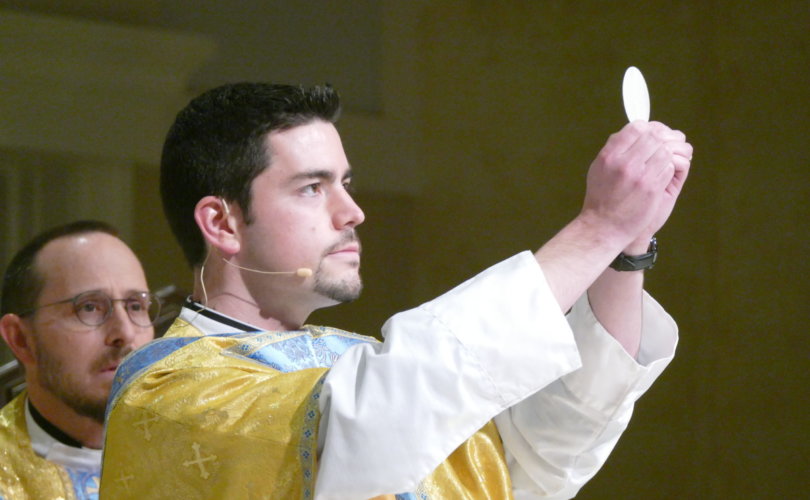 PETITION: Stand with priest who told lesbian 'married' judge to not present herself for Communion. Click here.

EAST GRAND RAPIDS, Michigan, November 28, 2019 (LifeSiteNews) — Hundreds of Catholics from across the Diocese of Grand Rapids attended the 6:30 pm Mass yesterday at St. Stephen’s to show support for Fr. Scott Nolan who received pushback after telling a lesbian “married” judge she should not present herself to receive Holy Communion.

Nolan, 33, had come under intense media scrutiny after a disgruntled parishioner, Sara Smolenski, chief judge of the Kent County District Court in Western Michigan, told a local NBC affiliate that he refused to give her Holy Communion because she is “married” to a woman.

Fr. Nolan had told Smolenski during a private conversation on the phone not to present herself for Communion. This happened after she and other parishioners wore gay pride pins to church recently.

Several people at the Mass last night spoke with LifeSite but on condition that their identity remain anonymous.

“I think Father was in a difficult and delicate situation but he stood firm for what we believe as Catholics,” said one woman in her early 50s. “He showed great humility and great awareness of the situation.”

“This is a total coup. It’s shameful what’s going on,” exclaimed a married man who runs a political podcast online.

“I really liked how the Bishop responded to the situation,” remarked a young man who graduated from nearby Aquinas College. “His statement wasn’t just one-sided and slamming the other. Clearly, Judge Smolenski felt hurt. I think His Excellency showed a good balance of respect and compassion for her and for the truths of our faith. He didn’t give a blanket condemnation. He wanted to reach out.”

Bishop Walkowiak issued a statement yesterday in support of Fr. Nolan’s decision, noting how inclusion and acceptance are hallmarks of the Catholic Church but that “no community of faith can sustain the public contradiction of its beliefs by its own members.”

A deacon from Immaculate Heart of Mary Church assisted Fr. Nolan at Mass, as did two other young priests in the area. The deacon told LifeSite that he supports Nolan’s “defense of our faith’s teachings.”

In an interview with local reporter Barton Deiters yesterday, Nolan explained that he never wants discussions about who receives or doesn’t receive Communion to be public but that he stands by his actions.

The Gospel reading at the Mass was, fittingly enough, Christ telling the apostles they would be handed over to the synagogues and persecuted before kings and governors. Mass-goers chuckled when Fr. began his brief, four-minute-long sermon quasi-joking about how best to preach about the readings. His remarks focused on Mary and how she “kept saying yes” to God. “God calls us not to be successful but to be faithful,” he said. “Whatever else happens” Catholics must do the will of God.