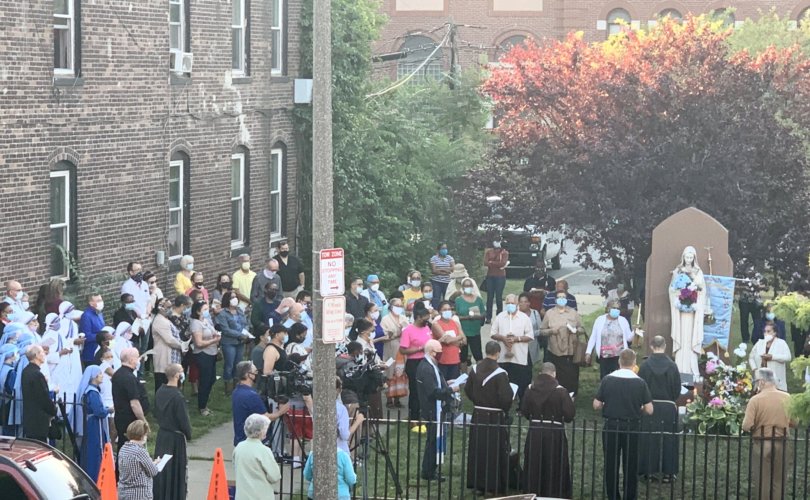 Catholics gather to pray in front of a statue of the Blessed Virgin Mary that was set on fire in Boston.Twitter

BOSTON, Massachusetts, July 16, 2020 (LifeSiteNews) – Dozens of Catholics, including many members of religious orders, attended a prayer vigil in front of a statue of Our Lady that was set on fire in Boston, Massachusetts, last Saturday.

The perpetrator of the act of vandalism has not yet been caught by police. Fr. John Currie, the pastor of the local parish, said during the event, “We’re prayerfully saying to this person or persons: We love you. We forgive you. And we are here to serve and help you in any way you may need. This is why we’re here primarily.”

Currie said the Catholics present were a “shining light of peace, hope and love for our nation, our state, our city, and our neighborhoods during these very troubled, contentious, and challenging times.”

He mentioned several of the traditional titles of Our Lady “fitting for tonight,” including Queen of Peace, Consoler of the Afflicted, Untier of Knots, Mother of Hope, and Mother of Life. “Let us be people of light and love, as our Blessed Mother wants,” Currie concluded.

According to Louis L. Murray Jr., who was present at the vigil, prayers were said “in English, Spanish, Portuguese, and Latin.” The group also prayed the rosary.

In the aftermath of the statue being vandalized on Saturday evening, police officers “spoke with Boston firefighters, who said that an unknown suspect had set fire to plastic flowers, which were in the hands of the statue, causing the face and upper body of the statue to be burned,” local station WCVB reported.

Fr. Currie told WCVB, “I was shocked. (There’s) disappointment, sadness. The image of Our Lady is so important for us and our faith. It’s such a contradiction to her love. Mary would never desecrate anyone, never hurt anyone, only offer them the peace and love of Jesus. I think that’s where it really hits us in our hearts.”

In recent weeks and months, an increasing number of Christian churches have been attacked, vandalized, or set on fire. Just last Friday, another statue of Our Lady, this one in New York, was spray-painted with the word “IDOL.”

On Saturday in Ocala, Florida, a 24-year-old man was arrested and charged with attempted murder for setting fire to Queen of Peace Catholic Church. He drove his car into the church and proceeded to light two gallons of gasoline on fire. Parishioners were inside the church preparing for Mass but were able to flee without injury.

After his arrest, he told police that he “knew what he was doing. Shields added even though he knew it was wrong, he planned to do it anyway. He purchased the gasoline (to set the church on fire) Saturday morning.”

In late June, 30-year-old Anthony Weimer pulled down a statue of the Ten Commandments outside Flathead County Courthouse in northeastern Montana.

“The Kalispell Police Department said calls came in on Saturday that a male was on the Flathead County Courthouse grounds, and appeared to be wrapping a chain around the Ten Commandments monument,” reported the local NBC station. “Officials say those callers saw the man attach the chain to a pickup truck, and then pull the monument into the street. Police say the man reportedly removed the chain, then got into the truck and left the scene.”

The officers were later able to find the truck used to tear down the statue, and then arrested the subject, who now faces a felony charge of criminal mischief.

Also in June, rioters affiliated with the Black Lives Matter movement pulled down and desecrated statues of St. Junipero Serra in San Francisco and Los Angeles, after local authorities in Los Angeles approved the removal of another of his statues outside Ventura City Hall.

In St. Louis, Father Stephen Schumacher preached to hundreds of angry protestors while defending a statue of St. Louis in the city named after the sainted king on a day when Catholic laity praying at the statue were physically attacked by rioters.

The Archdiocese of St. Louis published a statement that insisted that St. Louis represented peace and respect for one’s neighbor.

“The history of the statue of St. Louis, the King is one founded in piety and reverence before God, and for non-believers, respect for one’s neighbor. The reforms that St. Louis implemented in French government focused on impartial justice, protecting the rights of his subjects, steep penalties for royal officials abusing power, and a series of initiatives to help the poor,” the archdiocese said.

“King Louis IX’s renowned work in charity helped elevate him to sainthood. His daily suppers were shared with numerous beggars, whom he invited to the royal table. On many evenings, he would not let them leave before he washed their feet. He personally paid to feed more than 100 poor Parisians every day. His care for the sick was equally moving; St. Louis frequently ministered to lepers. He also created a number of hospitals, including one for the blind and another for ex-prostitutes,” the statement continued.

In North Carolina’s Harnett County, a small-town Protestant church “was vandalized with a swastika, an anarchy symbol, anti-gay messages and one reference to Black Lives Matter,” reported WRAL. “It certainly looks like a hate crime,” the local sheriff said. “We don't have any surveillance.”