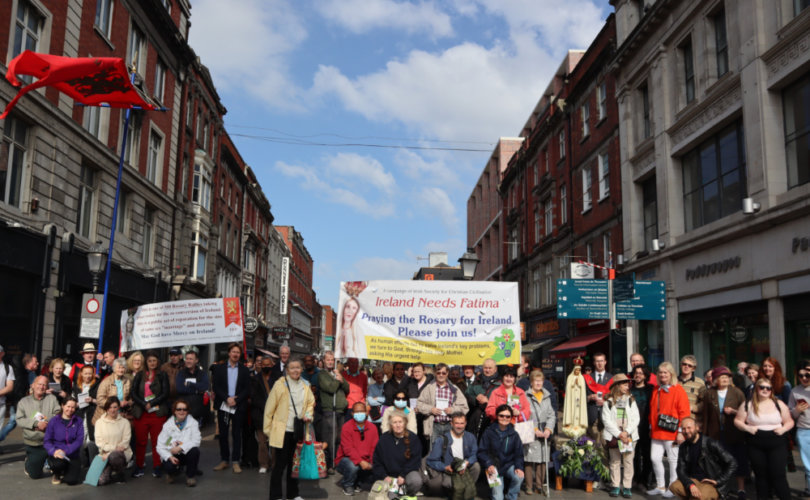 Rosary rally in Dublin, May 14, 2022Irish Society for Christian Civilisation

DUBLIN, Ireland (LifeSiteNews) – Thousands of Irish Catholics celebrated the 105th anniversary of the apparitions of Our Lady of Fatima by holding 515 Public Rosary Rallies on May 14. The rallies represented one of the many, widespread public manifestations of the Catholic Faith in Ireland held in recent years.

The Irish Society for Christian Civilisation (ISFCC) and its Ireland Needs Fatima campaign organised the rosary rallies as a fitting way to commemorate Our Lady’s call to challenge the culture and resist the waves of sin and aberrations rocking the nation. The effort has captured the imagination of many and the number of rallies is growing quickly.

To put the event in context, 515 Rosary rallies mean nearly one million Hail Marys prayed in the public square! Just about every nook and cranny of Ireland was reached. These rallies are 515 more reasons for the devil to shake in his shackles in fear of Our Lady!

“One person described it as a tsunami of graces for Ireland, and it really was,” said Rosary Rally captain Gregory Murphy. “I’m sure that God will bless Ireland, despite the nation’s sins and shortcomings, after having so many Rosary Rallies in honour of His Mother.”

“You can see the joy and happiness in the faces of the attendees,” he added. “You also have to remember that this was the first time many of these people publicly expressed their Faith.”

“It’s a great honour for me to be a rosary rally captain for Our Lady of Fatima,” commented one rally caption. “It’s lovely to pray privately, but we need more public prayer to let them see [that] religion and God and faith won’t be stamped off the face of the earth. In Ireland, we will shout from the gallows, ‘Ireland belongs to God and Our Lady’.”

“When you called on the phone, I asked Our Lady ‘Why did you pick me? I’m not worthy for this’,” one devout man reported. “Then I thought, Our Lady is calling us to do stuff like this. This is the first time I have ever done anything like this, but I really felt called to do [it].”

“More and more people are looking to the Fatima message because it offers a sure remedy to the moral crisis in society,” Gregory Murphy continued. “In other words, prayer, penance and conversion are the answer to a world that has abandoned God.”