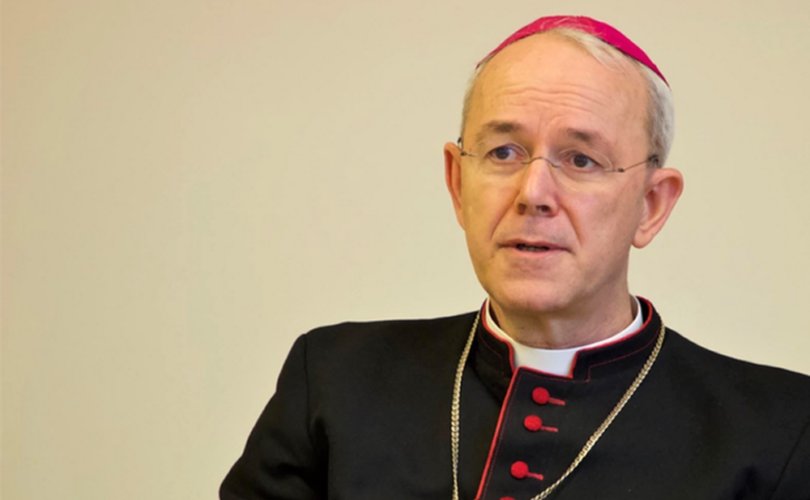 WEIRTON, West Virginia, November 8, 2018 (LifeSiteNews) – A bishop famous for his defence of perennial Catholic teaching urged faithful Catholics to be “willing to die” for their faith rather than compromise in the face of new “paradigm” shifts and other “ruptures” being forced upon the Church from the top down.

Bishop Athanasius Schneider, the auxiliary bishop of Astana, Kazakhstan, gave a prerecorded video presentation about the faith for the 2018 Catholic Identity Conference in Weirton, WV, last week because he could not attend himself.

Although the lecture consisted mainly of salient passages from other Catholic apologists, Schneider introduced them with his own hard-hitting defence of the faith.

“I would like to encourage you to be proud of our Catholic faith which is the most precious and the most beautiful gift which God has granted us,” he told his hearers.

“The Catholic faith is indeed not the private property of the pastor of a parish, nor of the bishop of a diocese, and not even of a pope,” Schneider asserted.

“The Catholic faith is greater. It precedes and it transcends the pastors of the Church because they also are the first ones who have to obey the faith–exemplarily.”

Schneider added that pastors must transmit the faith in its entirety to the faithful and pointed out that it belongs to the whole Church.

“The Catholic faith belongs to all times, to all places, and to all generations of Catholics, starting with the Apostles and going through all the Fathers, the Doctors of the Church, and all the saints we know,” he affirmed.

“The Catholic faith cannot admit a change, or a rupture, or a reinterpretation into another signification than it has been constantly believed and taught throughout 2000 years,” Schneider said.

He observed, however, that such changes and ruptures are being attempted in our times.

“Nowadays we can [see] the introduction of some changes and ruptures in the presentation of the truths regarding doctrine and morals,” he said. He took aim at what he sees as attempts to hide this attempt:

“To hide and to mask such changes, there are used such seductive expressions as ‘paradigm shift’ or ‘hermeneutic of continuity,’ even when the obvious sense of the changes contradicts the constant belief and the constant practise of the Church,” Schneider stated.

“Our paradigm is Christ–the same yesterday, today and forever. There is no shift of paradigm,” he continued.

The bishop then told his hearers what they should say to such attempts to sneak changes into the faith.

“In such situations, you should say ‘I know my Catholic faith. I will not permit [myself] to be confused by whomever. For the sake of this faith, I am willing to die’,” he advised.

It was Vatican's Secretary of State Pietro Cardinal Parolin who coined the phrase “new paradigm” earlier this year while defending Pope Francis’ teaching on marriage and the family found in his 2016 controversial exhortation Amoris Laetitia.

Schneider said that the Church must fulfill her primary mission of proclaiming the truth, bearing in mind that she will always be persecuted because of this. He then told his audience that he hoped the passages he had chosen to read  from the works of Catholic apologists would give them “strength, joy and love for our immutable Catholic faith.”

The apologists from whose works Schneider took the material for the rest of his thought were Blessed John Henry Newman of England, Hilaire Belloc of France and England, Juan Donoso Cortes of Spain, and Pope Pius X.

To hear Bishop Schneider’s talk in its entirety, subscribe to the Catholic Identity Conference’s library here.