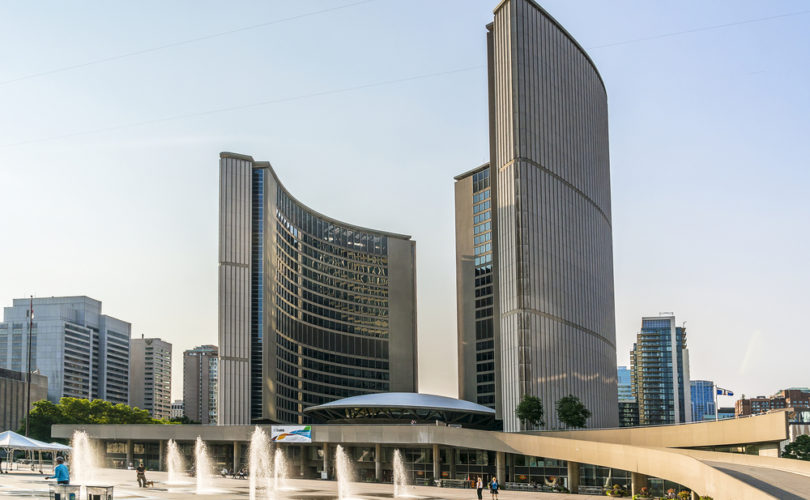 Kennedy and Toronto Catholic school board chair Mike Del Grande are backed up by their board, which released a statement April 2 objecting to the city’s “discriminatory treatment” of Kennedy. “Ms. Kennedy has been unfairly vilified for her personal views on matters relating to her position as an elected Catholic Trustee, which in our opinion is a flagrant violation of her religious freedoms,” Del Grande stated in the release.

Kennedy told LifeSiteNews that news of her selection – the first time in 13 years a Catholic trustee had been appointed to fill the single school board seat on the 13-member public health board – was leaked to the media “a couple of days ago.”

Councilor Joe Mihevc, chair of the public health board, then took the “unprecedented” step of introducing a motion Monday night to replace her with public school trustee Chris Glover, she said.

Kennedy is staunchly pro-life, opposed to so-called “gay-straight alliances,” and has voted against using the schools to disseminate the HPV vaccination.

Mihevc repeated similar analogies to the Toronto Sun’s Don Peat April 1, when he dismissed the charges of anti-Catholicism. “You should not be chosen for the library board if you are opposed to the library system,” Mihevc, who said he’s Catholic, told Peat. “You should not be on the committee of adjustment if you can’t support the mandate of committee of adjustment which is minor variances, if you’re going to oppose everything.”

Mihevc’s office told LifeSiteNews that the councilor was busy all day and tomorrow as well, and would not be available to comment.

“I knew this was coming, I could have written the script,” Del Grande told LifeSiteNews. “Catholics need not apply. This is discrimination at its best.”  Catholics make up 33 percent of Toronto’s population, but when it comes to a seat at the table or representation on council, “we’re no different from the Jews, the blacks, or the Irish,” he said. “This city mouths one thing and does another.”

Del Grande found it particularly disturbing that Mihevc, who “claims to be a Catholic” was the one who “led the charge” against Kennedy.

“I’m pretty disappointed,” Kennedy told LifeSiteNews. “I feel like my religious freedom, my freedom of speech, my freedom of conscience, my freedom of religion to hold the views that I believe in, they have been violated.”

She is discussing options to appeal the decision with her lawyer, Kennedy added, and is considering filing a complaint with the city’s integrity commissioner, and the human rights commission.

Kennedy, who has been a registered nurse for 45 years, said that the appointment committee selected her after “a rigorous application process and an interview and an appointment from my board.”

In the board’s press release, Kennedy stated that, “for nearly half a century, I have been providing residents of this great and diverse city with quality healthcare without prejudice or discrimination on the basis of their religious beliefs, sexual orientation or political affiliation – And I expected to receive the same treatment.”

City hall has ignored its own process by voting her out, she told LifeSiteNews. “Their own selection committee nominated me, now they’ve turned around and said, you can’t have a position on the board of health.”

Joe Cressy, Paula Fletcher, and Gord Perks were among councilors who voted against Kennedy on March 31. “These are actually human rights issues, the right for gays and lesbians to lead an equal life in the city of Toronto,” Fletcher said, according to the Toronto Star.

Perks objected that Kennedy was unsuitable, because the city health board delivers certain programs such as encouraging safer sex. The motion was about “whether or not we are prepared to appoint people who support the legal mandate of the entity they are being appointed to,” he was quoted as saying in the Star.

Mayor John Tory supported Kennedy’s appointment, but made it clear he disagreed with her views. “If we started applying every test based on whether we disagree with somebody’s views on people we appoint to things . . . it’s sure going to change the nature of this place,” he said.

Jonathan Goldsbie of NOW Magazine tweeted that Paula Fletcher “touches on Kennedy’s opposition to HPV vaccine: ‘This is a vaccine Campaign Life doesn’t like because it’s about HAVING SEX!’”  He also tweeted: “Here’s Kennedy’s voting record, from which [Counselor Joe] Cressy was reading” and referred to Campaign Life Coalition’s website.

Campaign Life Coalition’s Jack Fonseca said, “The opposition to Angela’s appointment, seemingly spearheaded by Councilor Mihevc, is clearly rooted in anti-Christian bigotry. He opposes her appointment because he doesn’t like her Catholic religious beliefs. That’s discrimination under the Ontario Human Rights Code.”

Toronto’s board of health consists of six councilors, six citizens and one school board representative. Del Grande, formerly a city councilor for Scarborough-Agincourt, said that school board seat used to alternate between Catholic and public school boards each year. “When public health wants to come in to our schools, and we are one third of the population, do you not think we should have any voice?”

Del Grande had written to the appointment committee on Kennedy’s behalf, pointing out that “ongoing lack of representation” from Catholics on the Board of Health “is an enormous disservice to this large constituency,” according to the City Centre Mirror.

“Angela Kennedy wouldn’t be enough to overtake the board of health,” he told LifeSiteNews, “but she would bring to the table a different lens. She’s a nurse, she’s a woman, and yes, she’s a practicing Catholic.” Toronto’s motto, he added, is “diversity is our strength.”

Both Kennedy and Del Grande noted that the nomination process is usually conducted in private. After Kennedy’s selection was leaked to the media, she was questioned by a reporter about her views on abortion and gay-straight alliances, and asked if she is “homophobic,” she told LifeSiteNews.

Del Grande, formerly Toronto’s budget chief and a three-term councilor, said that the city “made a grave, grave error” by disclosing Kennedy’s name before the appointment was announced. “I was there 11 years, when we dealt with these things in private.”

“Angela’s name should not have been in the public domain, this is a private item in private session,” he added. “Not only was she turned down but she was put out for public execution.”

CLC’s Fonseca urged “fair-minded Torontonians who believe that employment discrimination on the basis of religion is wrong” to contact their councilor and “demand they allow Angela’s appointment to continue.”