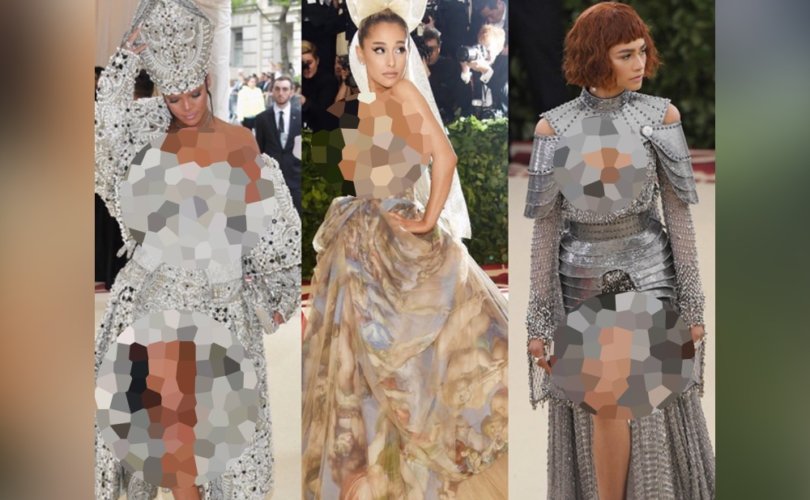 These images of what some celebrities wore to the 2018 Met Gala in New York have been pixelated. Twitter

NEW YORK, May 8, 2018 (LifeSiteNews) – A New York gallery displayed sacrilegious renditions of the Blessed Mother, the Vicar of Christ and included other assorted blasphemous images in a so-called Catholic-themed fashion exhibit that included some 40 liturgical vestments from the Sistine Chapel sacristy on loan from the Vatican.

'Heavenly Bodies: Fashion and the Catholic Imagination,' was the theme of this year’s annual fundraising gala for New York’s Metropolitan Museum of Art, and also the theme for the Met’s largest exhibition to date.

Many Catholics, however, saw the Met Gala event as “blasphemy.”

“A leather bondage mask draped in rosary beads, a jeweled bustier with its gems strategically placed and a fuchsia gown inspired by cardinals’ robes — with a neckline that left its mannequin’s breasts mostly exposed — were all part of the Catholic-themed fashion exhibit at the Met Gala,” PageSix.com reports.

Innumerable photos chronicling scandalously dressed celebrities at the gala have saturated social and other media since the gala, followed by endless commentary from all quarters and some pushback from offended Catholics and others.

“My religion is NOT your damn #MetGala outfit! #blasphemy,” one tweet captured in a Yahoo News report said.

My religion is NOT your damn #MetGala outfit! #blasphemy pic.twitter.com/CjJOiCCNj2

The report detailed some of the various get-ups at the event, including pop music performer Rihanna in a pope-themed outfit that included a strapless, groin-high jeweled dress, oversized cape and  matching miter.

Father Richard Heilman, priest for the Madison, WI, diocese and author of RomanCatholicMan.com, shared a photo of the vocalist in a Facebook post.

He noted with a tinge of humor the irony of celebrities and the fashion world commandeering the Catholic Church in such a manner on the heels of a high school student recently being excoriated on social media for her choice of a traditional Chinese dress for prom.

“PONTIFICAL APPROPRIATION,” Father Heilman’s post stated. “My … how they hate Catholics … ahem … I meant, “Strong Catholics.” Good thing it wasn't a dress from China, because …..”

“It’s a shame that the Metropolitan Museum had to stoop so low just to raise funds for its Museum of Arts Costume Institute,” Susan Brinkmann wrote for Women of Grace. “With tickets running in the $30,000 a piece range, surely they can come up with enough money to fund their annual needs without disparaging the world’s largest religion with this crass display.”

Brinkmann pointed it was both the contents of the collection and the celebrities’ outfits that were offensive.

“Let’s get real,” Brinkmann said. “This show wasn’t about fashion – it was about a bunch of elites with very bad taste.”

“finding the met gala to be highly offensive heresy,” one tweet said, “wby … the bourgeoisie appropriating religious iconography is not acceptable and you wouldn't think it was if it were any religion bar Christianity…”

“The met gala theme is lowkey disrespectful to the catholic religion let’s be real,” another said, and a third stated, “Imagine using my religion to do your fashion show … disgusting!”

“I'm not even Catholic and find it offensive,” offered another. “It is a demonstration against Christians as a whole.”

The controversy has also garnered coverage from Fox News, its report saying the theme was meant to be controversial, “However, some stars may have taken the theme a bit too far into the land of bad taste.”

The cardinal was there

New York’s Cardinal Archbishop Timothy Dolan attended the event and a preview press conference earlier in the day. While Dolan chose not to walk the red carpet into the Gala, instead going in the side door, he still made headlines with his presence there.

Dolan said in his remarks at the press preview he had reservations about attending the gala, Crux reports, continuing with an explanation.

He may have chosen not to walk the red carpet, but according to these headlines, @CardinalDolan proved to be the star of last night’s #MetGala. #CruxAtTheMet pic.twitter.com/Cw5o0mX35g

“In the Catholic imagination, the truth, goodness, and beauty of God is reflected all over the place, even in fashion,” he said. “The world is shot through with his glory and his presence. That’s why I’m here. That’s why the Church is here.”

Dolan has defended his involvement with events and public figures associated with opposition to Church teaching in the past – such as acting as Grand Marshall of the New York Saint Patrick Day Parade the year after it changed its policy to admit expressly gay groups march. He also invited Barack Obama to the New York Catholic Charities Al Smith fundraising dinner despite Obama’s vociferous support for abortion and homosexuality – with the explanation that his participation was a form of engaging those opposed to the Church’s teaching and his doing so did not compromise Church principles.

Seeming to continue in this vein, he told Met gala press preview attendees the exhibition was “radiant,” and spoke of the pursuit of the true, the good and the beautiful as motivation for Catholic life.

“That’s why we have great schools and universities that teach the truth,” Dolan said. “That’s why we love and serve the poor to do good, and that’s why we’re into things such as art, poetry, and music, literature, and yes, even fashion, to thank God for the gift of beauty.”

The show includes an exhibition of women's dresses modeled after clerical clothing worn by priests and bishops. It also includes a dress showcasing a naked Adam and Eve that has a revealing transparent top.

It also includes a woman's dress modeled after a nun's religious habit, with a mock rosary as part of the design.

‘I love that you got dressed up as a sexy priest.’

Dolan chatted with Jesuit Father James Martin, Donatella Versace, an event sponsor, and others at the preview gathering.

Martin was involved in the Met’s pre-exhibit consultations, according to the New York Times. He called the exhibit “stunning,” and tweeted regarding flip comments he received at the gala, including, “I love your costume,” and “I love that you got dressed up as a sexy priest.”

Actually said to me at the #MetGala tonight:
“I love your costume.”
“Is that, like, for real?”
“Funky outfit!”
“You're the best dressed dude here, bro.” (High fives me.)
“You look just like the real thing.”
And, truly: “I love that you got dressed up as a sexy priest.”

The USCCB tweeted about the gala with two quotes from Pope Francis’ recent exhortation On the Call to Holiness in Today’s World, one referencing holiness, the other including mention of God making His final work of art “with the scraps of human frailty.”

Crux’s coverage of the gala and exhibition has been glowing.

“Perhaps the last thing the fashion reporters and enthusiasts expected at the Met’s landmark exhibit on faith and fashion was an introduction to Jesus Christ,” one report said, “but that’s what they got.”

Another said that for “some star-studded attendees” who were raised Catholic, “the event was more of a homecoming.”

Both comedian Jimmy Fallon and actor George Clooney invoked their pasts as an altar boy for that report, Fallon saying it helped him catch the acting bug.

“You’re kind of on stage a little bit when you’re performing as an altar boy, ringing the bells, and my parents would come see me,” Fallon said. “I’m there doing 6:30 am Mass. It’s almost like a show, it’s very theatrical.”

“You know I was an altar boy,” George Clooney told Crux. “I was a good Catholic boy, and I know about the Catholic Church.”

“Not everyone got it,” another Crux article said, referencing the curator’s claim the exhibit was about building a bridge between culture and faith. “But many, gasping in awe before the creative power of the Catholic narrative, did.”

The Met gala is the fashion world’s equivalent of the Oscars or Super Bowl, according to Vogue, an evening when designers, models, and Hollywood stars assemble in “the year’s most over-the-top looks.”

The Met explained its rationale for the exhibit on its website:

The thematic exhibition features a dialogue between fashion and masterworks of medieval art in The Met collection to examine fashion’s ongoing engagement with the devotional practices and traditions of Catholicism. A group of papal robes and accessories from the Vatican serves as the cornerstone of the exhibition, highlighting the enduring influence of liturgical vestments on designers.

The exhibition was made possible by Christine and Stephen A. Schwarzman, and Versace, the website information said.

“40 ecclesiastical masterworks from the Sistine Chapel sacristy, many of which have never been seen outside the Vatican,” according to the Met, “Encompassing more than 15 papacies from the 18th to the early 21st century …”

The loan of the Sistine Chapel vestments came with authorization from senior Vatican officials.

The 'Heavenly Bodies: Fashion and the Catholic Imagination' exhibition opens to the public Thursday and is slated to run through October.