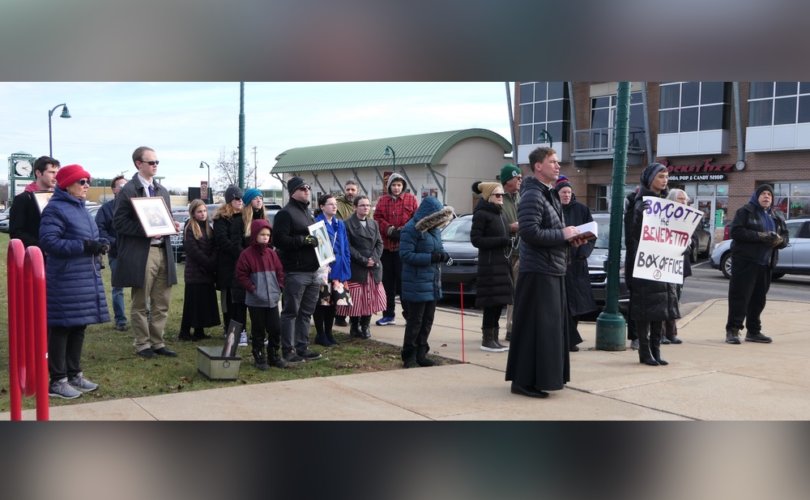 Benedetta is directed by 83-year-old anti-Catholic Dutch filmmaker Paul Verhoeven. It’s based on the life of a disturbed 17th century Italian nun named Benedetta Carlini. Carlini allegedly had religious “visions” and claimed to have the stigmata of Christ. She was eventually named head of her convent and engaged in impure acts with a younger nun. Though she escaped the death penalty for her deception, Carlini was forced to live in the convent until her death 35 years later in 1661.

Verhoeven’s film mixes and matches truth and falsehood and includes lewd scenes between two female actors. The movie has been heavily criticized not only by French media outlets but by lay Catholics too. The American Society for the Defense of Tradition, Family and Property (TFP) has been holding prayerful protests outside movie theaters showing the picture in the United States. Some of the protesters have been heckled.

Meredith Burl, a homeschooling mother of four who lives in Western Michigan, organized the protest in Grand Rapids. She told LifeSiteNews the theatre’s owners should not release the film.

“In the next few years, we’re going to see movies on pedophilia and all sorts of vile and offensive topics. We’re on a slippery slope now and it’s only going to get worse,” she said. “The Loeks family, who own Celebration Cinema, needs to put an end to this. They should also think about their own judgement before God. They’ll be held accountable for this sacrilegious movie that offends not just God but the Blessed Virgin Mary.”

Most of the Catholics who went to the protest Saturday attend St. Margaret Mary’s church in the nearby town of Allendale. Fr. David Gillilan, the pastor at the chapel — which is owned by the traditionalist Society of St. Pius X — led the group in praying fifteen decades of the rosary. He told LifeSiteNews it’s important for Catholics to defend the honor of God in these times.

“We have to get out, at times in public, if we know there’s something wrong going on in our community, in this case blasphemy. It’s our duty as Catholics to stand up for our faith, especially for the glory of Mary and to defend the honor of God. It’s even more significant to do this during the season of Advent, when we’re preparing ourselves — and the world — for the coming of Christ.”

The protestors enjoyed a relatively peaceful experience Saturday, with only occasional instances of opposition. One man in his 20s shouted “I love abortion!” as he drove through the busy intersection where the protestors prayed. Another motorist yelled, “it’s okay to be gay” as Gillilan gave his blessing at the end of the protest. Five minutes later, two young women who work at a soup store near the theatre silently held up a sign across the street that read “I love gays.” Gillilan calmly approached the women and engaged in a brief conversation. Complaints of “judgmentalism” and “bad person” could be heard coming from one of them.

Emily Loeks, director of community affairs for Celebration Cinema, spoke with LifeSite via telephone. She defended the decision to show Bendetta.

“Yes, it’s controversial. It’s also a film that has received critical reviews that are very positive. And there are some disturbing elements to it. So, I’m sympathetic to people who are trying to discern whether that’s an appropriate film for them.”

“Our company has been in operation for 75 years and we have a 75-year history of not censoring film,” she continued. “When you go down that rabbit hole, it becomes super difficult for us to maintain our relationships with film distributors … we don’t frequently get to see films ahead of their arrival in the theater … we essentially allow the community to vote on whether they’re going see a movie or not attend it.”

LifeSite asked Loeks if Celebration Cinema is putting profit ahead of truth and if it has a moral obligation to prevent indecent films that may lead people away from God from being released. LifeSite reminded Loeks of Matthew 18:6, which warns about scandalizing followers of Christ.

“I am a person of faith. I think that some of the stories that I’ve been most challenged by are ones that sometimes do present critiques … I don’t see that our role is one of censorship. Individuals really should … make a decision about whether there is something that is valuable [in a film] to be wrestled with … and that may be different for different audiences.”

Burl re-iterated to LifeSite at the rally Saturday her belief that Celebration Cinema is perpetuating anti-Catholicism.

“They would never release a film like this if it were about Jews or Muslims. Only Catholics are targeted.”

A blasphemous French film exploits the tragedy of a 17th century fake mystic, and the media loves it