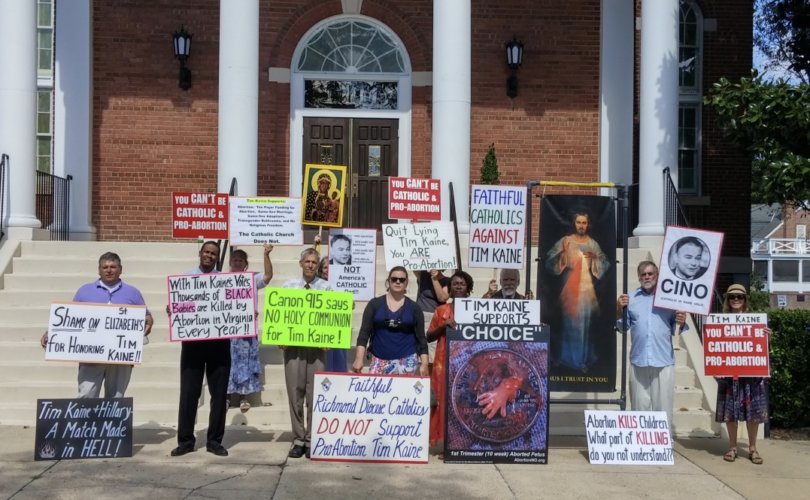 “I know that he's definitely against capital punishment and works to help defend those who are on death row,” Arsenault said. “The church has a teaching with regard to we're pro-life, and we believe in that seamless garment of life. We respect sometimes lawmakers make difficult decisions.” Arsenault was commenting on how as governor of Virginia, Kaine oversaw several executions. The priest told NPR that he thought the issues most important to Kaine were women’s pay and “social justice issues.”

Frances Bouton, one of the event’s organizers, told LifeSiteNews that the protest didn’t disrupt Mass and the pro-life activists felt St. Elizabeth’s was an appropriate venue to protest given it was where Kaine was praised so heavily after becoming the Democratic vice presidential candidate. She said the protestors waited until the 9 a.m. Mass had begun and latecomers had arrived before setting up outside the church.

Most of the people at the Mass saw the anti-Kaine signs outside St. Elizabeth’s when Mass was over, Bouton said, but none of them spoke to the protestors.

“We understand that the priest had told his parishioners … not to talk to the media. We don’t know whether that also included … us,” she said.

“There were some people who stood at the top of the stairs and spent time reading our signs” after Mass, Bouton said. “Some of them took a long time to read the signs.”

The protestors’ message to St. Elizabeth’s was “by honoring Tim Kaine you are supporting all that he supports,” Bouton said.

Kaine touts his Catholic faith and Jesuit education but supports abortion and same-sex “marriage.” As governor of Virginia, Kaine opposed partial-birth abortion and authorized the state’s “Choose Life” license plate option. Nevertheless, “I don't think ultimately we ought to be criminalizing abortion,” he said at the time, and maintained his support for abortion as governor.

But once he became a U.S. Senator, the role of Kaine’s “personally pro-life” views in his politics became nonexistent.

Kaine said he has become “comfortable with the notion that I can have my personal views but I'm going to support the president of the United States — and I will.”

“In this Jubilee Year of Mercy, Catholics and people of good will are called to perform acts of mercy,” the protestors said in a press release. “In the Catholic Church, we are given specific corporal and spiritual works of mercy — seven of each.  The corporal works include feeding the hungry, clothing the naked, visiting the sick and burying the dead.  But it is two spiritual works of mercy [that] we hope to perform in front of St. Elizabeth’s Church — admonishing the sinner and instructing the ignorant.”

There are a lot of “low-information Catholics” who “just haven’t been [properly] catechized,” Bouton said, and when “they don’t see bishops” calling out pro-abortion politicians, they are led to believe one can separate faith and public actions as a politician. “In this particular circumstance,” it’s a scandal that Kaine’s priest is praising him, Bouton said, and this can lead to further confusion.

Richmond Bishop Francis X. DiLorenzo has said Catholics have a duty to determine their worthiness to receive Holy Communion “through an upright and informed conscience.” He has not ordered priests in his diocese to stop admitting Kaine to Holy Communion.

Canon 915 of the Catholic Church’s Code of Canon Law instructs that those “persevering in manifest grave sin are not to be admitted to Holy Communion.”

“No parishioners talked to us … a few took pictures,” Egger said. “And when Fr. Arsenault was asked a question on his way past us to the rectory, he wouldn’t even look up at us.”