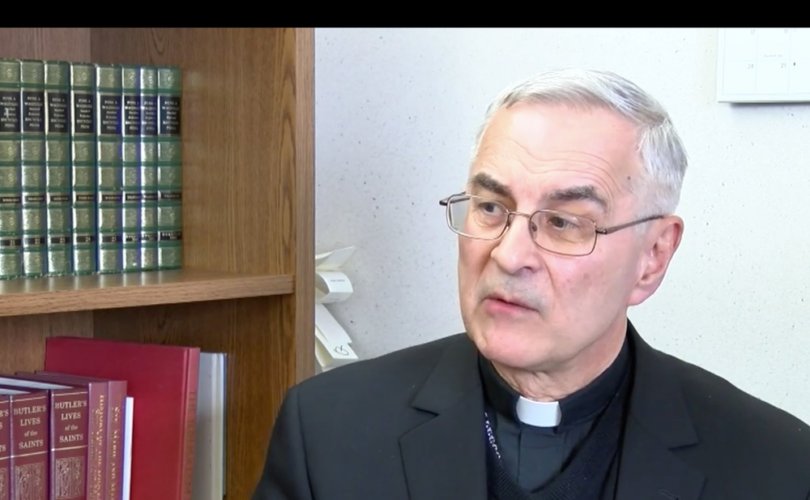 MICHIGAN, March 8, 2019 (LifeSiteNews) – Lay Catholics are demanding that Bishop Steven Raica of Gaylord, Michigan, reinstate a young traditionally-minded priest who was put on leave and who had his priestly faculties suspended shortly after he filed a sexual harassment complaint with the diocese against the highest official in the diocese, Vicar General Fr. Dennis Stilwell.

In a press release from the newly-formed Gaylord Diocesan Watch, the leader of the lay group, Dr. Richard Brenz declared: “A grave injustice has been inflicted by Bishop Raica against Fr. Matthew Cowan, a 33-year-old priest.” In interviews with LifeSiteNews, Brenz and supporters said that they and other Catholics are concerned over a lack of apparent transparency in the bishop’s treatment of Fr. Cowan.

In a Feb. 27 interview with UpNorthLive, however, Bishop Raica denied that Fr. Cowan was put on leave because he filed the complaint.

“Well, first of all, he was not removed for that particular reason. He was removed for other reasons,” the bishop said, without stating what the reason were.

He said that the matter of Fr. Cowan’s complaint is still to be investigated.

“The process is underway. It is nearing completion. We hope to have a response soon. I’m waiting to hear from the review board as to what their findings are so that we might be able to move that forward in a timely way,” he said.

According to Gaylord Diocesan Watch, the unidentified members of the diocesan review board examined the case on Feb. 17.

Bishop Raica told a full house at St. Francis Xavier parish on January 15, reported Gaylord Diocesan Watch, that he had not spoken to Fr. Cowan before suspending him on January 7. Dr. Martin Dubrovec told LifeSiteNews that the bishop could not cite the canon law that Fr. Cowan had allegedly violated in order to merit suspension. The group’s website says that Bishop Raica and his subordinates “have terribly mishandled the investigation into the allegations and violated the rules of the diocese they are supposed to follow.”

According to Gaylord Diocesan Watch, Bishop Raica said that Fr. Cowan’s complaints have been referred to a local prosecutor. The group says it is “respectfully following the advice of Bishop Raica himself,” who told his flock in 2018: “Call us out when our behaviors or words do not correspond with the heart of Christ;…if you see suspicious activities by priests, religious, lay leaders or volunteers …”

Fr. Cowan was assigned to St. Francis Xavier parish in Petoskey in northern Michigan in 2015. It was there that he alleges that Fr. Stillwell exhibited a pattern of unsolicited touching. Fr. Cowan filed a complaint in August 2018.

Reacting to the lay group’s early February press conference, the Diocese of Gaylord admitted that Fr. Cowan had presented an allegation of “sexual misconduct” against Fr. Stillwell. The diocese said that these allegations did not involve a minor. The complaint was reported to civil authorities, the statement said, before the diocese began “an independent and methodical investigation “ of the allegations. The lay Diocesan Review Board dismissed the allegations, according to the diocese' statement. However, after receiving further information from Fr. Cowan, the investigation was reopened.

After months of investigation, Bishop Raica placed Fr. Cowan on administrative leave and his faculties for public ministry were withdrawn.

“Bishop Raica’s decision was NOT based on Fr. Cowan’s allegations,” the diocese' statement read, but involves “a private and confidential issue between a bishop and one of his priests.” It went on to say that the bishop remains “committed to continuing our efforts to prevent sexual abuse of any person by those representing the Church…”

The diocese said it will make no further statement about the matter.

According to the lay Catholic group in Gaylord, Fr. Cowan shared a number of emails in which he related his experiences with the elderly Fr. Stillwell. The group quoted one of Fr. Cowan’s emails:  “After the news of the homosexual misconduct by ex-Cardinal Theodore McCarrick in June of this year, followed by the release of the Pennsylvania Grand Jury Report in August of 2018, I realized that what happened to me by Fr. Stilwell was no longer an isolated incident or outlier in the Catholic Church. I then decided at the end of August to file a sexual misconduct allegation with the Diocese, asking them simply to deem the following to be credible or not.”

Fr. Cowan wrote: “Cardinal McCarrick's response to harassment allegations being 'I don’t recall that.' That's exactly what Denny [Fr. Stilwell] told me when I confronted him.”

After his complaint to the diocese in August 2018, and later filing hand-written notes in a letter to the diocesan attorney Rob Westerman with more explicit details than in the original complaint, Fr. Cowan concluded that his allegations were not taken seriously by the diocese. He wrote on December 19, “I’ve come to the unfortunate conclusion that the Diocese of Gaylord is not taking seriously a sexual misconduct allegation I brought confidentially to them against Fr. Dennis Stilwell…”

The diocesan review board concluded, despite the instances of unsolicited physical contact allegedly initiated by Fr. Stilwell in the presence of at least one other person, including slaps on the buttocks, hugs, patting and rubbing Fr. Cowan’s stomach, that the allegations were not credible, according to Gaylord Diocesan Watch.

In addition to the allegations aired by Fr. Cowan, the Gaylord Diocesan Watch said that his “situation is only one of several cases our group is researching at this time.” The group anticipates presenting “information about other egregious violations of sex-abuse rules and regulations by Bishop Raica.” Moreover, the group said that the bishop has stonewalled them for at least two years and has refused to rectify “obvious scandals.”

According to Dr. Dubavec of Gaylord Diocesan Watch, the first canon law expert Fr. Cowan consulted regarding his case was Fr. Edwin Dwyer JCL, a young priest of the neighboring Diocese of Saginaw. Fr. Dwyer was removed from his parish on Jan. 30 by Bishop Walter Hurley, ostensibly because he introduced elements of the Mass that are considered traditional. Dr. Dubravec wondered, in his interview with LifeSiteNews, whether it was coincidental that two young priests of a traditional outlook were removed at nearly the same time.

The Gaylord Diocesan Watch issued a statement on Friday that Bishop Raica has refused to meet with members of the group. According to the group, a diocesan spokesperson told them that a meeting with the bishop is not necessary because of the Michigan attorney general’s ongoing investigation into diocesan policies and possible cover-ups of abuser priests.