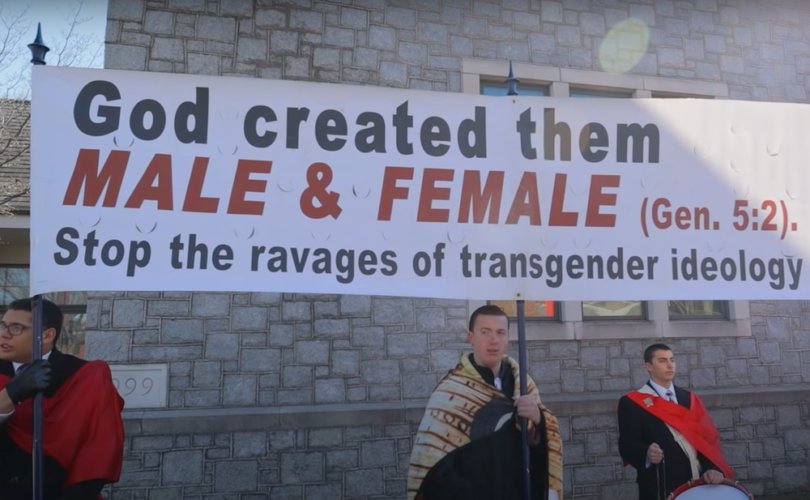 To protest the event and “defend the innocence of our children,” some 45 Catholics arrived outside the building on Sunday, February 20, where they prayed the rosary, sang hymns, chanted litanies, and played bagpipes.

Catholics participating in the protest held up signs reading “Honk to protect our children,” “Dear God: Let not the little children be perverted by Drag Queen Story Hours,” and “God created them MALE and FEMALE.”

The Catholic protesters were opposed by an assortment of woke “pastors” and LGBTQ activists who waved gay pride flags and played vulgar music in support of the Drag Queen Story Hour event.

Counter-protesters reportedly included Lutheran “pastors” along with “communists, pro-aborts, environmentalists, and satanists,” according to a statement put out by TFP.

TFP also reported that, “To block the Catholics, one pro-homosexual man parked his truck, mounted with a large rainbow flag, in front of them.”

“Another ‘pride’ advocate set up a loudspeaker and blared pro-sodomy songs,” the TFP statement continued, adding that “the stirring tunes of the bagpipes” played by TFP members “confronted the vulgar music.”

Video footage of the event shows counter-protesters, including women in clerical collars and an assortment of people with multi-colored hair, facial piercings, and rainbow flags, accusing Catholics who oppose the indoctrination of children into radical sexual ideology of being judgmental and “not real Christians.”

Naomi Asper, founder and managing director of Pride Hanover, told The Evening Sun the event was intended “to offer area youth a safe space to learn about kindness, acceptance, love, and respect for diversity and inclusion.”

Asper’s approval of the event is not shared by Catholics who believe that God made human beings male and female and that transgenderism and homosexuality violate His loving design.

According to the manual, by featuring “drag queens” who often wear “vulgar costumes,” the events also have the effect of “mocking true femininity.”