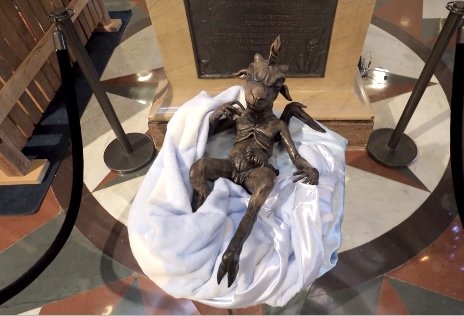 A Satanic statue is placed in the Illinois Statehouse.YouTube

SPRINGFIELD, Illinois (LifeSiteNews) – Catholics protested the installment of a satanic display at the Illinois Statehouse in Springfield last Monday.

The protest, organized in part by The American Society for the Defense of Tradition, Family and Property (TFP), a Catholic organization dedicated to fighting the culture war, was directed against a statue of a baby Baphomet in swaddling clothes placed next to the nativity display in the Statehouse Rotunda by The Satanic Temple (TST).

In a video uploaded to YouTube by TFP, a voiceover commented that “In the name of tolerance and equality, there is a war against Christianity that should be denounced and opposed.”

The video shows members of TFP and other protesters praying the Rosary, singing, and holding signs that read “Satan has no rights” and “Begone Satan! Mary crushes the head of the serpent.”

Also present at the protest was Republican state Sen. Darren Bailey, who is an Illinois gubernatorial candidate,  and his wife.

Bailey posted on his Facebook page that he “met with other prayer warriors at the Capitol today to pray for our state. We have all been appalled by some of Springfield’s extreme and evil legislation, but just when you thought it couldn’t get worse … they are going to allow a satanic display in YOUR rotunda at the Capitol.”

Bishop Thomas Paprocki of Springfield, while not present at the protest, commented during the installation of the Nativity scene on November 30 that “satanism should have no place in this Capitol or any other place.” He was apparently alluding to previous TST displays set up in the Statehouse rotunda, featuring the forearm of Eve holding an apple. Paprocki said satanism “is not a religion. True religion binds people to God and to each other in faith. The devil seeks to divide, not to unite, and the only thing that Satan worship binds its adherents to is the evil one.”

A man identified as Minister Adam, a TST member, had invited Bishop Paprocki to the installation, saying, “The Illinois Capitol is a place of religious plurality and unity … We want to celebrate all people.”

According to Adam, only 10 TST members attended the installation. Reacting to the protest, Adam  said TST was “grateful that some of [Paprocki’s] flock attended.” Other TST members commented that the singing by TFP was “beautiful.”

This year marks the third time the Satanic Temple has put up a display in the rotunda of the Statehouse in Springfield.

LifeSite reached out to the Diocese of Springfield for comment and has yet to receive a response.