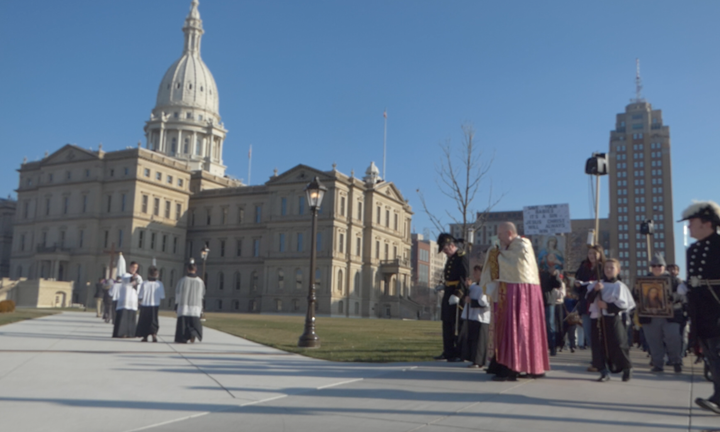 LANSING, Michigan (LifeSiteNews) — Jesus Christ and his mother, the Blessed Virgin Mary, toured the Michigan state capitol on Wednesday. Just not in the way you’d think.

A Eucharistic procession organized by GOP state Rep. Jim DeSana took place on capitol grounds this week. A statue of a crucifix and another of Our Lady of Fatima were carried by attendees and placed on the steps of the capitol building at the conclusion of the hour-long event.

Nearly 200 Catholics primarily from the east side of the state attended the ceremony, which was led in praying the rosary by Fr. John Hedges of St. Stephen’s parish in New Boston, located just south of Detroit.

DeSana is serving his first term in elected office. He currently represents the 29th District in the Statehouse, where Republicans are in the minority. They are also the minority in the Michigan Senate. A devout pro-life Catholic who supports homeschooling, DeSana told LifeSite it was great experience.

Michigan State Rep. Jim DeSana told LifeSite it was a “glorious” day at the Capitol yesterday for the Eucharistic procession in reparation for the crime of abortion. pic.twitter.com/55OvUr70Cg

“I hope to be a prayerful witness out here at the capitol for everybody to see that we as Catholics care about the unborn child,” he said. “We’re fighting for the unborn child and we’re faithful. If people in Michigan would continue to be faithful, we would have a pro-life state.”

Michigan voters overwhelmingly passed a ballot proposal that overturned the state’s constitutional ban on abortion last month. The new measure likely means abortion will be legal up until birth, depending on how future lawsuits shake out.

DeSana’s father James served as an elected official in the 1960s and 70s. A father to eight children and grandfather to many more, DeSana was sworn into office on the day of the procession. He told LifeSite that the Catholics he talked to on Wednesday were overjoyed to be there.

“People were saying that they were happy to be here, happy to be here at the state — to pray and to adore Christ — and to have that be a penitential act on behalf of the unborn. Everybody who was here today was acting penitent towards … the unborn in Michigan.”

The procession began around 10:30 a.m. on a street just north of the capitol near the headquarters of the Diocese of Lansing. Despite the chilly 40-degree temperature, Catholics young and old, including parents with children and several high school students, took part in the march. Several local media outlets covered it as well.

Massive turnout for Christ the King at the Michigan state Capitol today. pic.twitter.com/HVkwvvV49e

A group of men led the way by carrying a statue of a crucified Christ on their shoulders. Four teenage girls, meanwhile, followed behind them carrying a statue of Our Lady of Fatima. Loudspeakers blared chants and prayers in Latin throughout the duration of the procession, which was approved by capitol police. At the event’s culmination, the two statues were placed on the steps of the capitol building and a brief Benediction service took place.

One young man from Grand Rapids was thrilled with the day’s events. “To see Jesus here, at the capitol, enshrined — at least temporarily — at the seat of our government was beautiful. I hope our lawmakers will recognize and accept what we are standing up for: Christ is King!” he exuberantly told LifeSite. “I pray every day that our state becomes more Catholic.”