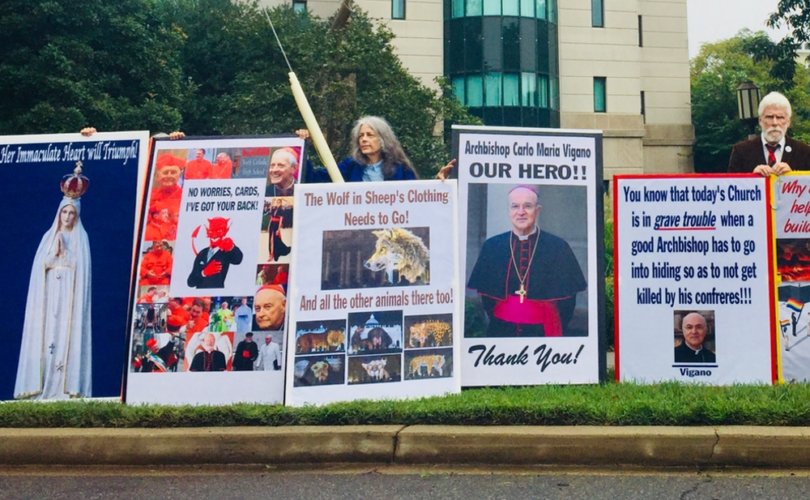 WASHINGTON, D.C., September 11, 2018 (LifeSiteNews) – A group of faithful Catholics holding large signs protested outside the USCCB National Headquarters yesterday in Washington, DC. Their message: “Abusive and homosexual clergy (and those who have been complicit by their silence) are leading many souls to perdition. The status quo has got to go!”

The group of Catholic laity came from Hampton Roads, VA, over three hours south of the Nation’s Capital.

They held signs some of them reading: “The Wolf in Sheep’s clothing needs to go!”; Archbishop Carlo Maria Viganò Our Hero!! Thank you!”; Why are our Shepherds helping  Fr. J. Martin build a bridge to Hell?!”

LifeSiteNews interviewed one of the organizers, Mrs. Frances Bouton, on the significance of this protest.

LSN: Mrs Bouton, why has this protest been organized? Who started it?

Bouton: The protest was organized by a small group of faithful Catholics from Hampton Roads, VA, and we are here to show the Bishops that the laity are not going away, this time.  Archbishop Viganó has exposed the abuse and corruption in the Church from the top to the bottom, and we are here to say, “ENOUGH!”

LSN: What is the message you’re hoping to convey?

Bouton: Abusive and homosexual clergy (and those who have been complicit by their silence) are leading many souls to perdition. The status quo has got to go!

LSN: Do you believe your voices will be heard by the members of the USCCB?

Bouton: We hope that our voices will be heard loud and clear, and we hope that many more faithful Catholics will get out and protest, also.  Write letters, make phone calls, protest–let the Church know how angry and betrayed you are!  Don’t stop until these unholy men step down or are thrown out.

LSN: Just a little over a week ago, protester shouted “shame on you” at Cardinal Wuerl, during his first public appearance. What message do you have for him or for Pope Francis (in light of the Archbishop Viganò’s Testimony)? How should the Church answer this scandal?

Bouton: The Church should answer this scandal by sending packing every single homosexual and predator priest from every diocese and every Vatican office.  Everyone knows who they are, and they need to go– immediately!  Those remaining good and faithful bishops, cardinals and clergy (along with the laity), need to take charge and make this happen.  Unfortunately, it starts with the top, with Pope Francis. (If the Viganó Testimony proves true), he needs to resign while he can still preserve his dignity.  With this testimony, we believe he has been reckless–dishonoring the chair of St. Peter.

LSN: Is there anything else you and your fellow protesters wish to convey?

Bouton: We want to say a very public “thank you” to Archbishop Viganò for his courage and love of the Church– for speaking the truth at this time. We also want to thank all the good bishops, cardinals and priests who have also spoken out and who are demanding a purification of the Church.  Together, with the faithful, let us reclaim the Holy Catholic Church for Jesus and Our Blessed Mother!

LifeSiteNews confirms that future protests are being scheduled, by this and other similar grassroots lay groups.

As news grows of State Attorneys General announcing investigations, calls for the resignation of Cardinals named in the Viganò Testimony—including Cardinal Wuerl of Washington, DC and Cardinal Cupich of Chicago—mount.

Cardinal Wuerl announced last Thursday plans for a six-week “Season of Healing”—a program that will lead up to the USCCB General Assembly. So far, the Cardinal has denied any report that he plans to resign.