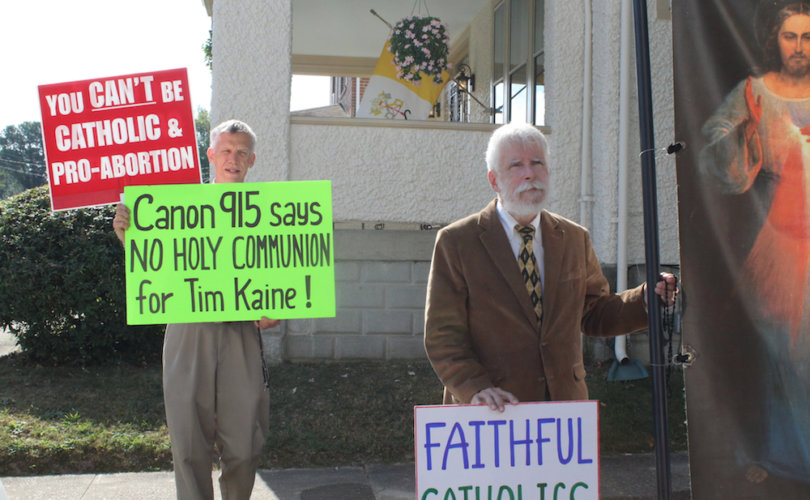 Catholics protest Tim Kaine's support for abortion in August at his parish.

Canon 915 says that individuals “obstinately persevering in manifest grave sin are not to be admitted to Holy Communion.” The Catholic Church teaches that the Eucharist is the literal body, blood, soul, and divinity of Jesus Christ.

Democratic vice presidential candidate Sen. Tim Kaine’s home diocese is Richmond. After Hillary Clinton announced Kaine as her running mate, Kaine’s parish gave him a standing ovation and his pastor praised him despite his adamant support for abortion and same-sex “marriage.”

DiLorenzo subsequently issued a statement saying Catholics have a duty to determine their own worthiness to receive Holy Communion “through an upright and informed conscience.”

A few months later, Kaine predicted that the Catholic Church will change its stance on same-sex “marriage” just like he did. He publicly admitted that he knows the Church’s stance and rejects it.

“My full, complete, unconditional support for marriage equality is at odds with the current doctrine of the Church that I still attend,” Kaine said at a dinner for a prominent LGBT advocacy group. The Catechism of the Catholic Church teaches, “Heresy is the obstinate post-baptismal denial of some truth which must be believed with divine and catholic faith” (CCC 2089). Canon 1364 of the Code of Canon Law says that heretics incur automatic excommunication.

The Catholics who gathered Tuesday prayed the Angelus, the Sorrowful Mysteries of the Rosary, and the Divine Mercy Chaplet, according to one of its leaders, Frances Bouton.

Bouton said the rally participants were praying for DiLorenzo and that he will enforce Canon 915.

“We remain respectful and very hopeful that the Bishop will do the right thing in this important situation by enforcing Canon 915, and we continue to offer our prayers for him in this regard,” Bouton told LifeSiteNews via email.

“A steady stream of folks have been writing Bishop DiLorenzo to ask him to enforce the canon,” Bouton said, so the rally came “on the heels of that.”

“Praying the rosary is always a good thing, and Bishop DiLorenzo always seeks prayers on his behalf,” Deborah Cox, the communications director for the Diocese of Richmond, told LifeSiteNews in an email. She referred LifeSiteNews to DiLorenzo’s previous statement saying Catholics should determine their worthiness to receive Holy Communion “through an upright and informed conscience” and a September 13 statement he issued affirming the Catholic Church’s unchanging teaching that marriage is between one man and one woman.

The petition the faithful delivered to DiLorenzo on the day of the prayer rally said, “Tim Kaine’s anti-Catholic positions put him squarely in opposition to Holy Mother Church. These very publicly championed positions include abortion, homosexual ‘marriage’, homosexual adoption, transgender ideology, ordination of women, and no religious freedom.”

“In short, it would appear that Tim Kaine is an enemy of the Catholic Church,” the petition continued. “But because Tim Kaine continues to call himself a Catholic in good standing, and because he is running as a vice presidential candidate, we are asking you to set the record straight by publicly disciplining Kaine under Canon 915. Catholics in America and beyond have the right to know that Tim Kaine is not a Catholic in good standing, and you, as his Bishop, are the rightful authority to whom this clarification belongs.”

The petition asked DiLorenzo to enforce Canon 915 “for the sake of our children, our children’s children, and all the millions more unborn children who will be aborted under a Hillary-Kaine administration.”

In her speech to the rally participants, Bouton outlined Kaine’s well-documented support of abortion, same-sex “marriage,” same-sex adoption, transgender ideology, women’s ordination, and the triumph of the LGBT agenda over religious freedom.

“Now that Tim Kaine is a vice presidential hopeful with Hillary Clinton, and Hillary is calling for taxpayer funding for abortions through all nine months [of pregnancy], it is totally clear that Tim Kaine has officially and willing become a consenting party to the further expansion of this most egregious and barbaric evil,” Bouton said.

Furthermore, she asked, “If Tim Kaine used his status as a Catholic senator to publicly petition the pope for women priests,” referencing a statement Kaine made around the pope’s U.S. visit, “what might we expect from him to petition for as a vice president?”

“We are still encouraging faithful Catholics from around the U.S. to very politely and respectfully write Bishop DiLorenzo,” Bouton told LifeSiteNews.