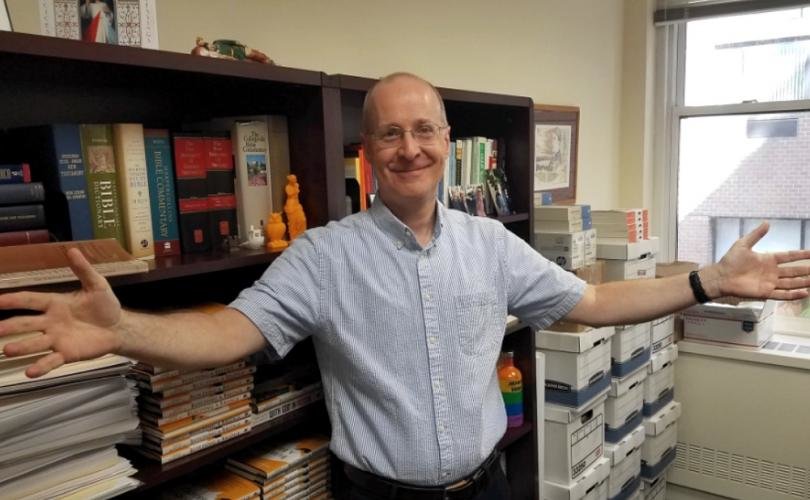 EAST GRAND RAPIDS, Michigan, December 2, 2019 (LifeSiteNews) — Pro-gay Jesuit priest Fr. James Martin is claiming that a pastor in Western Michigan is guilty of “discrimination” for asking a lesbian judge in a same-sex “marriage” to not present herself to Holy Communion. Hundreds of Catholic laity and several prominent Catholic clergy have taken to social media to refute his arguments.

Martin, ordained in 1999, is one of the most well-known promoters of normalizing homosexuality in the Catholic Church. In the past, he has supported homosexual couples kissing during the sign of peace at Mass. A LifeSite petition urging American bishops to ban him from their dioceses has acquired more than 18,500 signatures.

In a Facebook post published yesterday, Martin expressed outrage over Fr. Scott Nolan’s decision to follow Church law by refusing to administer county judge Sara Smolenski the Eucharist. He argued that priests like Fr. Nolan are singling out “married LGBT people” because they fail to also deny Communion to other Catholics who don't live by the Church’s moral teachings.

The Church's rules “must be applied across the board, not selectively, and not simply to one group of people,” Martin wrote. “And why are parishes focusing only on issues of sexual morality? Are there no other issues in the moral life? Are those who refuse to pay a living wage to employees denied Communion? How about those who do not give to the poor? Those who do not care for the environment?”

Canon 915 says that those “obstinately persevering in manifest grave sin” are not to be admitted to Holy Communion. Canon 916 of the Church's Code of Canon Law instructs Catholics in a state of mortal sin not to present themselves for Holy Communion.

Martin then wondered why more priests aren’t asking married couples if they use birth control. He also wanted to know why priests aren’t demanding young people stop going to Communion if they are engaging in pre-marital sex. “Why is it only a ‘public’ act that bars someone from receiving Communion?” he asked. Martin has made similiar arguments on many occasions over the past several years.

Judge Sara Smolenski has repeated Martin's claims during her public appearaces recently. While speaking with CNN this weekend, she said, “this feels like selective discrimination. Why choose gay people, and why now?”

Some Catholics in Grand Rapids told LifeSiteNews they think Fr. Martin is possibly acting as a sort of informal media adviser to her. That belief may not be entirely without reason. Three weeks ago, Martin met via Skype with Smolenski and a small group of her fellow parishioners from St. Stephen’s Catholic Church to discuss his LGBT-affirming book, Building a Bridge. The event was not hosted on parish property as per the request of Fr. Nolan.

Popular blogging priest Fr. Dwight Longenecker pushed back against Fr. Martin’s arguments in an essay on his personal website Standing on My Head today. In his article, Longenecker rejected the notion that Smolenski’s behavior is on par with private sins.

“Attempting to marry a person of the same sex,” Longenecker continued, “is not at the same level of commitment as a couple using birth control or IVF or someone committing fornication. All these sins are private sins and can be repented of [but] in a same sex marriage…they are saying by their words and actions, ‘Gay sex is not a sin [and] the Catholic Church is wrong and I am publicly, formally declaring that I reject the Catholic Church’s teaching.’”

Fr. Jim Chern of the Archdiocese of Newark thanked Longenecker for his essay.

Thankful Fr Longnecker that your doing what sadly too few of our Church leaders should be doing.

Fr. Thomas Petri, a Dominican priest who teaches at the Dominican House of Studies and hosts a radio show on EWTN, published a string of tweets this morning in response to Fr. Martin.

Basically, when you commit a mortal sin, it’s up to you to go to confession before you receive Holy Communion. But when you go public and insist the sin is fine or not a sin, then the Church’s ministers must deny you the Sacrament because you’re now publicly not in communion.

Fr. Alexander Laschuk, a Byzantine priest who holds a PhD and JD, and acts as the Judicial Vicar for the Archdiocese of Toronto, tweeted:

The Church has always understood an attempt at marriage to be a public statement of a fact. This is why the canonical and moral tradition does not punish isolated sexual offences as greatly as concubinage and that less than forbidden marriage. #canonlaw https://t.co/VR13FPRfG4

Chris Stefanick, an internationally acclaimed speaker and author who acts as a consultant to the U.S. Conference of Catholic Bishops, likewise tweeted his disagreement with Fr. Martin, citing the uniqueness of homosexual sins.

She should come to Church like the countless remarried/not annulled folks do who know well enough to not receive, and work on her situation with the priest & God. All are welcome. Not all should recieve every time, & that’s ok.

Several priests in the Grand Rapids Diocese have also come forward with their support for Fr. Nolan. Last Wednesday, hundreds of Catholics from across the dicoese flocked to St. Stephen's to show solidarity with him as he said Mass at 6:30 p.m. The church was overflowing with attendees. The Bishop of Grand Rapids, David Walkowiak, expressed his support of Fr. Nolan in a public letter just days after Smolenski went to the press with her greivances.

Yesterday, Smolenski attended a pro-LGBT Methodist church in Grand Rapids with her “wife.” The two participated in an “inclusive communion” service featuring bread and wine. The Catholic Church teaches that Catholics are not to receive Communion at Protestant churches. Smolenski recently told local NBC affiliate WOOD-TV 8 she considers herself a lifelong Catholic.