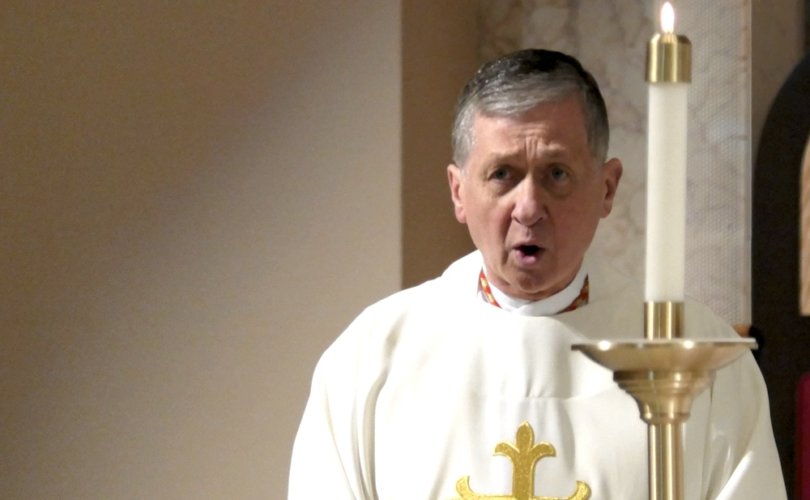 August 8, 2018 (LifeSiteNews) – According to Pope Francis-appointed Cardinal Blase Cupich of Chicago, homosexuality in the clergy isn’t the main issue in the sex abuse crisis, and saying so is a “diversion” away from the real issue, clericalism.

Cupich, one of the most left-leaning, pro-gay bishops in the country, made these comments in an interview with America magazine.

“In the weeks since allegations were made against Archbishop McCarrick, some commentators and clergy have suggested that allowing gay men to be priests has created a culture ripe for the kind of abuse Archbishop McCarrick is alleged to have committed,” the Jesuit publication reported. “But Cardinal Cupich said he ‘would be very careful’ in accepting that conclusion, noting that similar claims made during the height of the child sexual abuse crisis in the 2000s were refuted by an independent 2011 report compiled by the John Jay College of Criminal Justice.”

Cupich also praised the Dallas Charter, the U.S. bishops’ document on dealing with sex abuser priests, as having been effective at removing now ex-Cardinal Theodore McCarrick, even though it specifically avoids addressing consequences for predatory bishops. He made a number of other comments about the need for “a review to confirm if policies that already were in place were not followed” and how “shocked” he was to learn about McCarrick’s pederasty.

“Cardinal Cupich sounds more like a bureaucrat than a pastor,” Dr. Jennifer Roback Morse, Founder and President of the Ruth Institute and the author of the forthcoming book The Sexual State, told LifeSiteNews. “I am particularly concerned that he is recycling the old canard from the 2002 go-round of clerical sex abuse: ‘this has nothing to do with homosexuality.’”

“Cardinal Cupich continues the false narrative that the sex abuse scandals in 2002 had nothing to do with homosexuality when in fact, more than 80% of the cases were adult men assaulting teen boys,” the international pro-life and pro-family activist said. “Then and now this scandal has everything to do with homosexuality. We simply will not allow them to get away with this narrative, particularly since McCarrick's sexual predation was on adult men.”

George Neumayr, author of The Political Pope: How Pope Francis Is Delighting the Liberal Left and Abandoning Conservatives and a book about former President Obama’s attacks on religious freedom, had strong words for Cupich and Washington’s Cardinal Donald Wuerl, the latter of whom recently said the U.S. bishops should investigate themselves.

“These charlatans don’t need a new bureaucratic panel; they need an exorcist,” he wrote on Facebook.

Father Thomas Berg, a professor of moral theology at St. Joseph’s Seminary, tweeted that Cupich’s “immediate defensiveness about homosexuality in the priesthood…typifies what is so wrong in episcopal culture.”

The immediate defensiveness about homosexuality in the priesthood; improved H.R. policies can fix this; “someone dropped the ball” in the #McCarrick case: #rubbish @CardinalBCupich typifies what is so wrong in episcopal culture. https://t.co/Q8M6OPdw3n

Dr. Janet Smith, a moral theologian at Sacred Heart Major Seminary in Detroit, said, “I believe that [Cardinal] Cupich is correct that clericalism is a great problem in the Church perhaps as seriously for how priests and seminarians are treated by their fellow priests as laity are treated by priests. Too many priests are petty tyrants who will not share power and who wield their power to their own advantage rather than to serve others.”

“So yes, clericalism does need to be addressed and one hopes that when the problem of homosexual networks in diocese[s] and orders is eliminated, other problems in the priesthood can be addressed,” she told LifeSiteNews. “What those who are involved in homosexual networks are guilty of is not just ‘sexual misbehavior’ or ‘sexual misconduct’; it sometimes involves assault and misuse of power and just plain old mortal sin.”

Another thing Cupich said to America was that he thinks the Church needs new structures to report what the magazine described as “sexual misconduct not involving children.” America wrote:

“If there was a misstep in this, so that people did not have the means by which they could put forward a complaint with objectivity and security, [knowing] that it would be acted on, then we need to put [that] in place,” Cardinal Cupich said.

But, he said, there is no need to “invent any new machinery” in order to adopt policies for reporting such allegations.

“An H.R. department would know how to help us do that, and we should learn from those best practices,” the cardinal said.

“We have heard so many stories of priests brave enough to report immoral sexual advances and forced sexual contact that have been ignored by bishops or which have been used against the priests who report, to very much want to have an investigation into dioceses to find out whether bishops have [dealt] well or poorly with reports of priests, heterosexual and homosexual, who have behaved immorally and been reported,” Smith continued. “This is a deep ugly problem that simply good ‘HR’ offices are not capable of addressing.”

Michael Hichborn, President of the Lepanto Institute, said Cupich’s interview “shows that he is either completely out of touch with reality or he is a liar.”

“His praise [for] the Dallas Charter for the protection of children as ‘effective in removing the former Cardinal’ is a sick joke!” Hichborn told LifeSiteNews. “That charter was not only drafted by McCarrick, but it specifically omitted bishops from actionable culpability. How could it have played a role in McCarrick's removal when all of the bishops who would have known about what McCarrick was doing were complicit in covering it all up?”

Hichborn, too, noted it is bizarre that Cupich would say the John Jay reports – which showed that most priestly sex abuse cases involved post-pubescent males – proved homosexuality in the clergy is not a major issue.

“It simply isn't possible that the main driving force behind the scandal isn't homosexual priests when the vast majority of the victims are males,” he said. “And since he read the report, Cardinal Cupich knows this.”

“Given the revelations surrounding Archbishop McCarrick, it's clear that there has got to be a complete and thorough removal of ALL homosexual clergymen from the Church,” said Hichborn. “All of them! And it won't happen unless the laity not only demand it, but withhold their financial contributions to the bishops until we are sure that every single homosexual priest is removed.”

Bishops who ‘deny the homosexual angle’ should be investigated too

“The lay faithful are not going to be diverted by attempts to change the subject. Clergy living active homosexual lives are causing a lot of problems in the Church,” Dr. Morse told LifeSiteNews. “They are hurting their victims.They are also hurting the good, holy and innocent priests who are all under suspicion.”

“If the bishops won't face these problems, the laity will have to find new and imaginative ways of applying pressure,” she warned. On her blog, she crunched numbers from the John Jay reports to demonstrate how they do, in fact, show homosexuality is a big issue in clerical sex abuse cases – and that the reports are “no comfort at all in today’s context,” given they do not address harassment seminarians face from superiors and the problem of adult-on-adult sexual predation.

Ruse called for scrutiny of those in the Church who support parishes that defy Catholic teaching on sexual morality.

“Our investigations should include all those who support and promote so-called gay affirming parishes and even those who deny the homosexual angle,” he said.

Dr. Smith said a purge of sexually corrupt priests will leave the Church with a “small priesthood” but one that is more pure.

“Bishops must go through their memories and files to dig out what accusations there have been of sexually sinful behavior by priests but especially by priests involved in networks that harm other individuals,” Dr. Smith suggested. “If the bishop doesn't have ‘proof’ of the alleged immoral behavior [he needs] to use what moral means there are to obtain [it].”

“And then they should ask unrepentant priests to seek laicization. We will have a small priesthood and likely fewer parishes…but we need a [clergy] that strives at all times for holiness and who can truly manifest their stature of being ‘in persona Christi’ in more than a window dressing way,” said the professor.