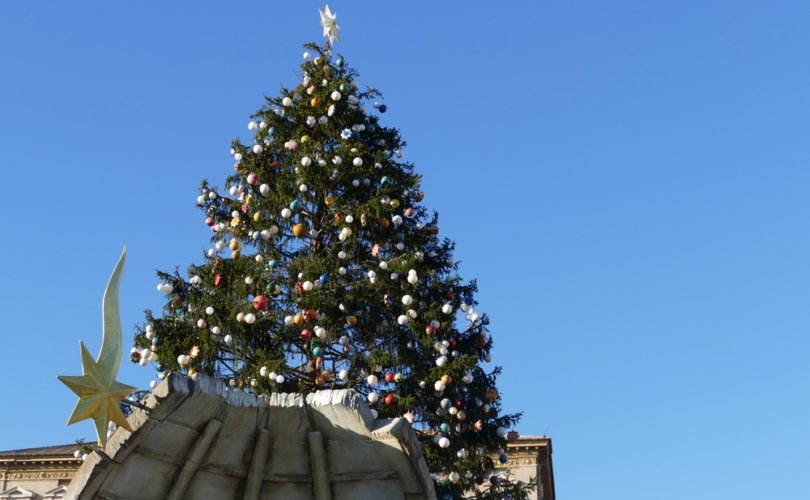 “Look,” a friend of Dr. Robert Moynihan pointed out to him. “There are peace signs, and the oriental yin-yang signs, but no angels, no depictions of the Magi, no images of Mary, nothing but universal symbols.”

“We have not seen a single religious symbol, not a single Christian symbol, on the tree.”

Continued Moynihan: “And I too saw that there seemed not to be a single Christian symbol on the tree, unless the star on the top of the tree could be considered a sign of the star that led the Magi to the Christ-child.”

The report came in Moynihan’s December 20 eLetter, which recounted his running into two friends recently while walking through St. Peter's Square. Moynihan is the founder and editor-in-chief of Inside the Vatican magazine.

Moynihan said his friends were alarmed about the tree decorations.

“Many nuns in Rome say they are shocked and are very worried about the message these decorations are sending to the youngest,” Moynihan’s friend said. “I wish I knew the Pope's secretaries to tell them to tell the Pope what is on the Square, if really the Holy Father wants to go and to bless such things. The worst thing for all these sponsors would be for the Pope not to come to the Square on December 31.”

The tree is a gift to the Vatican from Poland. It was Pope St. John Paul II who established the tradition of Christmas trees in St. Peter’s Square decades ago.

Media reports by and large on the ornaments followed the Vatican report’s lead, mentioning that the ornaments were created by children receiving treatment at several Italian hospitals and children from the Italian Archdiocese of Spoleto-Norcia, which was rocked by earthquakes in 2016.

News reports discussed the ornaments being made of synthetic materials to stand up to winter weather, but not the ornaments’ designs.

Moynihan’s friends told him that in past years, the Christmas tree had been decorated with brilliant white and yellow balls, denoting the Vatican colors.

The two said as well they had written a letter to the Government of Vatican City, protesting the decorations on the Christmas tree.

Controversy continues to swirl around the Vatican Nativity for its particular approach to using nudity. Facebook flagged the image of this year’s Nativity display for being “sexually suggestive or provocative.”

The tree and the Nativity scene are set to remain in St Peter’s Square until the evening of Sunday, January 7, 2018, when the Church celebrates the feast of the Lord’s Baptism.