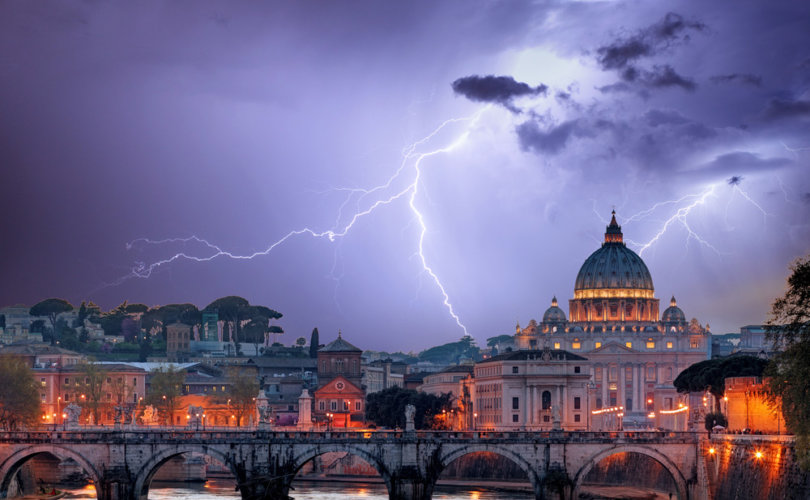 ROME, September 6, 2018 (LifeSiteNews) — Catholics from around the world are being invited to assemble, on Oct. 5, near St. Peter’s Basilica in Rome, to pray for the Church as she lives through what many see as the hour of her “Passion.”

The announcement came in a letter published on Sept. 6 on Stilum Curae, a blog hosted by respected Italian journalist Marco Tosatti. According to the letter (see full text below), an international public prayer gathering will be held at 2:30pm, on Saturday Oct. 5, 2019, at Largo Giovanni XIII in Rome, located between St. Peter’s Square and Castel Sant’Angelo.

Set to take place on the eve of the Oct. 6-27 Amazon Synod, the event will also coincide with an Oct. 5 Consistory at which Pope Francis will create 13 new cardinals.

The letter’s author, “Fr. Giuseppe,” explains: “This powerful gesture comes in response to a common sentiment: The Church is going through her Passion.”

This Passion dates back well before 2013, as Benedict XVI himself has said on several occasions. The last two years of his pontificate were also a time of intense suffering for believers; the obstacles placed along his path by open or hidden enemies were evident to all. Yet Benedict somehow acted as a dam (perhaps, in some way, he is still doing so today), but after his resignation the flood arrived.

The author notes that, little by little, Catholics have been waking up to the current crisis in the Church, and over time many people have become convinced that something “more powerful” (on the human and supernatural level) is needed than the “usual” conference.

Catholics from around the world are therefore being invited to “mobilize,” so as to offer “all believers a sign of hope, by praying to Our Lady for our beloved Church.”

Today’s invitation comes on the second anniversary of the death of Cardinal Carlo Caffarra, one of the four Dubia cardinals and the founding president of the Pontifical John Paul II Institute for Studies on Marriage and the Family.

A dedicated Facebook page, called “Let’s pray for the Church,” has been launched in several languages to spread the word about the prayer initiative. In a recent post, organizers say:

The time has come for a public gathering of prayer, offered with a supernatural vision and spirit, because the Church belongs to God and not to men. Our prayer is moved by an awareness: The Church is going through an unprecedented crisis and is surrounded by a confusion that “only a blind man could deny,” as Cardinal Carlo Caffarra once said.

This idea (in a more or less similar fashion) has been bouncing around for months and months, and now it has come true. On October 5, 2019 at 2:30 p.m., a gathering of public prayer will be held in the vicinity of St. Peter’s!

While public demonstration is not new to Italian Catholics, the October assembly will take a decidedly more peaceful tone than in centuries past.

During the conclave that elected Urban VI (1378-1389), a huge mob gathered outside the conclave shouting, “Elect an Italian or die!” This occurred shortly after Pope Gregory XI, at the prompting of St. Catherine of Siena, moved the papacy back to Rome from Avignon.

Rome had been in state of chaos for decades because the pope (the ruler of the papal states) had effectively been on holiday in France for 70 years. By this time, the cardinals were all French and were keen to move the papacy back to Avignon. The Italians, by contrast, were desperate that the papacy not be exiled again.

As there weren’t actually any Italian cardinals left, they had to elect someone who was not a cardinal, and so they elected a curial official who took the name Urban VI. He shared the view of the crowd that the papacy had been hijacked by the French and soon started treating the French cardinals with contempt. His plan was to ignore them and to replace them with Italians.

The French were furious, and claimed they were under duress when they elected him (and therefore did not do so freely). On these grounds, they elected anti-pope Clement VII and went off to Avignon, plunging the Church into the Great Western Schism for 70 years.

Here below is an English translation of the full letter on the Oct. 5 prayer initiative.

On October 5, 2019 at 2:30 p.m., a gathering of public prayer for the Church will be held in Largo Giovanni XIII, Rome. This powerful gesture comes in response to a common sentiment: The Church is going through her Passion.

This Passion dates back well before 2013, as Benedict XVI himself has said on several occasions. The last two years of his pontificate were also a time of intense suffering for believers; the obstacles placed along his path by open or hidden enemies were evident to all.

Yet Benedict somehow acted as a dam (perhaps, in some way, he is still doing so today), but after his resignation the flood arrived.

Today this is clear to everyone, but it took time to become aware of it. In April 2018, I decided to go to a conference in Rome titled “Catholic Church, where are you going?” held in honor of [deceased] Cardinal Carlo Caffarra. Only a few people from my prayer group came with me, and yet the success of that event convinced me that something was starting to happen.

When, on the other hand, I announced the October 5 meeting to my prayer group, in approximately the same words used by those who had first spoken to me about it (“The time has come for public prayer, offered with a supernatural vision and spirit, because the Church belongs to God and not to men…”), they answered me with one voice: “We will be there!”

Nothing more really needs to be said. Over time the need for a more powerful act on the human and religious level, and one more effective than the “usual” conference, has matured in the hearts of many people. Therefore, we will do so, knowing that the Lord “needs” us, and everyone, to save his barque [the Church]. I also invite your readers to mobilize. We will give all believers a sign of hope, by praying to Our Lady for our beloved Church.

Thank you for hosting my letter,