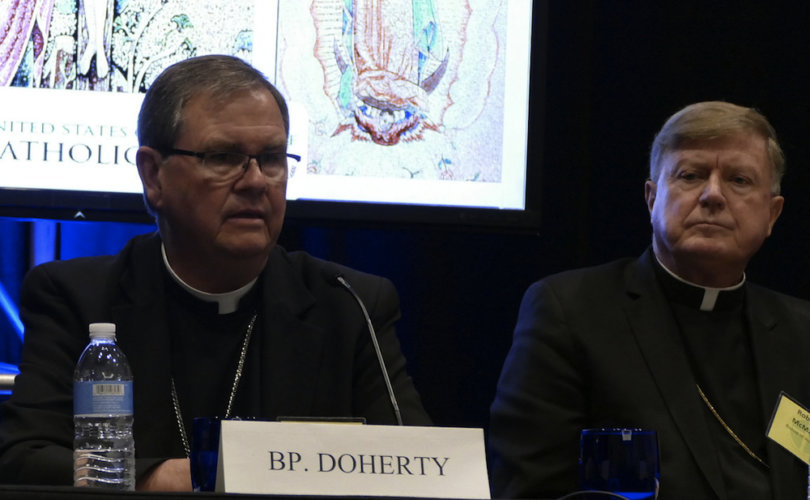 LAFAYETTE, Indiana, July 10, 2020 (LifeSiteNews) – A group of Catholics within the diocese of Lafayette, Indiana, is supporting Fr. Theodore Rothrock with a prayer vigil after he was removed from his parish last week.

Rothrock had been suspended from public ministry by Bishop Timothy L. Doherty for having spoken strongly against the Black Lives Matter and Antifa movements.

On Saturday, July 11, Catholics for Unity and Peace (CUP) will hold a prayer vigil in front of the chancery of the Diocese of Lafayette from 6 p.m. until 8 p.m. Vicki Yamasaki, one of CUP’s leaders, told LifeSiteNews that her organization will join several other prayer groups supporting the priest. “CUP plans to pray for the bishop, Fr. Ted and the diocese,” she said.

CUP was founded immediately after the removal of Fr. Rothrock “due to the overwhelming response we received to organize a movement.”

At the same time, the group wants to “be clear that our purpose expands beyond addressing the treatment of Fr. Ted. It is about defending our Catholic beliefs and our right to express those beliefs.”

CUP’s stated purpose is to defend “our Catholic beliefs and our rights to express those beliefs.” This includes, the group emphasizes, to preserve and defend “the dignity of every human being, especially people of color, the poor, and the disenfranchised.”

Yamasaki and her fellow CUP members want to provide “education about movements/organizations that infringe on our beliefs,” and “help the institutional church to provide this leadership.”

In the case of the Black Lives Matter movement, it is especially the “BLM Global Network Foundation,” the most vocal and organized part of the movement, which pushes positions contrary to Catholic teaching, as pointed out by Fr. Rothrock.

The organization, according to its website, endorses homosexuality and gender ideology. “We foster a queer‐affirming network. When we gather, we do so with the intention of freeing ourselves from the tight grip of heteronormative thinking, or rather, the belief that all in the world are heterosexual (unless s/he or they disclose otherwise).”

Additionally, Black Lives Matter wants to abolish the traditional family. “We disrupt the Western-prescribed nuclear family structure requirement by supporting each other as extended families and ‘villages’ that collectively care for one another, especially our children, to the degree that mothers, parents, and children are comfortable.”

Rothrock had asked in his parish bulletin on June 28, “Who are the real racists and the purveyors of hate?”

“You shall know them by their works,” he answered. “The only lives that matter are their own and the only power they seek is their own. They are wolves in wolves clothing, masked thieves and bandits, seeking only to devour the life of the poor and profit from the fear of others. They are maggots and parasites at best, feeding off the isolation of addiction and broken families, and offering to replace any current frustration and anxiety with more misery and greater resentment.”

The priest emphasized that the message of peace is at the heart of the gospel “we carry in common with the Orthodox Churches and other Christians.” He encouraged Catholics to stand “in solidarity with our brethren across the world to oppose this malevolent force.”

He said, “Black Lives Matter, Antifa, and the other nefarious acolytes of their persuasion are not the friends or allies we have been led to believe. They are serpents in the garden, seeking only to uproot and replant a new species of human made in the likeness of men and not in the image of God.”

“Their poison is more toxic than any pandemic we have endured,” he added. “The father of lies has not just been seen in our streets, we have invited him into our home. Now he is prowling like a roaring lion looking for someone to devour. Resist him, strong in your faith.”

Rothrock referred to abolitionist Frederick Douglass and leader of the civil rights movement Martin Luther King, Jr., asking if they would have engaged in what rioters are currently doing across the United States.

“What would the great visionary leaders of the past be contributing to the discussion at this point in time?” he asked. “Would men like Fredrick Douglas (sic) and the Reverend King, both men of deep faith, be throwing bombs or even marching in the streets? Would they be pleased with the murder rates in our cities or the destruction of our families by the welfare system? Would they see a value in the obliteration of our history to rewrite a future without the experience and struggles of the past? Would we tear down their monuments?”

Even though Fr. Rothrock later admitted that some of his message was stated “rather poorly,” and “it was not my intention to offend anyone and I am sorry that my words have caused any hurt to anyone,” Bishop Doherty removed him from his parish.

A statement by the diocese, now published on the website of St. Elizabeth Seton Catholic Church, Rothrock’s former parish, claimed, “Bishop Doherty asked Father Theodore Rothrock to step aside from public ministry because of the division and damage that was instantly felt within the parish, the diocese and the larger community following Father Rothrock’s controversial bulletin article.”

Yamasaki disputed that account in her remarks to LifeSiteNews.

“The purported division and damage was prompted by the bishop’s reaction and decision regarding Fr. Rothrock,” she explained. “The bishop did not engage the parishioner base, and is not listening to his flock. To date, we do not know of anyone who has written the bishop in support of Fr. Ted that has received a response.”

She also said “Deacon Bill’s official statement on the St. Elizabeth Seton Catholic Church website and subsequent agreement with the CARI movement demands (Carmel Against Racial Injustice) is causing confusion among the parishioners. Instead of uniting Catholics across our diocese and beyond, it is creating unrest. This is why we have created the CUP movement to foster unity and peace.”

Deacon Bill Reid, named the parish administrator, had said Fr. Rothrock’s words, regardless of his intention, “endorsed silencing the oppressed.”

Bishop Doherty, who had ended his statement to the parish last weekend by encouraging the faithful to tell everybody that “this bishop says that black lives matter,” distinguished the slogan from the organization.

“The Black Lives Matter Global Network Foundation clearly says things that I oppose,” he pointed out. At the same time, he qualified his remarks by emphasizing that this group “is only one organization among many dozens using the phrase BLM, and it is a mistake to say that that foundation is the headquarters of what is a very diverse movement.”

Yamasaki took issue with that interpretation, arguing that “like in business,” the “branding” for Black Lives Matter “has become synonymous” with the BLM Global Network Foundation.

LifeSiteNews has seen several of the letters sent by faithful in support of Fr. Rothrock to Bishop Doherty. One of them said “Fr. Ted is not just looking out for his flock, his community, and every American citizen, but even those people in the BLM movement, Antifa, and other groups who are trying to dominate others.”

“He wants those people to look at themselves and realize how they have degenerated — how did he put it — ‘They are serpents in the garden, seeking only to uproot and replant a new species of human made in the likeness of men and not in the image of God,’” the letter continued. “He’s calling for REPENTANCE! He wants them to come to Jesus Christ and be saved!”

A petition launched by LifeSiteNews in support of Fr. Rothrock has already garnered more than 33,000 signatures. Readers can sign it by clicking here.