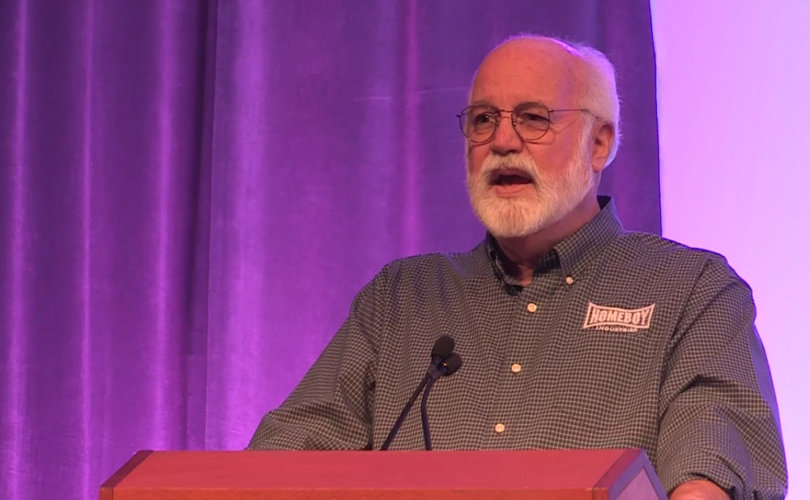 SANTA ANA, California, October 13, 2017 (LifeSiteNews) — A group of California Catholics concerned that their diocese is hosting a dissident priest as the keynote speaker for its annual lay ministry event will gather to pray the rosary outside the venue on Saturday during his appearance.

The Catholics will gather at the corner of Bristol and Edinger Streets across from Mater Dei High School in Santa Ana from 10:45 a.m. to noon to pray for the United States, the Diocese of Orange, and the conversion of Jesuit Father Greg Boyle.

Boyle is a member of the Jesuit order, performing ministry within the Archdiocese of Los Angeles. He is known for his longtime work with incarcerated and gang-involved individuals.

In the course of a 2010 interview during the debate on California’s Proposition 8 referendum banning same-sex “marriage,” he criticized the U.S. Bishops’ position on the measure, which was in line with the Catholic Church’s opposition to homosexual “marriage.” He described it as “demonizing people,” and said Church teaching on same-sex attraction and gay “marriage” was the opposite of what God says.

And he mocked Church teaching on reception of the Eucharist for individuals married outside the Church.

The Diocese of Orange anticipates that 1,500 people will attend its daylong “Encounter, Connect, Evangelize” event for which Boyle is set to keynote. The diocese’s Institute for Pastoral Ministry, which trains catechists, sponsors the lay ministry event.

Local Catholics who contacted to diocese to express concern were told the matter was being dealt with, but no additional specifics were provided. They were also advised that  Boyle’s speaking engagement had been scheduled last year and he would not discuss gay “marriage” or women’s ordination.

The diocese provided the same statement to LifeSiteNews, admitting that Boyle’s comments were “indeed disturbing” while downplaying them. The statement said he was a priest in good standing

LifeSite also contacted the Los Angeles Archdiocese for comment and did not receive a response.

The group of Catholics drafted a petition in the wake of the response, asking Orange Bishop Kevin Vann to reconsider Boyle’s speaking engagement for the diocese.

They are extremely concerned about scandal and confusion created by a priest who publicly dissents from Catholic Church teaching speaking at a Catholic venue. They have genuine worry over the message it sends and the potential for leading attendees astray.

Various groups around the country are sponsoring rosary rallies to pray for the country and society at large in conjunction with the 100th anniversary of the apparitions of Our Lady of Fatima. The final apparition, containing the miracle of the sun, occurred on October 13, 1917.

Fatima rosary gatherings are being organized nationwide Saturday for peaceful public prayer to God through the intercession of Our Lady, with general intentions of reparation for abortion, contraception, cohabitation, same-sex “marriage,” and the threat of nuclear war.

The Orange diocese event incorporates the Diocese of Orange and the conversion of Father Boyle into the intentions as well.